Bitexco Financial Tower (Vietnamese: Tháp Tài chính Bitexco) is a skyscraper in Ho Chi Minh City, Vietnam. At its completion in 2010, it became the tallest building in Vietnam and kept this status until January 2011, when it was surpassed by Keangnam Hanoi Landmark Tower. With 68 floors above ground and three basements, the building has a height of 262.5 metres (861 ft), making it the second tallest building in the city, fifth tallest in Vietnam, and the 263rd tallest in the world, as of the beginning of 2018.[3]

The tower is owned by Bitexco Group, a Vietnamese multi-industry corporation, with a focus on real estate development. The building also houses the Ho Chi Minh City office of Bitexco Group, while its headquarters are in Hanoi.[4]

The tower was designed by Carlos Zapata, Design Principal and Founder of Carlos Zapata Studio, with French company AREP as architect of record. Designer Zapata, who was born in Venezuela but is based in New York City, drew inspiration for this skyscraper's unique shape from Vietnam's national flower, the Lotus.[5]

Ground view of the tower.

The groundbreaking ceremony was held in September 2005. Two years later, in June 2007, construction of the tower started. The tower topped out in mid-2010 and had its inauguration ceremony on 31 October 2010.

Amongst other international awards and recognitions, on 30 November 2011, Bitexco Financial Tower received the "Excellence in structure engineering awards 2011" in the "International structure over $100 million" category. NCSEA.[7]

Bitexco Financial Tower is a mixed use project which includes office, retail, F&B and entertainment space. The tower has around 38,000 square metres of office space, from 7th to 65th floors, and a five-storey retail podium, Icon68, including food court and seven screen multiplex cinema with around 10,000 square metres from Ground to 4th Floors. At Floor 49, at height around 178 metres, there is an observation deck open to the public.

Vietnam's first non-rooftop helipad is on the 52nd floor of the Bitexco Financial Tower. The helipad extends 22 meters out from the main structure. It is strong enough to carry a helicopter up to 3 tons of weight.

The glass from Belgium was purchased and shipped to China for manufacturing. Once in China the low iron heat strengthened glass was cut into 6,000 individual panels. Each panel is double glazed with the outside layer being 8 mm thick and internal air space of 12 mm and an internal panel of 8 mm. Finally the glass was shipped to Ho Chi Minh City and the panels were installed as the building grew higher. Each of the 6,000 sleek glass panels enveloping the Bitexco Financial Tower is individually cut to unique specifications because each floor is unique, giving the building its eye-catching shape.

Located on the southern side of the Bitexco Financial Tower, the helipad cantilevers from the 52nd floor and resembles a blossoming lotus bud.[3]

Constructed from more than 250 tons of structural steel and requiring 4,000 ultra-strong bolts to hold it together, the helipad took almost a year to plan, build and coordinate before it could be hoisted to its place at height around 191 meters. Its installation alone took about two months.

Most of the materials used to construct the helipad were purchased from Europe and South Korea and the manufacturing took place in Bu Gang, a city near Seoul. Once the fabrication of the helipad was completed, it was shipped to Vietnam.

To ensure proper assembly, the entire helipad was pre-assembled on the ground of a factory in Đồng Nai Province in Vietnam – a process that took about three weeks. 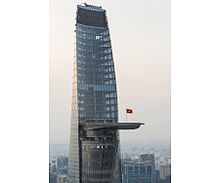 Bitexco Financial Tower operates Otis double-deck elevators with specialised Compass System which is the most modern and advanced elevator system in Vietnam. With speed up to 7 meters per second, it was the fastest lift system in South East Asia at the time of installation. There are 3 separate elevator zones servicing the tower with 14 passenger and 2 service lifts, plus further lifts to serve the retail and parking areas.

The following is the breakdown of floors.[9][10]

Due to the rapid economic growth of Saigon in particular and dynamic economic development of Vietnam in general, the construction of office buildings in Ho Chi Minh City has been rapid. Bitexco Financial Tower has fulfilled the need for international standard office space in this city. The unit price of prime grade offices now in Saigon can be up to US$40/metre square/per month or more,[citation needed] for the most demanded space. Since the opening up and growth of the Vietnamese economy, both foreign and domestic enterprises have invested significantly in the construction of high-rise buildings in Vietnam. Before 1995, Saigon city centre featured generally French Colonial and other rather basic low-lying buildings. Since then, the city has seen a dramatic increase in high-rise buildings as the country has often maintained an average 8–8.5% annual GDP growth rate. Saigon, the country's economic hub, has achieved 12% GDP growth rate, at some times, although this has been dampened in recent years by the general world recession but not as greatly as has been felt in other parts of the world.[11]