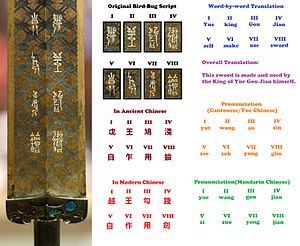 Other names for this kind of seal script:

There are two subcategories (sub-styles):

Seal script evolved from oracle bone script, and diverged into different forms in the Spring and Autumn period, after the power of the Zhou dynasty waned and China began to divide into different states.

These kinds of seal script declined after the Qin Dynasty, most likely due to the unification of writing scripts by Qin Shi Huang (unified into the small seal script), after his unification of China, although they were used during the Han Dynasty.[2]

The worm seal script is more common in, and probably originated from the Wu Kingdom (now roughly Jiangsu Province) or Chu Kingdom (now roughly Hunan Province and Hubei Province). Examples can be seen on antique bronze weapons, containers, jades, and seals (mainly the bronze seals of Han Dynasty),[4] and constructional or decorative parts like tiles, etc. The characters on the famous Spear of Fuchai are a good example of this category of seal script.