Burning plant-derived biomass releases CO2, but it has still been classified as a renewable energy source in the EU and UN legal frameworks because photosynthesis cycles the CO2 back into new crops. In some cases, this recycling of CO2 from plants to atmosphere and back into plants can even be CO2 negative, as a relatively large portion of the CO2 is moved to the soil during each cycle.

Cofiring with biomass has increased in coal power plants, because it makes it possible to release less CO2 without the cost associated with building new infrastructure. Co-firing is not without issues however, often an upgrade of the biomass is most beneficial. Upgrading to higher grade fuels can be achieved by different methods, broadly classified as thermal, chemical, or biochemical (see below). 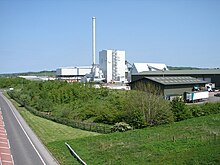 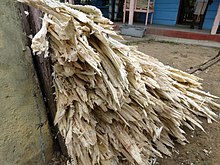 Bagasse is the remaining waste after sugar canes have been crushed to extract their juice. 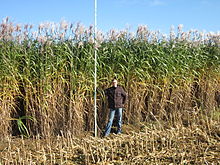 Historically, humans have harnessed biomass-derived energy since the time when people began burning wood fuel.[3] Even in 2019, biomass is the only source of fuel for domestic use in many developing countries. All biomass is biologically-produced matter based in carbon, hydrogen and oxygen. The estimated biomass production in the world is approximately 100 billion metric tons of carbon per year, about half in the ocean and half on land.[4]

Wood and residues from wood, for instance spruce, birch, eucalyptus, willow, oil palm, remains the largest biomass energy source today.[3] It is used directly as a fuel or processed into pellet fuel or other forms of fuels. Biomass also includes plant or animal matter that can be converted into fuel, fibers or industrial chemicals. There are numerous types of plants, including corn, switchgrass, miscanthus, hemp, sorghum, sugarcane, and bamboo.[5] The main waste energy feedstocks are wood waste, agricultural waste, municipal solid waste, manufacturing waste, and landfill gas. Sewage sludge is another source of biomass. There is ongoing research involving algae or algae-derived biomass.[6] Other biomass feedstocks are enzymes or bacteria from various sources, grown in cell cultures or hydroponics.[7][8]

Based on the source of biomass, biofuels are classified broadly into two major categories:

First-generation biofuels are derived from food sources, such as sugarcane and corn starch. Sugars present in this biomass are fermented to produce bioethanol, an alcohol fuel which serve as an additive to gasoline, or in a fuel cell to produce electricity.[9] 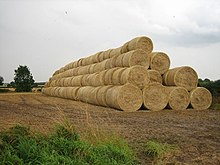 Thermal conversion processes use heat as the dominant mechanism to upgrade biomass into a better and more practical fuel. The basic alternatives are torrefaction, pyrolysis, and gasification, these are separated principally by the extent to which the chemical reactions involved are allowed to proceed (mainly controlled by the availability of oxygen and conversion temperature).[11]

There are other less common, more experimental or proprietary thermal processes that may offer benefits, such as hydrothermal upgrading.[12] Some have been developed for use on high moisture content biomass, including aqueous slurries, and allow them to be converted into more convenient forms.

A range of chemical processes may be used to convert biomass into other forms, such as to produce a fuel that is more practical to store, transport and use, or to exploit some property of the process itself. Many of these processes are based in large part on similar coal-based processes, such as the Fischer-Tropsch synthesis.[13] Biomass can be converted into multiple commodity chemicals.[14]

Glycoside hydrolases are the enzymes involved in the degradation of the major fraction of biomass, such as polysaccharides present in starch and lignocellulose. Thermostable variants are gaining increasing roles as catalysts in biorefining applications, since recalcitrant biomass often needs thermal treatment for more efficient degradation.[16]

Above-ground biomass in forest per hectare[21]

On combustion, the carbon from biomass is released into the atmosphere as carbon dioxide (CO2). After a period of time ranging from a few months to decades, the CO2 produced from combustion is absorbed from the atmosphere by plants or trees. However, the carbon storage capacity of forests may be reduced overall if destructive forestry techniques are employed.[22][23][24][25]

All biomass crops sequester carbon. For example, soil organic carbon has been observed to be greater below switchgrass crops than under cultivated cropland, especially at depths below 30 cm (12 in).[26] For Miscanthus x giganteus, McCalmont et al. found accumulation rates ranging from 0.42 to 3.8 tonnes per hectare per year, [27] with a mean accumulation rate of 1.84 tonne (0.74 tonnes per acre per year),[28] or 20% of total harvested carbon per year.[29] The grass sequesters carbon in its continually increasing root biomass, together with carbon input from fallen leaves. Typically, perennial crops sequester more carbon than annual crops because the root buildup is allowed to continue undisturbed over many years. Also, perennial crops avoid the yearly tillage procedures (plowing, digging) associated with growing annual crops. Tilling induces soil aeration, which accelerates the soil carbon decomposition rate, by stimulating soil microbe populations. Also, tilling makes it easier for the oxygen (O) atoms in the atmosphere to attach to carbon (C) atoms in the soil, producing CO2.[30] 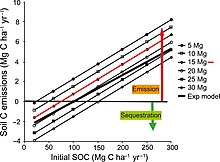 The simple proposal that biomass is carbon-neutral put forward in the early 1990s has been superseded by the more nuanced proposal that for a particular bioenergy project to be carbon neutral, the total carbon sequestered by a bioenergy crop's root system must compensate for all the emissions from the related, aboveground bioenergy project. This includes any emissions caused by direct or indirect land use change. [31] Many first generation bioenergy projects are not carbon neutral given these demands. Some have even higher total GHG emissions than some fossil based alternatives.[32][33][34] Transport fuels might be worse than solid fuels in this regard.[35]

Some are carbon neutral or even negative, especially perennial crops.[citation needed] The amount of carbon sequestrated and the amount of GHG (greenhouse gases) emitted affect how the total GHG life cycle cost of a bioenergy project develops. Specifically, a GHG/carbon-negative life cycle is possible if the total below-ground carbon accumulation more than compensates for the above-ground total life-cycle GHG emissions. Biomass releases carbon dioxide gas that was absorbed during its growth cycle, indicating that released gas can be processed by photosynthetic methods.[36] Plants that are the source of the biomass may be a carbon-neutral energy source.[37]

Forest-based biomass projects has received criticism for ineffective GHG mitigation from a number of environmental organizations, including Greenpeace (who in early 2000's were early supporters of biomass but changed their position by end of the decade[39]) and the Natural Resources Defense Council. Environmental groups also argue that it might take decades for the carbon released by burning biomass to be recaptured by new trees.[40][41] Biomass burning produces air pollution in the form of carbon monoxide, volatile organic compounds, particulates and other pollutants.[42][43][44] In 2009 a Swedish study of the giant brown haze that periodically covers large areas in South Asia determined that two thirds of it had been principally produced by residential cooking and agricultural burning, and one third by fossil-fuel burning.[45] The use of wood biomass as an industrial fuel has been shown to produce fewer particulates and other pollutants than the burning seen in wildfires or open field fires.[46]

As of 2020 biomass made 60% of European Union's renewable energy and received widespread criticism of its environmental impact, especially excessive land usage and excessive carbon emissions due to transporting biomass at large distances,[47] triggered EU review of its policy towards biomass.[48][49]

Regulatory requirement to use specific amount of biomass in EU created huge demand which is not being satisfied locally and is fulfilled by imports: for example, biomass from Poland is exported to German power plants, creating shortages in Poland,[50] so plants in Poland import it from distant locations such as Russia or Malaysia.[51] One power plant in Poland imports 7000 tons of wood each month from Komi Republic in Russia, 7000 km away.[52] UK power plants import over 6 millions of tons of wood from United States 7400 km away[47] as well as from Canada, Eastern Europe and Portugal, with 65% of the biomass being imported.[53] Contrary to popular belief, majority of the wood burned as biomass is not "wood residues" from sawmills etc (which only make 0.9%) but trees farmed specifically for this purpose.[53] Large-scale illegal logging is also a significant problem in Eastern Europe[54] and Russia.[55]

Carbon intensity of biomass can be higher than coal according to a 2014 UK study.[56]

Average surface power density of biomass is 0.08 W/m2 which is one of the lowest of all industrial energy sources.[57]