Formerly the capital of the princely state of Bikaner, the city was founded by Rao Bika in 1488 CE[2][3] and from its small origins it has developed into the fourth largest city in Rajasthan. The Ganges Canal, completed in 1928, and the Indira Gandhi Canal, completed in 1987, facilitated its development. 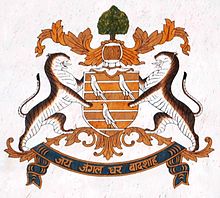 Prior to the mid 15th century, the region that is now Bikaner was a barren wilderness called Jangladesh.[4] Rao Bika established the city of Bikaner in 1488. He was the first son of Maharaja Rao Jodha of the Rathore clan, the founder of Jodhpur and conquered the largely arid country in the north of Rajasthan. As the first son of Jodha he wanted to have his own kingdom, not inheriting Jodhpur from his father or the title of Maharaja. He therefore decided to build his own kingdom in what is now the state of Bikaner in the area of Jangladesh. Though it was in the Thar Desert, Bikaner was considered an oasis on the trade route between Central Asia and the Gujarat coast as it had adequate spring water. Bika's name was attached to the city he built and to the state of Bikaner ("the settlement of Bika") that he established. Bika built a fort in 1478, which is now in ruins, and a hundred years later a new fort was built about 1.5 km from the city centre, known as the Junagarh Fort.[5][6][7]

Around a century after Rao Bika founded Bikaner, the state's fortunes flourished under the sixth Raja, Rai Singhji, who ruled from 1571 to 1611. During the Mughal Empire's rule in the country, Raja Rai Singh accepted the suzerainty of the Mughals and held a high rank as an army general at the court of the Emperor Akbar and his son the Emperor Jahangir. Rai Singh's successful military exploits, which involved winning half of Mewar kingdom for the Empire, won him accolades and rewards from the Mughal emperors. He was given the jagirs (lands) of Gujarat and Burhanpur. With the large revenue earned from these jagirs, he built the Chintamani Durg (Junagarh fort) on a plain which has an average elevation of 760 feet (230 m). He was an expert in arts and architecture, and the knowledge he acquired during his visits abroad is amply reflected in the numerous monuments he built at the Junagarh fort.[5][7][8]

Maharaja Karan Singh, who ruled from 1631 to 1639, under the suzerainty of the Mughals, built the Karan Mahal palace. Later rulers added more floors and decorations to this Mahal. Anup Singh Ji, who ruled from 1669 to 1698, made substantial additions to the fort complex, with new palaces and the Zenana quarter, a royal dwelling for women and children. He refurbished the Karan Mahal with a Diwan-i-Am (public audience hall) and called it the Anup Mahal. Maharaja Gaj Singh, who ruled from 1746 to 1787 refurbished the Chandra Mahal (the Moon Palace).

During the 18th century, there was an internecine war between the rulers of Bikaner and Jodhpur and also amongst other thakurs, which was put down by British troops.[7]

Following Maharaja Gaj Singh, Maharaja Surat Singh ruled from 1787 to 1828 and lavishly decorated the audience hall (see illustration) with glass and lively paintwork. Under a treaty of paramountcy signed in 1818, during Maharaja Surat Singh's reign, Bikaner came under the suzerainty of the British, after which the Maharajas of Bikaner invested heavily in refurbishing Junagarh fort.[9]

Left: Lalgarh Palace, built (Indo-Saracenic style) for Maharaja Ganga Singh and named after his father, presently a heritage hotel and also a residence of the Bikaner Royal Family. Right: Ganga Singh as a member of the Imperial War Cabinet at No. 10 Downing Street, 1917.

Dungar Singh, who reigned from 1872 to 1887, built the Badal Mahal, the 'weather palace', so named in view of a painting of clouds and falling rain, a rare event in arid Bikaner.

General Maharaja Ganga Singh, who ruled from 1887 to 1943, was the best-known of the Rajasthan princes and was a favourite of the British Viceroys of India. He was appointed a Knight Commander of the Order of the Star of India, served as a member of the Imperial War Cabinet, represented India at the Imperial Conferences during the First World War and the British Empire at the Versailles Peace Conference. His contribution to the building activity in Junagarh involved separate halls for public and private audiences in the Ganga Mahal and a durbar hall for formal functions. He also built the Ganga Niwas Palace, which has towers at the entrance patio. This palace was designed by Sir Samuel Swinton Jacob, the third of the new palaces built in Bikaner. He named the building Lalgarh Palace in honour of his father and moved his main residence there from Junagarh Fort in 1902. The hall where he held his Golden Jubilee (in 1938) as Bikaner's ruler is now a museum.[7][9][10]

Ganga Singh's son, Lieutenant-General Sir Sadul Singh, the Yuvaraja of Bikaner, succeeded his father as Maharaja in 1943, but acceded his state to the Union of India in 1949. Maharaja Sadul Singh died in 1950, being succeeded in the title by his son, Karni Singh (1924-1988).[6] The Royal Family still lives in a suite in Lalgarh Palace, which they have converted into a heritage hotel.[7][9] 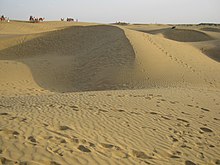 Bikaner is situated in the middle of the Thar desert and has a hot desert climate (Köppen climate classification BWh) with very little rainfall and extreme temperatures. In summer temperatures can exceed 48 °C, and during the winter they may dip below freezing.

Bikaner railway station is a major Railway Junction in North Western Railway zone of Indian Railways. The first Railway link to Bikaner was established in 1891 & it has undergone many administrative modifications since then.

Bikaner has Domestic Civil Airport Nal Airport which is located 15 km west of the city. Regular flights to Jaipur JAI and Delhi DEL commenced in 2017-18 under UDAN scheme of Narendra Modi Govt.[14][15]

The city is most famous for its savoury snack Bikaneri bhujia which is sold all over the world[16] and also have Geographical Indication tag[17] to keep its originality intact.[18] Other special Food items for which Bikaner is well known are Bajre ki Roti (Chapati made up of Pearl millet flour), Dal baati Churma, Ghevar, Halvas, Papads/Papadum, Rasgulla, Gulab Jamun, etc. The Kachori and Samosa can be seen/purchased at every nook and corner are highly recommended by the locals. Rajasthani sweets(mithai) & snacks(namkeen) fondly attracts everyone.[19][20][21] 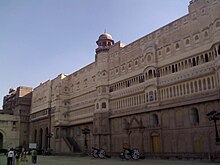 The Junagarh Fort was built around 1594 AD by Raja Rai Singh. The fort was originally called Chintamani. It is one of the few major forts in Rajasthan which was not built on hilly terrain. The modern city of Bikaner has developed around the fort. The fort is studded with temples, grand palaces and huge pavilions and walls. In 1961, a museum was set up by Maharaja Karni Singh.[22] Its temples and palaces are preserved as museums and provide insight into the grandiose living style of the past Maharanas of Rajasthan.

The Laxmi Niwas Palace is a former residential palace built by Maharajah Ganga Singh, the ruler of the former state of Bikaner. It was designed by the British architect, Samuel Swinton Jacob in the year 1902. The style of architecture is Indo-Saracenic. It is now a luxury Heritage hotel owned by the royal family of Bikaner.

The Karni Mata (करणी माता) Temple or the Rat Temple of Rajasthan is situated around 30 km away from the Bikaner city and is dedicated to Karni Mata, a famous mystic of her times, believed to be an incarnation of goddess Durga. The locals will be quick to point out that the creatures running around in the temple are not rats, they are kaabe (plural, kaaba singular). Kaabe are believed to be reincarnations of humans who had been devotees of Karni Mata, and the brevity of human life did not sufficiently satisfy their devotion.

The shrine of Karni Mata can be found in the town of Deshnoke 30 km south from Bikaner on the road to Jodhpur. Karni Mata is worshiped as an incarnation of Goddess Durga.

The Mukam Temple can be found in nearby Nokha. The Mukam is a holy place of 29 rules of followers of Bishnois. Bishnoi sect was founded by Guru Jambeshwar. Bishnois are quite protective of nature. Mukam Temple is the place where the soul of guru Jambeshwar lies.

Built by Maharaja Rao Lunkaran, Shri Laxminath Temple is one of the oldest temples in Bikaner and just 4 kilometres away from the famous Junagarh Fort. Lord Vishnu and Goddess Laxmi, grace the sacred sanctum of the temple. The most exquisite artwork inside the temple apart from the shrines is the doorway which is embellished in silver work. Festivals like Janmashtmi, Nirjala Ekadashi, Rama Navami, Diwali and Gita Jayanti are majorly celebrated at the temple.[23] 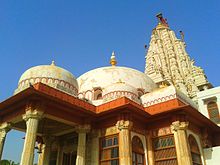 Bhandasar Jain Temple is known for its beautiful leaf paintings, frescoes and ornamented mirror work. This temple was constructed by Bhandasa Oswal in the 15th century. This temple is constructed using red sandstone with beautiful paintings on walls and pillars of the sanctum and mandapa. The temple is dedicated to the 5th Tirthankara sumatinatha. The temple consist of garbhagriha, antarala, mahamandapa, and ardhamandapa.[24]

A variety of wild animals including various birds, mammals and reptiles are found in Bikaner's Semi-Arid climate. Initiatives are being taken to bring back the number of vultures which have dwindled at a staggering rate before. There are around 600 resident vultures at Jorbeer. The region is host to another 1200 migratory vultures. Local varieties include Egyptian and King Vultures. The most common migratory vulture is Eurasian Griffon coming from Spain and Turkey. Other migratory vultures include Cinereous and Himalayan Griffons.[25][26]

National Research Centre on Camels was established in 1984 in Bikaner by the Central Government under Indian Council of Agricultural Research at the outskirts of Bikaner city to promote research & development related to camels such as effective breeding, utilisation of camel milk. Scientists engage with all stakeholders like Camel herders, traders via collaborative programmes & significant growth had been made.[28] A camel museum is available to apprise them of the developmental and research aspects of the camel in the desert ecosystem. Maharaja Ganga Singh of the Indian State of Bikaner founded Bikaner Camel Corps around 1890. It participated in World Wars & now falls under BSF India.[29][30][31]

The Rajasthan government has decided to set up its first cow sanctuary in Bikaner. It has a dedicated Ministry of Cow Husbandry. The sanctuary is likely to be set up near Amarpura village, about 70 km from Bikaner.[32]

The city celebrates its foundation day on Akshaya Tritiya by flying kites and eating special Rajasthani food that includes Bajre Ka Khichda and Imli ka Paani (Tamarind Water) among other snacks. The celebration lasts for two days, known as Chhoti Akha Teej and Badi Akha Teej. People can be seen flying kites during these two days right from the early morning at 5-6 am till late sunset.

International Camel Festival is held every year in January. Organised by the Department of Tourism, Art and Culture, the city celebrates the festival in honour of the "Ship of the Desert – The Camel". Beautifully adorned camels and performances by artists from different regions are the key attraction for both domestic and foreign tourists. The event includes spectacular camel performances like Camel dances, Camel races, Neck shaking Camel rides.

Competitions like Mr Bikana and Miss Marwan are also held during the festival.[36][37]