Bernard Jean Étienne Arnault (French: [bɛʁnaʁ ʒɑ̃ etjɛn aʁno]; born 5 March 1949) is a French billionaire businessman and art collector.[2][3] He is the chairman and chief executive of LVMH Moët Hennessy – Louis Vuitton SE, the world's largest luxury-goods company. In April 2018, he became the richest person in fashion, topping Zara's Amancio Ortega.[4] Arnault briefly surpassed Jeff Bezos to become the richest person in the world in December of 2019.[5] He again became the world's richest person for a short time in January 2020.[6] [1]

Bernard Jean Étienne Arnault was born on 5 March 1949, in Roubaix, France.[7][8] His father, manufacturer Jean Léon Arnault, was a graduate of École Centrale Paris.[8] His mother, Marie-Josèphe Savinel, had a "fascination for Dior", and was the daughter of Étienne Savinel, who entrusted her husband with the management of his civil engineering company Ferret-Savinel in 1950, and later its ownership.[8] Ferret-Savinel later became Ferinel, and then the George V Group, before selling its real estate assets to Compagnie Générale des Eaux (CGE), and the real estate business eventually became Nexity.

Arnault was educated at the Lycée Maxence Van Der Meersch in Roubaix, and the Lycée Faidherbe in Lille.[9][10] In 1971, he graduated from the École Polytechnique, France's leading engineering school, and began work for his father's company.[8] 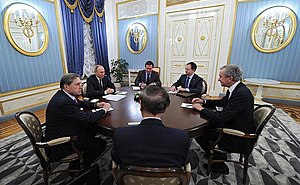 In 1984, with the help of Antoine Bernheim, a senior partner of Lazard Frères, Arnault acquired the Financière Agache, a luxury goods company.[11] He became the CEO of Financière Agache and subsequently took control of Boussac Saint-Frères, a textile company in turmoil. Boussac owned Christian Dior, the department store Le Bon Marché, the retail shop Conforama, and the diapers manufacturer Peaudouce. He sold nearly all the company's assets, keeping only the Christian Dior brand and Le Bon Marché department store.[12]

In July 1988, Arnault provided $1.5 billion to form a holding company with Guinness that held 24% of LVMH's shares. In response to rumors that the Louis Vuitton group was buying LVMH's stock to form a "blocking minority", Arnault spent $600 million to buy 13.5% more of LVMH, making him LVMH's largest shareholder. In January 1989, he spent another $500 million to gain control of a total of 43.5% of LVMH's shares and 35% of its voting rights, thus reaching the "blocking minority" that he needed to stop the dismantlement of the LVMH group. On 13 January 1989, he was unanimously elected chairman of the executive management board.[13]

Since then, Arnault has led the company through an ambitious development plan, transforming it into one of the largest luxury groups in the world, alongside Swiss luxury giant Richemont and French-based Kering. In eleven years, the sales and profit rose by a factor of 5, and the market value of LVMH multiplied by 15. He promoted decisions towards decentralizing the group's brands. As a result of these measures, the brands are now viewed as independent firms with their own history.

In July 1988, Arnault acquired Céline.[14] In 1993, LVMH acquired Berluti and Kenzo. In the same year, Arnault bought out the French economic newspaper La Tribune.[15] The company never achieved the desired success, despite his 150 million euro investment, and he sold it in November 2007 in order to buy a different French economic newspaper, Les Échos, for 240 million euros.[16][17]

In the 1990s, Arnault decided to develop a centre in New York to manage LVMH's presence in the United States. He chose Christian de Portzamparc to supervise this project.[21] The result was the LVMH Tower that opened in December 1999.[22]

From 1998 to 2001, Arnault invested in a variety of web companies such as Boo.com, Libertysurf, and Zebank through his holding Europatweb. Groupe Arnault also invested in Netflix in 1999.[27]

In 2008, he entered the yacht business and bought Princess Yachts for 253 million euros.[29] He subsequently took control of Royal van Lent for an almost identical amount.[30].

In 1998, with businessman Albert Frère he purchased Château Cheval Blanc in a personal capacity. LVMH acquired Arnault's share in 2009[31] to add to the group's other wine property Château d'Yquem.

Arnault's family pledged €200 million to help repair the Notre-Dame cathedral after a fire, said a statement issued on behalf of Arnault, but never did.[32]

Arnault's collection includes work by Picasso, Yves Klein, Henry Moore, and Andy Warhol. [33][34] He was also instrumental in establishing LVMH as a major patron of art in France.[35]

The LVMH Young Fashion Designer was created as an international competition open to students from fine-arts schools. Every year, the winner is awarded a grant to support the creation of the designer's own label and with a year of mentorship.[36][37]

In 2006, Arnault started the building project of the Louis Vuitton Foundation. Dedicated to creation and contemporary art, the building was designed by the architect Frank Gehry.[40] The Foundation's grand opening at the Jardin d'Acclimatation Paris was held on 20 October 2014.[41]

His children Delphine, Antoine, Alexandre and Frédéric all have official roles in brands controlled by Arnault, along with his niece Stephanie Watine Arnault.[48]

In 2013, it was disclosed that Arnault planned to apply for Belgian citizenship and was considering moving to Belgium.[51] In April 2013, Arnault said that he had been misquoted and that he never intended to leave France: "I repeatedly said that I would stay as a resident in France and that I would continue to pay my taxes.... Today, I decided to remove any ambiguity. I withdraw my request of Belgian nationality. Requesting Belgian nationality was to better protect the foundation that I created with the sole purpose of ensuring the continuity and integrity of the LVMH group if I were to disappear."[52] On 10 April 2013, Arnault announced he had decided to abandon his application for Belgian citizenship, saying he did not want the move to be misinterpreted as a measure of tax evasion, at a time when France faced economic and social challenges.[53] Arnault also stated several employees requested to leave France for tax purposes but he declined their requests, explaining "the 75% tax would not raise a lot of revenue but should prove less divisive, as now it was set to be levied on firms rather than people, and only due to stay in place for two years."[54]