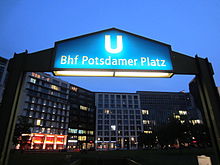 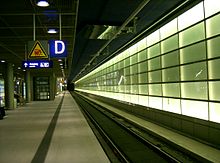 The first station at Potsdamer Platz was the Potsdamer Bahnhof terminus, which was closed on 27 September 1945 due to war damage.

In 1939 the S-Bahn, or Stadtbahn (City Railway), arrived. The idea for a North-South Link rapid transit rail line from Unter den Linden to Yorckstrasse, via Potsdamer Platz and Anhalter Bahnhof, had first been mooted in 1914, but it was not planned in detail until 1928, and then approval had to wait until 1933. Begun in 1934, it was plagued with disasters. Determination to have it finished in time for the Berlin Olympic Games in 1936 meant vital safety measures were ignored: on 20 August 1935, a tunnel collapse just south of the Brandenburg Gate buried 23 workmen of whom only four survived; then on 28 December 1936, a fire near the Potsdamer Platz station destroyed vital equipment. Needless to say, the line was not ready for the Berlin Olympics; in fact it was another three years before it first saw public use. In spite of all the setbacks, it was opened from Unter den Linden to Potsdamer Platz on 15 April 1939, extended to Anhalter Bahnhof on 9 October, and then to Yorckstrasse, to complete the link, on 6 November. The Potsdamer Platz S-Bahn station also contained an underground shopping arcade, the largest in Europe.

Four platforms were provided at the station and all were used although just two were planned to suffice: the other two were intended originally to be utilised by another new line, which was to branch off eastwards and run under the city to Görlitzer Bahnhof. A connection from Anhalter Bahnhof was also to be made. Although construction of some tunnel sections went ahead (and these still exist though inaccessible to the public), the line was never opened.

During the war, many of the sections in the Berlin U-Bahn and S-Bahn were all closed due to enemy action, and the sections through Potsdamer Platz were of no exception.

The S-Bahn North-South Link, less than six years old, became the setting for one of the most contentious episodes of the final Battle for Berlin, in late April and early May 1945. On 2 May, the Tunnel was flooded as a consequence of the decision of the remaining Nazi leaders to blow up the section of the North-South Tunnel beneath the nearby Landwehrkanal as a desperate measure to slow the Soviet advance. Because of this incident, the North-South Link was unable to be used until 1947 (see below).

Shortly after war's end the Ringbahnhof got a reprieve of sorts, temporarily reopening on 6 August 1945 as terminus of the Wannseebahn trains, while the Nord-Süd-Tunnel received massive repairs (millions of gallons of water had to be pumped out for starters). The Ringbahnhof closed for good on 27 July 1946 after some fragmentary train workings had resumed along the North-South Link on 2 June. Full services recommenced on 16 November 1947, although repairs were not complete until May 1948.

The S-Bahn North-South Link saw a more bizarre - though not unique - state of affairs. This line, plus two U-Bahn lines elsewhere in the city, suffered from a quirk of geography in that they briefly passed through East German territory en route from one part of West Berlin to another. This gave rise to the infamous "Geisterbahnhofe" (ghost stations), Potsdamer Platz being the most notorious, those unfortunate ones on the eastern side that were sealed off from the outside world and which trains ran straight through without stopping which was being there from 1961 to 1989. They would generally slow down however, affording passengers the strange sight of dusty, dimly lit platforms patrolled by armed guards, there to prevent any East Berliners from trying to escape to the West by train. At the points where the lines passed directly beneath the actual border, concrete "collars" were constructed within the tunnels with just the minimum clearance for trains, to prevent people clinging to the sides or roof of the coaches.

The U-Bahn, or Untergrundbahn (underground railway), was a major revolution in Berlin's public transport, and the forerunner of similar systems now seen in several German cities. The underground sections alternated with sections elevated above ground on viaducts – hence the alternative name Hochbahn (literally "high railway"). The first line (now part of line U1) ran from Stralauer Tor to Potsdamer Platz. Begun on 10 September 1896 and opened on 18 February 1902, the actual Potsdamer Platz station was rather poorly sited. Though it was reached via an entrance right outside the main-line terminus, people then had to walk about 200 metres (660 ft) along an underground passage beneath the appropriately named Bahnstraße (Railway Street). It was built by a Swedish architect Grenander in 1902, and it was supposed to be named Potsdamer Bahnhof, or Potsdamer Ringbahnhof. But after 5 years the station was relocated just 180m to the southwest at Leipziger Platz.

Later that year, the system was developed into a through line running from Warschauer Brücke to Knie, which actually placed Potsdamer Platz on a branch accessed via a triangle of lines (Gleisdreieck) between Möckernbrücke and Bülowstraße stations near the current Gleisdreieck station. The first Potsdamer Platz U-Bahn station saw use for just over five and a half years, until its inconvenient site, and the desire to reach other parts of the city, enabled it to be superseded by a better sited new station on an extension of the line to Spittelmarkt. The new station opened first, on 29 September 1907, and the rest of the extension to Spittelmarkt on 1 October 1908 (evidence of the original station's site can still be seen in the tunnel, from passing trains). As the new station lay mostly beneath the adjoining Leipziger Platz, this is what the station was initially called, renamed Potsdamer Platz on 29 January 1923.

The station was one of a number designed by the Swedish architect Alfred Frederik Elias Grenander (1863–1931). From a technical point of view, its construction was something of a challenge, as above ground the Hotel Furstenhof was being rebuilt at the same time. The U-Bahn line extension and new station ran right through the hotel's basement, cutting it in half. Contrary to several sources, the hotel did not however enjoy a separate entrance directly from the station. The enormous Wertheim Department Store in nearby Leipziger Straße did enjoy such an entrance, as in later years did the Hotel Excelsior from the Anhalter Bahnhof.

Until 1923 the station was known as Leipziger Platz. From then the name was Potsdamer Platz.[2]

The station was closed from 13 August 1961 to 13 November 1993 when Berlin was separated by Berlin Wall. A border fortification was placed near to Potsdamer Platz station. This border fortification was removed in December 1990. It was imagined that trains on either side would simply run as far as the last stop before the border and then reverse back. This was partly the case with the U-Bahn line through Potsdamer Platz, as the Mohrenstraße in October 1991, operationally became a terminus for trains on the eastern side. On the western side however, the entire section all the way back to Wittenbergplatz was closed completely and at least partially dismantled. Indeed, two of the abandoned stations on this section, Bülowstraße and Nollendorfplatz, were converted into markets. The antiques market at the latter was housed in sixteen old wooden coaches lined up beside the platforms, while another coach even carried passengers back and forth to Bülowstraße where a Turkish bazaar was sited.

This station was intended to be an interchange with the future driverless line U3 and U10, however the plans were scrapped when the U3 is primarily used since December 2004. It was partially converted into the event space for events and exhibitions since 2006.

In the latter years of the Wall's existence, part of the abandoned U-Bahn section, the stretch between Gleisdreieck and Potsdamer Platz, had actually been utilised by another line - the M-Bahn (Magnetic Levitation Railway) which, instead of diving underground as before, once it had crossed over the Landwehrkanal, remained above ground on a lengthy elevated structure supported on steel columns, which curved across the Potsdamer Bahnhof's former site to end at a terminus of its own at Kemper Platz, very near the Philharmonie (Philharmonic Hall, home of the Berlin Philharmonic Orchestra).

As early as the late 1970s the West Berlin government had discussed introducing such a system to the city, particularly a section linking Tegel Airport with the centre. The go-ahead was finally given for the building of a test track at Potsdamer Platz on 2 December 1980, with a ground-breaking ceremony taking place on 16 June 1983, construction starting in earnest in December 1983 and the first test runs occurring in June 1984. This has required a direct link for those people staying in the western part of Potsdamer Platz as there is no rail connection to Gleisdreieck. Five years of intensive testing followed, not without incident. On 18 April 1987 an arson attack at Gleisdreieck destroyed two cars, while a more spectacular mishap occurred on 19 December 1988 when a train with badly adjusted brakes ran through the end wall of the Kemperplatz terminus, much to the amusement of the local press. However, with some spare cars pressed into service the line, just 1.6 km (0.99 mi) in length, was opened to the public on 28 August 1989, although it did not really run from anywhere to anywhere. Nevertheless, it was regarded as an interesting curiosity and was quite heavily used on that basis, although it was to be short-lived. The station in the western part of Potsdamer Platz is called Kemperplatz.

Less than three months later the Wall came down, which afforded the opportunity to restore the U-Bahn and S-Bahn, thus rendering the M-Bahn redundant. It was closed on 18 July 1991, stripping out of the electrical system began on 31 July, followed by dismantling of the track and the elevated steel deck between September 1991 and January 1992 to make way for the U2 to be reinstated. Today there is nothing left to show that it ever existed. Similarly it was decided not to proceed with any M-Bahn plans elsewhere in the city. The possibility of going ahead with the line to Tegel Airport resurfaced periodically, but with the airport itself set to close in 2012 after the massive expansion of Berlin Schönefeld Airport to transform it into the vast new Berlin-Brandenburg International Airport, due for completion in 2011, these plans have now been consigned to history.

The station is served by the following services:

The long-distance station is, strictly speaking, not a station but just a stop, as it lacks the points required to be classified as a station under German law.