Seaweed and two chitons in a tide pool

Benthos is the community of organisms that live on, in, or near the seabed, river, lake, or stream bottom, also known as the benthic zone.[1] This community lives in or near marine or freshwater sedimentary environments, from tidal pools along the foreshore, out to the continental shelf, and then down to the abyssal depths.

Many organisms adapted to deep-water pressure cannot survive in the upperparts of the water column. The pressure difference can be very significant (approximately one atmosphere for each 10 metres of water depth).[2]

Because light is absorbed before it can reach deep ocean-water, the energy source for deep benthic ecosystems is often organic matter from higher up in the water column that drifts down to the depths. This dead and decaying matter sustains the benthic food chain; most organisms in the benthic zone are scavengers or detritivores.

The term benthos, coined by Haeckel in 1891,[3] comes from the Greek noun βένθος "depth of the sea".[1][4] Benthos is used in freshwater biology to refer to organisms at the bottom of freshwater bodies of water, such as lakes, rivers, and streams.[5] There is also a redundant synonym, benthon.[6]

The main food sources for the benthos are algae and organic runoff from land. The depth of water, temperature and salinity, and type of local substrate all affect what benthos is present. In coastal waters and other places where light reaches the bottom, benthic photosynthesizing diatoms can proliferate. Filter feeders, such as sponges and bivalves, dominate hard, sandy bottoms. Deposit feeders, such as polychaetes, populate softer bottoms. Fish, such as dragonets, as well as sea stars, snails, cephalopods, and crustaceans are important predators and scavengers.

Benthic organisms, such as sea stars, oysters, clams, sea cucumbers, brittle stars and sea anemones, play an important role as a food source for fish, such as the California sheephead, and humans.

Meiobenthos comprises tiny benthic organisms that are less than about 1 mm but greater than about 0.1 mm in size. Some examples are nematodes, foraminiferans, tardigrades, gastrotriches and smaller crustaceans such as copepods and ostracodes.

Microbenthos comprises microscopic benthic organisms that are less than about 0.1 mm in size. Some examples are bacteria, diatoms, ciliates, amoeba, flagellates. 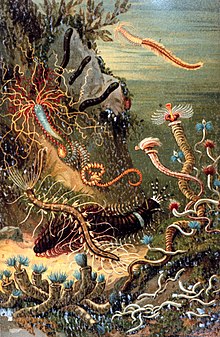 Zoobenthos comprises the animals belonging to the benthos.

Endobenthos lives buried, or burrowing in the sediment, often in the oxygenated top layer, e.g., a sea pen or a sand dollar.

Epibenthos lives on top of the sediments, e.g., like a sea cucumber or a sea snail crawling about. Unlike other epiphytes.

Hyperbenthos lives just above the sediment, e.g., a rock cod.