The Bene Israel ("Sons of Israel", also the "Shanivar Teli" caste (Saturday Oil Presser caste) or "Native Jew Caste")[2] are a community of Jews in India. It has been suggested[3] that it is made up of descendants of one of the disputed Lost Tribes and ancestors who had settled there centuries ago. In the 19th century, after the people were taught about normative (Ashkenazi/Sephardi) Judaism, they tended to migrate from villages in the Konkan area[4] to the nearby cities, primarily Mumbai,[3] but also to Pune, Ahmedabad, India; and Karachi, in today's Pakistan.[5] Many gained positions with the British colonial authority of the period.

In the early part of the twentieth century, many Bene Israel became active in the new film industry, as actresses and actors, producers and directors. After India gained its independence in 1947, and Israel was established in 1948, most Bene Israel emigrated to Israel, Canada and other Commonwealth countries and the United States. 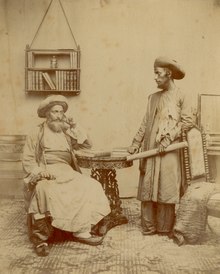 Bene Israel teachers of the Free Church of Scotland's Mission School and the Jewish English School in Bombay, 1856

According to the Bene Israel tradition, they arrived in India sometime in the first or second century when their ancestors were shipwrecked in western India while on a trading voyage to the far east.[6] On the other hand, some historians have thought their ancestors may have belonged to one of the Lost Tribes of Israel,[7][8] but the Bene Israel have never been officially recognized by Jewish authorities as such. After migrating to India the Bene Israel gradually assimilated to the people around them, while keeping some Jewish customs.[9] The medieval Jewish philosopher Maimonides mentioned in a letter that there was a Jewish community living in India: he may have been referring to the Bene Israel.[10]

At a point in history which is uncertain, an Indian Jew from Cochin named David Rahabi discovered the Bene Israel in their villages and recognized their vestigial Jewish customs.[11] Rahabi taught the people about normative Judaism. He trained some young men among them to be the religious preceptors of the community.[12] Known as Kajis, these men held a position that became hereditary, similar to the Cohanim. They became recognized as judges and settlers of disputes within the community.[13]

Bene Israel tradition places Rahabi's arrival at either 1000 or 1400, although some historians have dated his arrival to the 18th century. They suggest that the "David Rahabi" of Bene Israel folklore was a man named David Ezekiel Rahabi, who lived from 1694 to 1772, and resided in Cochin, then the center of the wealthy Malabar Jewish community.[14][15][16] Others suggest that the reference is to David Baruch Rahabi, who arrived in Bombay from Cochin in 1825.[17]

Under British colonial rule, many Bene Israel rose to prominence in India[citation needed]. They were less affected than other Indians by the racially discriminatory policies of the British colonists, considered somewhat outside the masses[citation needed]. They gained higher, better paying posts in the British Army when compared with their non-Jewish neighbours.[9] Some of these enlistees with their families later joined the British in the British Protectorate of Aden.[19] In the 19th century, the Bene Israel did however meet with hostility from the newly anglicized Baghdadi Jews who considered the Bene Israel to be "Indian". They also questioned the Jewishness of the community. In response, the Bene Israel educator and historian, Haeem Samuel Kehimkar, spearheaded the defence of the Jewishness of the Bene Israel in the late 1800s. In his writings, he tried to portray the Bene Israel as a totally foreign community in India. He also divided the community into two endogamous groups, white (gora) and black (kala). He claimed the whites had pure blood and the blacks were the progeny of Indian women and therefore impure.[20][21]

In the early twentieth century, numerous Bene Israel became leaders in the new film industry in India. In addition, men worked as producers and actors: Ezra Mir (alias Edwin Myers) (1903-1993) became the first chief of Films Division of India, and Solomon Moses was head of the Bombay Film Lab Pvt Ltd from the 1940s to 1990s.[22] Ennoch Isaac Satamkar was a film actor and assistant director to Mehboob Khan, a director of Hindi films.[23]

Given their success under the British colonial government, many Bene Israel prepared to leave India at independence in 1947. They believed that nationalism and the emphasis on indigenous religions would mean fewer opportunities for them. Most emigrated to Israel,[24] which was newly established in 1948 as a Jewish homeland.[25][26]

Between 1948 and 1952, some 2,300 Bene Israel immigrated to Israel.[27] In India, the Bene Israel and other Jews lived in urban areas, however in Israel they were settled into development towns.[28] Several rabbis refused to marry Bene Israel to other Jews, on grounds that they were not legitimate Jews under Orthodox law. As a result of sit-down protests and hunger strikes by Orthodox Jews, the Jewish Agency returned 337 individuals of Bene Israel in several groups to India between 1952 and 1954. Most returned to Israel after several years.[29][30]

In 1962, authorities in Israel were accused by articles in the Indian press of racism towards the Bene Israel. [31][32] In the case that caused the controversy, the Chief Rabbi of Israel ruled that before registering a marriage between Indian Jews and Jews not belonging to that community, the registering rabbi should investigate the lineage of the Indian applicant for possible non-Jewish descent, and in case of doubt, require the applicant to perform conversion or immersion.[31][32] The alleged discrimination may actually be related to the fact that some religious authorities believed that the Bene Israel were not fully Jewish because of inter-marriage during their long separation.[33] Between 1962 and 1964, the Bene Israel community staged protests against the religious policy. In 1964 the Israeli Rabbinate ruled that the Bene Israel are "full Jews in every respect".[24][34]

The Report of the High Level Commission on the Indian Diaspora (2012) reviewed life in Israel for the Bene Israel community. It noted that the city of Beersheba in Southern Israel has the largest community of Bene Israel, with a sizable one in Ramla. They have a new kind of transnational family.[35] Generally the Bene Israel have not been politically active and have been of modest means. They have not formed continuing economic connections to India and have limited political status in Israel. The community despite being in Israel for many generations has maintained many of their traditions from India such as Malida and wedding rituals such as mehndi.[36] Jews of Indian origin are generally regarded as Sephardic; they have become well integrated religiously with the Sephardhim community in Israel.[37]

Religiously, the Bene Israel adopted the devotional singing style Kirtan from theie Marathi Hindu neighbors. A popular Kirtan is one based on the Story of Joseph.[38]Their main traditional musical instruments are the Indian Harmonium and the Bulbul tarang.[39]

Migration to other countries