Azure, a bend or, possibly the most famous bend in heraldic history, which was the subject of one of the earliest cases in heraldic law in England, Scrope v. Grosvenor (1389)

In heraldry, a bend is a band or strap running from the upper dexter (the bearer's right side and the viewer's left) corner of the shield to the lower sinister (the bearer's left side, and the viewer's right). Authorities differ as to how much of the field it should cover, ranging from one-fifth (if shown between other charges) up to one-third (if charged alone). The supposed rule that a bend should occupy a maximum of one-third of the field appears to exclude the possibility of three bends being shown together, but contrary examples exist.[citation needed] Outside heraldry, the term "bend (or bar) sinister" is sometimes used to imply illegitimacy, though it is almost never true that a bend sinister has this significance, and a "bar sinister" cannot, by its nature, exist. 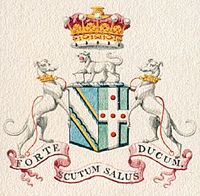 A bend can be modified by most of the lines of partition, such as the bend engrailed in the ancient arms of Fortescue and the bend wavy in the ancient coat of Wallop, Earls of Portsmouth.

The diminutives of the bend, being narrower versions, are as follows, in descending order of width:

Arthur Plantagenet, 1st Viscount Lisle (d.1542) bore the arms of the House of York with a bendlet sinister overall.

The usual bend is occasionally called a bend dexter when it needs to contrast with the bend sinister, which runs in the other direction, like a sash worn diagonally from the left shoulder (Latin sinister means left). The bend sinister and its diminutives such as the baton sinister are rare as an independent motif; they occur more often as marks of distinction. The term "bar sinister" is an erroneous term when used in this context, since the "bar" in heraldry refers to a horizontal line.

The bend sinister, reduced in size to that of a bendlet (narrow) or baton (ending short of the edge of the shield), was one of the commonest brisures (differences) added to the arms of illegitimate offspring of European aristocratic lords.[6] Such royal descent was considered a mark of honour,[7] and in most of Europe, illegitimate children of nobles, despite having few legal rights, were customarily regarded as noble and married within the most aristocratic families.[8]

This was the usual mark used to identify illegitimate descendants of the English royal family dating from fifteenth century, as in the arms of Arthur Plantagenet, 1st Viscount Lisle, illegitimate son of Edward IV of England.[9] The full-sized bend sinister was seldom used in this way, and more recent examples also exist of bends sinister that have no connection with illegitimacy, such as in the arms of the Burne-Jones baronets.[10] These markings were never subject to strict rules,[11] and the customary English use of the bend, bendlet, and baton sinister to denote illegitimacy in this way eventually gave way to the use of different kinds of bordures.[12]

Sir Walter Scott is credited with inventing the phrase bar sinister, which has become a metonymic term for bastardy.[13] Heraldry scholar Arthur Charles Fox-Davies and others state that the phrase derives from a misspelling of barre, the French term for bend.[14] Despite its not being a real heraldic symbol (a bar cannot actually be either dexter or sinister since it is horizontal), bar sinister has become a standard euphemism for illegitimate birth.[15]

A charge bendwise is slanted like a bend. When a charge is placed on a bend, by default it is shown bendwise.

Party per bend, argent and gules

A shield party per bend (or simply per bend) is divided into two parts by a single line which runs in the direction of a bend. Applies not only to the fields of shields but also to charges.

Arms of the first house of Burgundy: Bendy or and azure, a bordure gules

Bendy is a variation of the field consisting (usually) of an even number of parts,[18] most often six; as in the coat of the duchy of Burgundy.

In Spanish heraldry, bends may be engouled, or swallowed, by the heads of dragons or wolves. A famous example of this is in the Royal Bend of Castile.