Belleville is a city in Eastern Ontario, Canada. It is on the eastern end of Lake Ontario, located at the mouth of the Moira River and on the Bay of Quinte. Belleville is between Ottawa and Toronto, along the Quebec City-Windsor Corridor. Its population as of the 2016 census was 50,716 (census agglomeration population 103,472[3]). It is the seat of Hastings County, but politically independent of it, and is the centre of the Bay of Quinte Region. 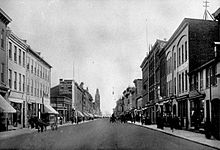 Flowerbed beside Highway 401 near Belleville

Originally the site of an Anishinaabe (Mississaugas) village in the 18th century known as Asukhknosk, the future location of the city was settled by United Empire Loyalists. It was first called Singleton's Creek after an early settler, George Singleton, and then as Meyer's Creek after prominent settler and industrialist John Walden Meyers, one of the founders of Belleville who built a sawmill and grist mill.[5][6] It was renamed Belleville in honour of Lady Annabella Gore in 1816,[5] after a visit to the settlement by Sir Francis Gore and his wife.

Another important family in the growth of Belleville was that of Henry Corby, the founder of H. Corby Distillery, who had arrived in 1832. He promoted the municipality and his son Henry Corby, Jr. (Harry) donated the public library, helped develop the park at Massassaga Point, established the Corby Charitable Fund, helped raise funds to build the first bridge across the Bay of Quinte[7] and donated Corby Park.[8]

In 1836 Belleville became an incorporated village.[9] By 1846, it had a population of 2040. There were several stone buildings, including a jail and court house as well as some of the seven churches. Transportation to other communities was by stagecoach and, in summer, by a steamboat. Two weekly newspapers were being published. The post office received mail daily. Several court and government offices were located here. In addition to tradesmen, there was some small industry, three cloth factories, a paper mill, two grist mills, three tanneries and two breweries. Seventeen taverns were in operation.[10] The oldest surviving residence inside the original boundaries, 67 South Front Street, was built by Alexander Oliphant Petrie in 1814.[11]

Belleville became an important railway junction with the completion of the Grand Trunk Railway in 1856; this plus a booming trade in lumber and successful farming in the area helped increase the commercial and industrial growth. Belleville was incorporated as a town in 1850.[12]

In 1858 the iron bridge over the Moira River at Bridge Street became the first iron bridge in Hastings County. By 1865, the population reached 6,000.[9] Telephone service to 29 subscribers was in place by 1883; electricity became available in 1885 and in 1886, the town began to offer municipal water service. In 1870, Belleville became the site of Ontario's first school for the deaf. Under Dr. Charles B. Coughlin, the school was recognized as making a significant contribution to special education. Originally called the Ontario Institution for the Education of the Deaf and Dumb, the facility was first renamed Ontario School for the Deaf and then, in 1974, the Sir James Whitney School.[13]

Belleville's High Victorian Gothic town hall was built in 1873 to house the public market and administrative offices. The overall appearance is similar to the original even today.[14][15] In 1877, Belleville was legally incorporated as a city.[12] In 1998, the city was amalgamated with the surrounding Township of Thurlow to form an expanded City of Belleville as part of Ontario-wide municipal restructuring. The city also annexed portions of Quinte West to the west.

The Dixie Lee Fried Chicken chain (1964) and the Journey's End Corporation economy limited service hotel chain (1978) were both founded in the city.

Belleville is located at the mouth of the Moira River on the Bay of Quinte in southeastern Ontario between the cities of Quinte West to the west and Napanee to the east. These cities are connected by both Ontario's Highway 2 and the Macdonald-Cartier Freeway (Highway 401); The city is also served by Highway 37, running north–south from Belleville towards Tweed to the east of the Moira River; and Highway 62 (once Highway 14 south of 401), northwards towards Madoc, and southward to Prince Edward County over the Bay Bridge.

Belleville's climate has four distinct seasons. The city's traditional humid continental climate (Dfb)(hot summers, cold winters) is moderated by its location near Lake Ontario. The lake moderates temperature extremes, cooling hot summer days and warming cold days during the fall and winter.[citation needed] Because of this, winter snowfall is somewhat limited due to the increased frequency of precipitation falling as rain during the winter months. In the summer months, severe thunderstorm activity is usually limited because of the non-favourable lake breeze conditions. The city, being located on the north shore of Lake Ontario, is also in an unfavourable location for lake effect snow. One notable exception, however, was in December 2010 when 14 cm of snow occurred in one day as a result of a snow band from Lake Ontario. The summer months do not typically experience exceedingly hot temperatures, however, humidity levels can make daytime highs uncomfortable. Summer rainfall is usually modest and delivered by passing thunderstorms or warm fronts. Remnants of tropical systems do pass through on occasion towards summer's end, resulting in one or two days of consistently wet weather. The winter season is highly variable, with the record setting winter of 2007–08 experiencing near 270 cm of snow. Four years later, the winter of 2011–12 experienced only 60 cm of snow. Winter temperatures are also highly variable, even in one season. Air masses change frequently, and while a few days may see above freezing temperatures at a time in January, the next week may bring cold and snowfall. Autumn is usually mild, with an increase in precipitation starting in late September as conditions for fall storms develop. The highest temperature ever recorded in Belleville was 104 °F (40.0 °C) on 9 July 1936.[16] The coldest temperature ever recorded was −39 °F (−39.4 °C) on 9 February 1934.[16] 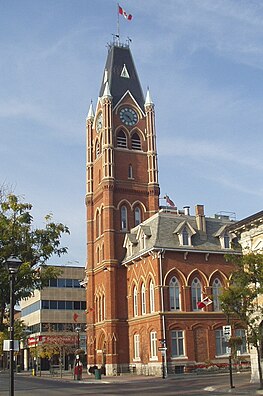 The city has had its own police force since 1834, and constables since 1790.[18] The force has about 116 members headed by a chief of police and a deputy chief. The service is stationed out of one location only. Policing on provincial highways is provided by the Ontario Provincial Police from the Napanee detachment.

Belleville is home to two shopping malls: The Bay View Mall in east-end Belleville and the Quinte Mall along Bell Boulevard (south of Highway 401) in North Belleville. In January 2017 a Shorelines Casino opened on Bell Boulevard.

The Quinte Economic Development Commission is the regional economic development office representing the City of Belleville, the City of Quinte West and the Municipality of Brighton. The Quinte EDC is mandated with the responsibility for regional marketing for its member municipalities as well as supporting existing industries through regional strategies.

The City of Belleville is located within a 15-minute drive of 8 Wing/Canadian Forces Base (CFB) Trenton. 8 Wing CFB Trenton is Canada's largest Canadian Forces Air Base and is available for commercial flights for passenger and cargo uses, by prior arrangement with DND. There is a Customs and Immigration office located on site for international flights. Airport facilities include snow removal, crash response, fire fighting and rescue services, 24-hour-a-day air traffic control tower, fully equipped airfield navigational and visual approach, and one paved runway which is 10,000 feet long and can accommodate 747 and C5A classes.

Belleville is serviced by the 401 highway system, and bus service to and from Toronto Pearson International Airport is provided three times daily each way by Megabus. Deseronto Transit provides public transportation services to destinations including Deseronto, Napanee, and Prince Edward County.[19]

Highway 62/North Front Street
Highway 62 runs from the northern city limit with the Township of Centre Hastings to the southern boundary with the Municipality of Prince Edward County (where the highway crosses the Norris Whitney Bridge over the Bay of Quinte). From Highway 401 south to the Canadian National Railways overpass, 62 follows North Front Street. South of there, as that street splits entering downtown, 62 follows the eastern branch, Pinnacle Street, across the Sagonaska Bridge and through downtown. 62 then turns East at Dundas Street (old Highway 2), and continues to Bay Bridge Drive, where the highway heads south into 'the County'.

Highway 2/Dundas Street
Running across southern Belleville, Dundas Street is a four-lane highway from where it enters Belleville's west end at Wallbridge-Loyalist Road to Point Anne Road, approximately 11 km east. Highway 2 originally crossed the Moira River at the Lower Bridge, co-designated with Bridge Street, but when Dundas Street finally crossed the Moira in the early 1970s, the old route was forgotten, although it is still signed as Highway 2.

The eastern section of Dundas Street is where, as Highway 2, it was rebuilt in the late 1930s as a "dual highway" (four lanes), to the same standards as the concurrent Queen Elizabeth Way. Part of a period of freeway design experimentation in Ontario, it was never upgraded in the same manner as the QEW, as Highway 2 was supplanted by the new 401 as the major transportation corridor along Lake Ontario.[20] It remains today as an example of early freeway design.

Bell Boulevard/Adam Street
Bell in 2010 was extended east to the Moira River, where the Veterans Memorial Bridge connects it to Adam Street, with the combined route connecting Wallbridge-Loyalist Road on the western boundary of Belleville, running through the North-west Industrial Park and over the Moira as it passes through Riverside Park, ultimately ending at University Avenue, in the city's North-East Industrial Park. From Sidney Street east to North Park Street, Bell Boulevard is home to a variety of commercial properties, including Reid's Dairy and the Quinte Mall, as well as a number of restaurants and hotels.

College Street/Airport Parkway
College Street runs from the residential area of West Park Village, across the city to the North-East Industrial Park. Branching off of College and running east to Shannonville Road is Airport Parkway, formerly known as the Byron Street Extension.

Belleville offers a number of options at the elementary, secondary, and post-secondary levels.

The Academy of Learning College is a local college located on the east end of Belleville.

Loyalist College is a local public community college located on the border of Belleville and Quinte West on Wallbridge Loyalist Road.

The following are Belleville area schools managed by the Algonquin and Lakeshore Catholic District School Board.

On September 25, 2016, the Ottawa Senators announced that their AHL affiliate will move from Binghamton, New York, to Belleville for the 2017–18 season. The team is known as the Belleville Senators.[24] They play at the CAA Arena, formally Yardmen Arena, located on 265 Cannifton Road.

The Belleville McFarlands were a men's senior ice hockey team in the Ontario Hockey Association Senior division from 1956 to 1961. The McFarlands were Allan Cup champions in 1958, defeating the Kelowna Packers four games to three, and the World Championship in 1959. The team name was revived by a later team in the Eastern Ontario Senior Hockey League from 2003 to 2006, known as the Belleville Macs

The City of Belleville has three sister city arrangements with communities outside of Canada which include:[25]