Senaat (help·info), French: Sénat, German: Senat) is one of the two chambers of the bicameral Federal Parliament of Belgium, the other being the House of Representatives. It is considered to be the "upper house" of the Federal Parliament.[1] Created in 1831 as a chamber fully equal to the Chamber of Representatives, it has undergone several reforms in the past, most notably in 1993 and 2014. The 2014 elections were the first without a direct election of senators. Instead, the new Senate is composed of members of community and regional parliaments and co-opted members. It is a chamber of the communities and regions and serves as a platform for discussion and reflection about matters between these federated entities. The Senate today plays a minor role in the federal legislative process. However, the Senate, together with the Chamber, has full competence for the Constitution and legislation on the organization and functioning of the Federal State and the federated entities. Since the reform of 2014, it holds about ten plenary sessions a year.

After the Belgian Revolution of 1830, the National Congress decided on the Belgian Constitution and the state structure. Belgium would become a unitary state. A bicameral Parliament was chosen over a unicameral one. The Senate was seen as a more conservative and elite body that served as a counterweight to the more progressive Chamber of representatives. Senators were directly elected, but only those who paid ground taxes were eligible. Only men who paid taxes were allowed to vote. There was also the possibility for the heir to the throne to become senator by right.

In 1893 the principal of universal multiple voting right was introduced for men. This was combined with the principle of compulsory voting and the principle of proportional representation. For the Senate, candidates still needed to pay ground taxes, but the threshold was lowered. Moreover, a new category of provincial senators was introduced.

After World War I, the single vote system - "one man, one vote" - was introduced. This principle of universal suffrage was only applicable to men, women had no right to vote. They however could be a candidate in elections.

1921 saw a new reform for the Senate. The prerequisite of taxes was abolished and 4 categories of senators were created: directly elected senators, provincial senators, co-opted senators and senators by right.

After World War II, women finally received the same rights as men as far as voting was concerned.

The post-World War era saw a series of six Belgian state reforms from 1970 until 2014. In 1993, the competences of the Senate were redefined during the fourth State Reform. In 2014, during the sixth State Reform, the Senate transformed in the assembly it is today, with important reforms concerning composition and competences.

Since the sixth state reform of 2014, the Senate consists of 60 members. 50 are elected by the parliaments of the federated entities, and 10 are co-opted members.

Senators of the federated entities

Starting with the elections of 25 May 2014, 50 senators are appointed by and from the parliaments of the federated entities: 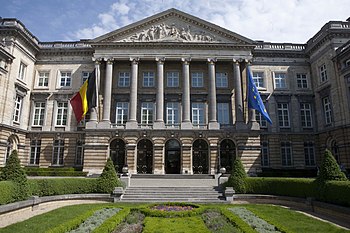 The Palace of the Nation in Brussels, home to both Chambers of the Federal Parliament of Belgium

In 1893, the co-opted members were included in the Constitution as a new category of senators. It was intended to allow the senators to elect a number of experts or members of representative organizations to join them to enhance the quality of debate and legislation; however, political parties sometimes use it as a means of rewarding loyal members that were not elected.

Prior to the Belgian federal election of May 21, 1995, there were 184 senators, the largest part of which were directly elected, some appointed by the Provincial Councils and others co-opted.[2]

The fourth state reform, which took place in 1993, revised the Belgian Constitution, reduced the number of senators to 71.[3][4] The change took effect following the May 21, 1995 federal election.

Before the sixth state reform, the children of the King, older than 18, or if there were none, the Belgian descendants of the main branch of the Royal house, were entitled to be senators by right by taking the oath of office. Senators by right over the age of 21 were in theory entitled to vote, but in practice they did not cast their vote. They were not taken into account for the required quorum for voting.

Article 69 of the Belgian Constitution sets forth four qualifications for senators: each senator must be at least 18 years old, must possess the Belgian nationality, must have the full enjoyment of civil and political rights, and must be resident in Belgium. Originally, the minimum age to be elected senator was 40; this was reduced to 21 in 1993 and eventually to 18 in 2014. A senator can only enter into office after having taken the constitutional oath, in either of the three official languages in Belgium: Dutch, French or German. They may also choose to take the oath in more than one language. The oath is as follows: "I swear to observe the Constitution". (Dutch: Ik zweer de Grondwet na te leven, French: Je jure d'observer la Constitution, German: Ich schwöre, die Verfassung zu befolgen)

Another important incompatibility is based on the separation of powers. A senator who is appointed as a minister ceases to sit in the Senate and is replaced for as long as he is a minister. However, if he resigns as a minister, he may return to the Senate, in accordance with Article 50 of the Belgian Constitution. A senator cannot also be a civil servant or a member of the judiciary at the same time. However, a civil servant who is elected to the Senate is entitled to political leave and doesn't have to resign as a civil servant. It is also not possible to be a member of the Federal Parliament and a Member of the European Parliament at the same time.[5]

Seat of the presiding officers of the Senate

The current Speaker of the Belgian Senate is Sabine Laruelle of the Mouvement Réformateur (MR).

The Senate mainly has the following tasks:

Legislation: The Senate, together with the Chamber, has full competence for the Constitution and legislation on the organization and functioning of the Federal State and the federated entities. Depending on the type of law, different procedures are possible that require, among others, special majorities (i.e. a two-thirds majority in the Senate, combined with a majority in each language group).

Subsidiarity: Following the EU Treaties, the Senate has the right as chamber of the federal parliament to ensure that the European Union does not take an initiative on an issue that is better dealt with at another level. This is the so-called early warning mechanism concerning subsidiarity.

The Senate had three standing committees:

The Senate also has an Equal Opportunities Advisory Committee that focuses on equality between women and men.

The Senate and the Chamber of representatives have established three joint committees:

Given its limited legislative power, since the reform of 2014, the Senate holds about ten plenary sessions a year. The standing committees of the Senate, however, determine their own meeting schedule.

This is the composition of the Senate following the federal and regional elections of May 26, 2019. 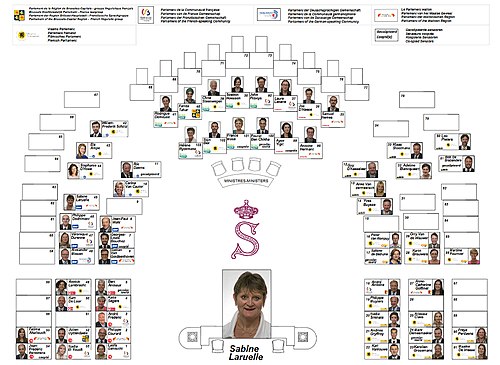 * Including the senator of the German-speaking community