Beira-Bulawayo railway, also called Machipanda railway,[1] Beira-Harare-Bulawayo railway and Beira railway, is a railway that connects the city of Beira, Mozambique, to the city from Bulawayo, in Zimbabwe. It is 850 km long, in a 1067 mm gauge.[2]

On the Mozambican stretch, between Beira and Machipanda, the managing company is Mozambique Ports and Railways (CFM);[1] on the Zimbabwean stretch, between the cities of Mutare, Harare and Bulawayo, the administration is done by the company National Railways of Zimbabwe (NRZ).[3]

Its main maritime logistics facility is the port of Beira.[1]

Originally, the Beira–Bulawayo railway was to establish a rail connection between Harare and Beira, according to the understanding celebrated in the 1870s between Portuguese West Africa and the Company rule in Rhodesia.[4]

However, due to financial difficulties with the Portuguese partners, the construction of the first stretch of the Beira–Bulawayo railway started only in 1892; the infrastructure, in narrow gauge of 610 mm, connected, already on February 4, 1898, Beira to the border city Mutare, in Zimbabwe, covering 357 kilometers.[5]

Still in the 1890s, work began on extending the original project, starting from Bulawayo, in Zimbabwe, to build a 1,067 mm railway to the north, up to Harare, which was definitively completed in 1899. After the conversion of Mutare (1067 mm) and Machipanda (610 mm), the line finally connected Bulawayo, Gweru, Harare, Mutare, Manica, Chimoio, Dondo and Beira.[6]

The 610 mm narrow gauge locomotives were subsequently purchased from the South African Railways and are designated "SAR class NG6".[7]

Subsequently the stretch between Machipanda and Beira was adapted to the Zimbabwean standard, being fully converted to 1,067 mm, eliminating the need for the conversion of Mutare-Machipanda.[2] 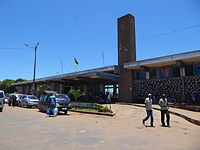 In Dondo, the Beira–Bulawayo line connects with the Sena railway.[8]

In Somabhula, the Beira–Bulawayo line connects with the Limpopo railway.[8]

In Umzingwane, the Beira–Bulawayo line connects with the Beitbridge-Bulawayo railway.[8]

In Bulawayo, the Beira–Bulawayo line connects with the Cape to Cairo Railway.