Copper Aluminium Ore
Sedimentary rock rich in aluminium
This article is about the ore. For the town in Arkansas, see Bauxite, Arkansas. 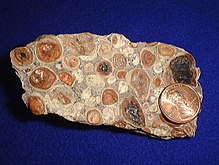 Bauxite with US penny for comparison 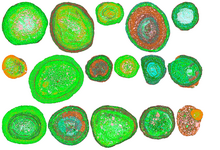 Bauxite is a sedimentary rock with a relatively high aluminium content. It is the world's main source of aluminium and gallium. Bauxite consists mostly of the aluminium minerals gibbsite (Al(OH)3), boehmite (γ-AlO(OH)) and diaspore (α-AlO(OH)), mixed with the two iron oxides goethite (FeO(OH)) and haematite (Fe2O3), the aluminium clay mineral kaolinite (Al2Si2O5(OH)) and small amounts of anatase (TiO2) and ilmenite (FeTiO3 or FeO.TiO2).[1]

In 1821 the French geologist Pierre Berthier discovered bauxite near the village of Les Baux in Provence, southern France.[2][non-primary source needed]

Bauxite with core of unweathered rock

Numerous classification schemes have been proposed for bauxite but, as of 1982[update], there was no consensus.[3]

In the case of Jamaica, recent analysis of the soils showed elevated levels of cadmium, suggesting that the bauxite originates from recent Miocene ash deposits from episodes of significant volcanism in Central America.

One of the world's largest bauxite mines in Weipa, Australia

Australia is the largest producer of bauxite, followed by China.[4] Increased aluminium recycling, which has the advantage of lowering the cost in electric power in producing aluminium, will considerably extend the world's bauxite reserves.

In November 2010, Nguyen Tan Dung, the prime minister of Vietnam, announced that Vietnam's bauxite reserves might total 11,000 Mt (11 trillion kg); this would be the largest in the world.[6]

Bauxite being loaded at Cabo Rojo, Dominican Republic, to be shipped elsewhere for processing; 2007

Play media
Bauxite being digested by washing with a hot solution of sodium hydroxide at 175 °C (347 °F) under pressure at National Aluminium Company, Nalconagar, India.

Bauxite is usually strip mined because it is almost always found near the surface of the terrain, with little or no overburden. As of 2010[update], approximately 70% to 80% of the world's dry bauxite production is processed first into alumina and then into aluminium by electrolysis.[7] Bauxite rocks are typically classified according to their intended commercial application: metallurgical, abrasive, cement, chemical, and refractory.

Usually, bauxite ore is heated in a pressure vessel along with a sodium hydroxide solution at a temperature of 150 to 200 °C (300 to 390 °F). At these temperatures, the aluminium is dissolved as sodium aluminate (the Bayer process). The aluminium compounds in the bauxite may be present as gibbsite(Al(OH)3), boehmite(AlOOH) or diaspore(AlOOH); the different forms of the aluminium component will dictate the extraction conditions. The undissolved waste, bauxite tailings, after the aluminium compounds are extracted contains iron oxides, silica, calcia, titania and some un-reacted alumina. After separation of the residue by filtering, pure gibbsite is precipitated when the liquid is cooled, and then seeded with fine-grained aluminium hydroxide. The gibbsite is usually converted into aluminium oxide, Al2O3, by heating in rotary kilns or fluid flash calciners to a temperature in excess of 1,000 °C (1,830 °F). This aluminium oxide is dissolved at a temperature of about 960 °C (1,760 °F) in molten cryolite. Next, this molten substance can yield metallic aluminium by passing an electric current through it in the process of electrolysis, which is called the Hall–Héroult process, named after its American and French discoverers.

Prior to the invention of this process, and prior to the Deville process, aluminium ore was refined by heating ore along with elemental sodium or potassium in a vacuum. The method was complicated and consumed materials that were themselves expensive at that time. This made early elemental aluminium more expensive than gold.[8]

Bauxite is the main source of the rare metal gallium.[9]

During the processing of bauxite to alumina in the Bayer process, gallium accumulates in the sodium hydroxide liquor. From this it can be extracted by a variety of methods. The most recent is the use of ion-exchange resin.[10] Achievable extraction efficiencies critically depend on the original concentration in the feed bauxite. At a typical feed concentration of 50 ppm, about 15 percent of the contained gallium is extractable.[10] The remainder reports to the red mud and aluminium hydroxide streams.[11]