The Battle of Tuyutí was a Paraguayan offensive in the Paraguayan War targeting the Triple Alliance encampment of Tuyutí. It is considered to be the bloodiest battle ever in South America.[1]:94 The result of the battle was an Allied victory, which added the to Paraguayan troubles that had begun bu failed offensives and the loss of its fleet in the Battle of Riachuelo. Another attack on the Allied camp was made in November 1867.

Map of the Battle of Tuyutí.

In this phase of the war the Allies' strategic objective was to take the Fortress of Humaitá, the gateway to Paraguay. They intended to launch an amphibious operation, which required their land forces to take the fortress from the rear. After crossing the Paraná River from Argentina and landing in Paraguay, they had a long march across country studded with lagoons and carrizal (reed beds growing in marsh). The fortress was defended by the extensive earthworks of its Polígono or Quadrilateral design. It was in this context that the Battle of Tuyutí occurred.

In early May 1866, the Paraguayan attack at the Estero Bellaco marsh failed. The allies camped for over two weeks before resuming their advance on 20 May 1866. Paraguayan leader Francisco Solano López moved his headquarters to Paso Pucu, where he dug trenches in the passes from Gomez to Rojas.[1]:53 After learning that the Allied army were planning to attack on the 25th, Lopez ordered a surprise attack on Tuyutí, "a swampy, scrub-brush savannah",[3][page needed] for the 24th. 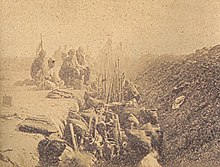 Trench with Uruguayan soldiers from the 24 April Battalion at Tuyutí, taken a month after the battle. Albumen print, 1866.

The attack began in the center, where the Uruguayans were forced back along with some Brazilian Volunteer battalions. On the left of the Allied encampment, Captain Emilio Mallet had ordered the construction of a large moat in front of his artillery pieces. When the Paraguayan onslaught reached it, they were in grapeshot range and unable to cross the obstacle. The Paraguayans tried to circle the artillery, avoiding the incoming fire, but encountered Antonio Sampaio's 3rd Infantry Division. This unit fought desperately in the muddy terrain though their commander died in the process. At this point, Osório ordered his reserves to attack and repelled the Paraguayan center.

On the allied left, the Paraguayans forced back the few Brazilian units, almost reaching the Allied camp. Osório reinforced the Brazilian lines with various units, finally committing the 2nd Cavalry Division, commanded by General Mena Barreto. The Paraguayans continued to attack until they were encircled and annihilated. In the Argentine sector, the Paraguayan cavalry under Gen. Resquín routed the Argentine cavalry under Gens. Caceres and Hornos.[1]:54

Soon the battle turned into "a series of charges and countercharges, a Latin American version of Waterloo".[3][page needed] The Paraguayan columns continued to attack, but could not overcome the allied firepower.[1]:54 In the words of Colonel Thompson of the Paraguayan army (a veteran of the battle), "At 4 p.m. the firing was over, the Paraguayans being completely defeated, and their army destroyed. The Allies had suffered severely also, but they still had an army left. The Paraguayans left 6,000 dead on the field; the Allies only took some 350 prisoners, all wounded. This was because the Paraguayans would never surrender but, when wounded, fought on till they were killed. 7,000 wounded were taken into the Paraguayan hospitals from this battle, those with slight wounds not going into hospital at all. . . . The Allies lost above 8,000 killed and wounded."[5]

As result of the battle, each side's losses were as follows:

Tuyutí was the last major Paraguayan attack. Ultimately, it was a devastating Paraguayan defeat. "The 10,000 men who had not been killed or [seriously] wounded were completely scattered and disorganised, and it was some days before they were again collected", wrote Thompson. "The Allies buried some of their own dead, but they heaped up the Paraguayan corpses in alternate layers with wood, in piles of from 50 to 100, and burnt them. They complained that the Paraguayans were so lean they that they would not burn".[11]

The largest battle ever fought in South America was over. Lopéz's flanking maneuver had failed, but it had come very close to succeeding. In fact, the Allies were unable to pursue the enemy, since they had few horses remaining. They needed to regain strength and rebuild.[1]:57[12]

The Allied forces stayed in their camp until September,[1]:54 but disease struck the camp, claiming some 10,000 victims.[1]:57 Even after September, advances were little and the allied lines settled down to await further orders. These months of static warfare were filled with small-scale skirmishes and sporadic fire, being known in the Allied forces as the "Tuyutí Black Lines[13]".