The Battle of Cerro Corá was fought on 1 March 1870 on a hill-surrounded valley of the same name, in the north-east of Paraguay. This was the last battle in the Paraguayan War.

In Feb. 1870, an Allied column under the command of Col. Bento Martins de Menezes, learned that López was in the vicinity of Cerro Corá, which relayed the information to Gen. José Antônio Correia da Câmara on 18 Feb. Gen. Bernardino Caballero was on a foraging expedition with 40 men when, on 1 March, the Allied vanguard under the command of Lt. Col. Francisco Antonio Martins attacked the Paraguayan camp at 1900 along the Aquidaban River.[1]:105–107

Present with President Francisco Solano López's personal guard were a group of women, led by his mistress Eliza Lynch. This group was composed of the soldier's wives, daughters, and others, who supported the soldiers called "Las Residentas". 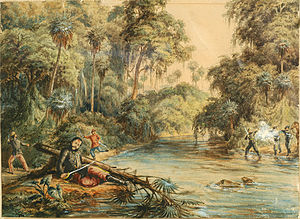 Vice President Francisco Sánchez and Secretary of State Luis Caminos were killed trying to flee. López was surrounded by six cavalrymen, and after refusing to surrender by firing his revolver, Corporal José Francisco Lacerda (known as "Chico Diabo", i.e., "Frank, the Devil") thrust his lance in López's abdomen, mortally wounding him. Assisted by Capt. Francisco Argüello, he evaded the Brazilians and reached the Aquidabán-Niquil stream, but was unable to climb the steep bank because of his wound. Left alone, he was found by the Brazilians, but refused to surrender again, when João Soares shot him in the back.[1]:107 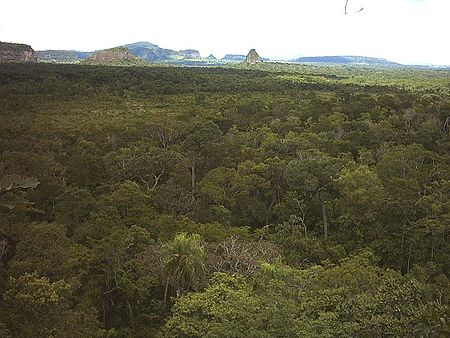 Landscape of Cerro Corá (Amambay, Paraguay), as seen from the top of Cerro Muralla.

After the Brazilian forces killed López, they headed towards the civilians in order to capture them. López and Eliza Lynch's eldest son Juan Francisco, who had been promoted to Colonel during the war and was 15 years old, was with her. The Brazilian officers told him to surrender, and upon replying "Un coronel paraguayo nunca se rinde" (A Paraguayan colonel never surrenders)[2] he was shot and killed. Whereupon jumping and covering her son's body, Lynch exclaimed "¿Ésta es la civilización que han prometido?" (Is this the civilization you have promised?)[3] (making a reference to the allies' claim that they intended to free Paraguay from a tyrant and deliver freedom and civilization to the nation). She then buried both López and her son with her bare hands before being taken as prisoner.[3]

Cerro Cora is a 1978 Paraguayan film set on the last days of the Paraguayan War.