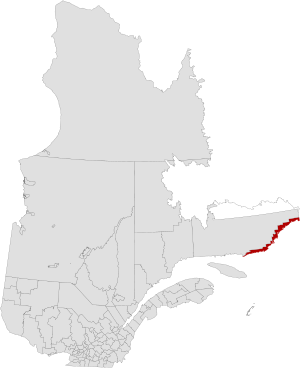 Basse-Côte-Nord Territory (French: Territoire de la Basse-Côte-Nord, meaning "lower north shore") was a territory equivalent to a regional county municipality (TE) in eastern Quebec, Canada. The territory, whose geographical code was 982, was formed in 2002 when it separated from the Minganie Regional County Municipality and was superseded by Le Golfe-du-Saint-Laurent Regional County Municipality that was formed in July 2010.[1]

Basse-Côte-Nord had a land area of 5,803.26 square kilometres (2,240.65 sq mi) and a 2006 census population of 5,505 inhabitants. It included all the communities along the Gulf of Saint Lawrence between the Natashquan River and the Newfoundland and Labrador border, but it had no regional administration.

Basse-Côte-Nord consisted of the following subdivisions, with their codes in parentheses: