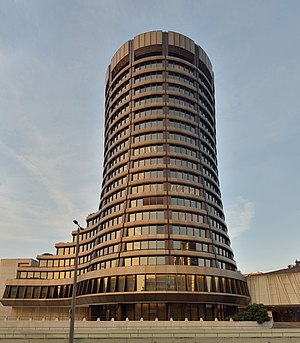 The Basel Committee on Banking Supervision (BCBS)[1] is a committee of banking supervisory authorities that was established by the central bank governors of the Group of Ten countries in 1974.[2] The committee expanded its membership in 2009 and then again in 2014. In 2019, the BCBS has 45 members from 28 Jurisdictions, consisting of Central Banks and authorities with responsibility of banking regulation.[3] It provides a forum for regular cooperation on banking supervisory matters. Its objective is to enhance understanding of key supervisory issues and improve the quality of banking supervision worldwide. The Committee frames guidelines and standards in different areas – some of the better known among them are the international standards on capital adequacy, the Core Principles for Effective Banking Supervision and the Concordat on cross-border banking supervision.[4] The Committee's Secretariat is located at the Bank for International Settlements (BIS) in Basel, Switzerland. The Bank for International Settlements (BIS) hosts and supports a number of international institutions engaged in standard setting and financial stability, one of which is BCBS. Yet like the other committees, BCBS has its own governance arrangements, reporting lines and agendas, guided by the central bank governors of the Group of Ten (G10) countries.[5]

Globalization in banking and financial markets was not accompanied by global regulation. National regulators remained the most important actors in banking practices. They had a capacity problem and an information problem.[6] Therefore, the purpose of the BCBS is to encourage convergence toward common approaches and standards. The Committee is not a classical multilateral organization, in part because it has no founding treaty. BCBS does not issue binding regulation; rather, it functions as an informal forum in which policy solutions and standards are developed.[7]

The Basel Committee formulates broad supervisory standards and guidelines and recommends statements of best practice in banking supervision (see bank regulation or "Basel III Accord", for example) in the expectation that member authorities and other nations' authorities will take steps to implement them through their own national systems.[citation needed]

The Basel committee along with its sister organizations, the International Organization of Securities Commissions and International Association of Insurance Supervisors together make up the Joint Forum of international financial regulators.[citation needed] However, the Committee is not autonomous. Although it has latitude, its work is reported to the central bank Governors of the G10. It cannot communicate conclusions, nor make proposals, to bodies outside the Bank for International Settlements without the general agreement and support of these Governors.[8]

Since 2019 the Chairman of the Committee is Pablo Hernández de Cos, Governor of the Bank of Spain.[9] Carolyn Rogers is the current Secretary General of the Basel Committee.[10]

The Committee is sub-divided into groups, each of which have specific task forces to work on specific issues:

The Committee agrees on standards for bank capital, liquidity and funding. Those standards are non-binding high-level principles. Members are expected but not obliged to undertake effort to implement them e.g. through domestic regulation.