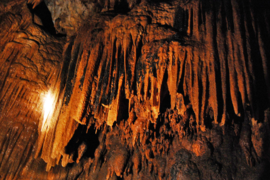 Barton Creek Cave is a natural cave in Belize, known as both an archaeological site and as a tourist destination. It is located in the Barton Creek area near San Ignacio in the Cayo District.

Barton Creek Cave is a primarily single-passage resurging stream cave. By 2002 a cave survey had been completed by the Western Belize Regional Cave Project, recording a total of 6,400 m (21,000 ft) of passages; dye traces at sinking streams above the cave indicated that there could be a further 6 km (3.7 mi) of cave passages beyond the terminal sumps. By 2005 the Xibalba Mapping and Exploration Team had extended the survey to 8 km (5.0 mi).

Extensive looting of artifacts occurred soon after the cave was first reported, but it remains an important site for archaeologists. Evidence of cave use by the Maya exists on ten ledges within the first kilometer of cave passage. Pottery shards indicate use between the Early Classic (200 to 600 CE) to the Late Classic (600 to 900 CE) periods. The remains of at least 28 humans have been found within the cave.