Barry Charles Diller (born February 2, 1942) is an American businessman. He is Chairman and Senior Executive of IAC/InterActiveCorp and Expedia Group and founded the Fox Broadcasting Company and USA Broadcasting. Diller was inducted into the Television Hall of Fame in 1994.[2][3]

Diller was born into a Jewish household in San Francisco, California, and is the son of Reva (née Addison) and Michael Diller.[4][5]

Diller began his career through a family connection[6] in the mailroom of the William Morris Agency after dropping out of UCLA after three weeks. His proximity to the company's file room meant that he could spend free time reading through the archives and learning the entire history of the entertainment industry.[7] He was hired as an assistant by Elton Rule, then west coast head of ABC, who was promoted to network President at the same time Diller went to work for him in 1964, taking him on to New York City. Diller was soon placed in charge of negotiating broadcast rights to feature films. He was promoted to Vice President of Development in 1965. In this position, Diller created the ABC Movie of the Week, pioneering the concept of the made-for-television movie through a regular series of 90-minute films produced exclusively for television.[8]

From October 1984 to April 1992, Diller held the positions of Chairman and Chief Executive Officer of 20th Century Fox, where he launched the Fox network and greenlighted megahit shows such as Married... with Children and The Simpsons.[10]

Diller quit 20th Century Fox in 1992 and purchased a $25 million stake in QVC teleshopping network. He then launched a bid to purchase Paramount Communications, but lost it to Viacom. Diller resigned from QVC in 1995.[11]

In 1997, Diller acquired the assets of Silver King Broadcasting, the collective group of over-the-air TV stations owned by then Bud Paxson's Home Shopping Network as well as the Home Shopping Network itself. Along with this acquisition, Diller also purchased the rights to the USA Network from the Bronfman family. Due to Home Shopping getting more notoriety on the cable networks from his former dealings with the QVC Network, Diller sought to repurpose the broadcast stations into independent, locally run stations as part of a station group dubbed USA Broadcasting of which the flagship station was WAMI-TV in Miami Beach, Florida.[12]

The purpose of the network was to have the flagship, WAMI, produce sports and news programming while testing locally produced general-interest programming for the other stations in the group. Due to the high costs of producing and acquiring talent for shows outside the typical areas of New York City and Los Angeles, plus the significantly low ratings such shows received in Miami Beach, the remaining shows were moved to Los Angeles to regain traction, but never did. Diller eventually sold the TV assets to Univision after rejecting a bid from The Walt Disney Company. The USA Network and its assets were later sold off to Vivendi. Diller retained the assets of the Home Shopping Network and the subsequent Internet assets he acquired later to bolster the HSN Online stable that later became IAC/InterActiveCorp.[citation needed] 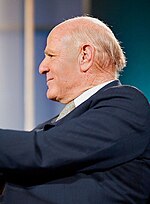 The new headquarters for the IAC/InterActiveCorp, the IAC Building was designed by Frank Gehry and opened in 2007 at 18th Street and the West Side Highway in Manhattan's Chelsea neighborhood. The western half of the block is dedicated to the building, which stands several stories taller than the massive Chelsea Piers sporting complex just across the West Side Highway. The extra floors guarantee a panoramic Hudson River view from Diller's sixth-floor office.[citation needed]

In 2003, on the PBS program NOW with Bill Moyers, Diller voiced a strong warning against media consolidation. In the interview he referred to media ownership by a few big corporations as an oligarchy, saying the concentration strangles new ideas.[16]

In an opinion article in The New York Times of November 7, 2006, Nicholas D. Kristof awarded him his annual Michael Eisner Award,[19] consisting of a five-dollar shower curtain, for corporate rapacity and laziness.[20] In October 2019, Diller had a $4.2 billion fortune in technology companies, after investing early on in companies such as Match.com and Vimeo.[21]

Since 2013, Diller has co-produced more than ten Broadway shows in partnership with Scott Rudin, including To Kill A Mockingbird, West Side Story, Carousel, The Humans, Three Tall Woman, Gary: A Sequel to Titus Andronicus, and A Doll's House, Part 2.[22] IAC Films has also backed numerous films produced by Rudin, including Uncut Gems, Lady Bird, Eighth Grade, The Meyerowitz Stories, and Ex Machina.[23]

In early 2020, Diller took over Expedia's day-to-day operations alongside the Vice Chairman Peter Kern, after the company's CFO stepped down in December 2019.[24] In the midst of the COVID-19 pandemic, Expedia's shares plummeted along with those of other travel companies. Diller announced that Expedia is generating no revenue and would have to cut costs. [25]

Diller is responsible for what the media dubs "The Killer Dillers" – people whom Diller mentored and who later became big-time media executives in their own right. Examples include Michael Eisner (who was President of Paramount Pictures while Diller was its Chairman & CEO, and went on to become Chairman & CEO of The Walt Disney Company), Dara Khosrowshahi (CEO of Uber), Dawn Steel (future head of Columbia Pictures and one of the first women to run a major movie studio, who worked under Diller at Paramount), Jeffrey Katzenberg (head of DreamWorks Animation, principal of DreamWorks SKG, former head of Walt Disney Studios, and a head of production of Paramount under Diller), Garth Ancier, President of BBC America, and Don Simpson, who was President of Production at Paramount under Diller and Eisner and later went on to run a production company based on the Disney lot with Jerry Bruckheimer.[26]

Diller worked with Stephen Chao at Fox Television Network, whom he later hired as President of Programming and Marketing at USA Network. Julius Genachowski, chairman of the Federal Communications Commission, served as Diller's General Counsel during their tenure at USA Broadcasting, and again as Chief of Business Operations and a member of Barry Diller's Office of the Chairman at IAC/InterActiveCorp.[citation needed] 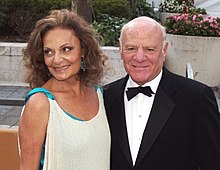 In 2001, Diller married fashion designer Diane von Fürstenberg, mother of Prince Alexander von Fürstenberg and Princess Tatiana von Fürstenberg. He is a member of the Democratic Party and supporter of related political causes.[27] As of June 2020, Diller's estimated net worth was $4.2 billion.[1]

Diller is a critic of President Donald Trump.[28]

Diller's sexual orientation has been discussed in the media. In James B. Stewart's 2005 book DisneyWar, Diller's friend Michael Eisner refers to him as "a homosexual."[29] In 2001, New York Magazine's Maer Roshan wrote:

The recent wedding of Barry Diller and Diane Von Furstenberg epitomizes the media’s convoluted approach to covering gay celebrities. I would not presume to speculate on their relationship, which is said to be a warm and genuine one. But it’s also true that Diller did not live as a monk before his marriage at the age of 59 – in fact, while Diller is often referred to as bisexual, he has lived most of his adult life as a more or less openly gay man. He has had both short-term boyfriends and long-term relationships (including one with a former editor-in-chief of The Advocate); he appears frequently at gay parties and gay benefits. His sexual orientation has even been referred to in print with regularity. Still, because Diller had never actually sent out a press release acknowledging he was gay, journalists faced with the news of his wedding were in a quandary: All across Manhattan, reporters offered various explanations – financial and otherwise – for his apparent midlife transformation. But none, of course, made it into print.[30]

In 2011, the Diller-von Furstenberg Family Foundation announced a donation of $20 million to support the completion of the High Line park project in Manhattan.[31] In 2012, Diller donated $30 million to the Hollywood Fund, which provides health and social care to retired individuals from the show-business world.[32]

In 2015, Diller and his wife committed to donate $113 million toward a floating public park and performance space on a pier in the Hudson River, New York. It is stated to be the largest donation to a public park in New York's history, with completion estimated around 2019.[33][34]