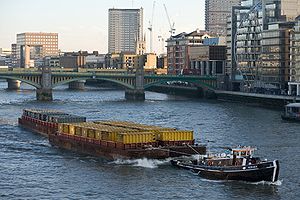 Barges towed by a tugboat on the River Thames in London, England, UK

A barge is a shoal-draft flat-bottomed boat,[1][2] built mainly for river and canal transport of bulk goods. Originally barges were towed by draft horses on an adjacent towpath. Today, barges may be self-propelled, usually with a slow-revving diesel engine and a large-diameter fixed-pitch propeller. Otherwise, "dumb barges" must be towed by tugs, or pushed by pusher boats. Compared to a towed barge, a pusher system has improved handling and is more efficient, as the pushing tug becomes "part of the unit" and it contributes to the momentum of the whole.

In Great Britain, during the Industrial Revolution, a substantial network of narrow canals was developed from 1750 onwards; but from 1825 competition from the railways eventually took over from canal traffic due to the higher speed, falling costs and route flexibility of rail transport. Barges carrying bulk and heavy cargoes continue to be viable. Originally, British canals had locks only seven feet (2.1 m) wide, so narrowboats could be no more than 6'10" wide if they were to be able to navigate the system. It was soon realised that narrow locks were too limiting, and later locks were doubled in width to fourteen feet (4.3 m). Accordingly, on the British canal system the term 'barge' is used to describe a "Thames [sailing barge], Duch [barge], or other styles of barge" (the people who move barges are often known as lightermen),[3] and does not include Narrowboats and Widebeams (see also canal craft).[4]

In the United States, deckhands perform the labor and are supervised by a leadman or the mate. The captain and pilot steer the towboat, which pushes one or more barges held together with rigging, collectively called 'the tow'. The crew live aboard the towboat as it travels along the inland river system or the intracoastal waterways. These towboats travel between ports and are also called line-haul boats.[5]

Poles are used on barges to fend off the barge as it nears other vessels or a wharf. These are often called 'pike poles'. (The long pole used to maneuver or propel a barge has given rise to the saying "I wouldn't touch that with a barge pole".)[6]

"Barge" is attested from 1300, from Old French barge, from Vulgar Latin barga. The word originally could refer to any small boat; the modern meaning arose around 1480. Bark "small ship" is attested from 1420, from Old French barque, from Vulgar Latin barca (400 AD). The more precise meaning "three-masted ship" arose in the 17th century, and often takes the French spelling for disambiguation. Both are probably derived from the Latin barica, from Greek baris "Egyptian boat", from Coptic bari "small boat", hieroglyphic Egyptian

and similar ba-y-r for "basket-shaped boat".[7] By extension, the term "embark" literally means to board the kind of boat called a "barque".

The long pole used to maneuver or propel a barge have given rise to the saying "I wouldn't touch that [subject/thing] with a barge pole."[8]

Towboat pushing a barge on the Chicago River

As an example, on June 26, 2006, a 565-short-ton (513 t) catalytic cracking unit reactor was shipped by barge from the Tulsa Port of Catoosa in Oklahoma to a refinery in Pascagoula, Mississippi. Extremely large objects are normally shipped in sections and assembled onsite, but shipping an assembled unit reduced costs and avoided reliance on construction labor at the delivery site (which in this case was still recovering from Hurricane Katrina). Of the reactor's 700-mile (1,100 km) journey, only about 40 miles (64 km) were traveled overland, from the final port to the refinery.

Self-propelled barges may be used as such when traveling downstream or upstream in placid waters; they are operated as an unpowered barge, with the assistance of a tugboat, when traveling upstream in faster waters. Canal barges are usually made for the particular canal in which they will operate.

Many barges, primarily Dutch barges, which were originally designed for carrying cargo along the canals of Europe, are no longer large enough to compete in this industry with larger newer vessels. Many of these barges have been renovated and are now used as luxury hotel barges carrying holidaymakers along the same canals on which they once carried grain or coal.

Barges in the United States

Multiple barges pushed around a tight bend on the Cumberland River

In times before industrial development, railways, and highways: barges were the predominant and most efficient means of inland transportation in many regions. This holds true today, for many areas of the world.

In such pre-industrialized, or poorly developed infrastructure regions, many barges are purpose-designed to be powered on waterways by long slender poles – thereby becoming known on American waterways as poleboats as the extensive west of North America was settled using the vast tributary river systems of the Mississippi drainage basin. Poleboats use muscle power of "walkers" along the sides of the craft pushing a pole against the streambed, canal or lake bottom to move the vessel where desired. In settling the American west it was generally faster to navigate downriver from Brownsville, Pennsylvania, to the Ohio River confluence with the Mississippi and then pole upriver against the current to St. Louis than to travel overland on the rare primitive dirt roads for many decades after the American Revolution.

Once the New York Central and Pennsylvania Railroads reached Chicago, that time dynamic changed, and American poleboats became less common, relegated to smaller rivers and more remote streams. On the Mississippi riverine system today, including that of other sheltered waterways, industrial barge trafficking in bulk raw materials such as coal, coke, timber, iron ore and other minerals is extremely common; in the developed world using huge cargo barges that connect in groups and trains-of-barges in ways that allow cargo volumes and weights considerably greater than those used by pioneers of modern barge systems and methods in the Victorian era.

Such barges need to be towed by tugboats or pushed by towboats. Canal barges, towed by draft animals on a waterway adjacent towpath were of fundamental importance in the early Industrial Revolution, whose major early engineering projects were efforts to build viaducts, aqueducts and especially canals to fuel and feed raw materials to nascent factories in the early industrial takeoff (18th century) and take their goods to ports and cities for distribution.

The barge and canal system contended favourably with the railways in the early Industrial Revolution before around the 1850s–1860s; for example, the Erie Canal in New York state is credited by economic historians with giving the growth boost needed for New York City to eclipse Philadelphia as America's largest port and city – but such canal systems with their locks, need for maintenance and dredging, pumps and sanitary issues were eventually outcompeted in the carriage of high-value items by the railways due to the higher speed, falling costs and route flexibility of rail transport. Barge and canal systems were nonetheless of great, perhaps even primary, economic importance until after the First World War in Europe, particularly in the more developed nations of the Low Countries, France, Germany and especially Great Britain which more or less made the system characteristically its own.