The Baptist World Alliance (BWA) is a worldwide alliance of Baptist churches. The organisation counts 47,000,000 people in 2020 and is the largest organisation of Baptist churches in the world. Less than a half of the world's Baptists are affiliated with this organisation. Its headquarters are in Falls Church, Washington metropolitan area, Virginia, United States. Its leader is the Argentinian Tomás Mackey.

Show on the life of Jesus at Igreja da Cidade, affiliated to the Brazilian Baptist Convention, in São José dos Campos, Brazil, 2017 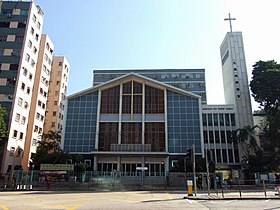 The roots of the Baptist World Alliance can be traced back to the seventeenth century when Baptist leader Thomas Grantham proposed the concept of a congregation of all Christians in the world that are "baptised according to the appointment of Christ."[1] Similar proposals were put forward later such as the call of John Rippon in 1790 for a world meeting of Baptists "to consult the ecclesiastical good to the whole."[1]

It was, however, only in 1904 when such congregation became a reality. John Newton Prestridge, editor of The Baptist Argus, at Louisville, Kentucky called for a world gathering of Baptists. John Howard Shakespeare, editor of The Baptist Times and Freeman, London, endorsed the proposal.[2][3][4] In October 1904, the Baptist Union of Great Britain passed a resolution to invite a Congress to meet with them in 1905. At the Congress, a committee was formed, which proposed a Constitution for a World Alliance. The Baptist World Alliance was founded in London, during this first Baptist World Congress in July 1905.[5][6][7][8]

Membership was opened to "any general Union, Convention or Association of Baptist Churches", and it was decided that the Alliance would "meet in general assembly ordinarily once in five years, unless otherwise determined by the Executive Committee". Three leading personalities involved in the organisation included Prestridge, Shakespeare and Alexander Maclaren (who served as provisional President).

The gathering was referred to as an "alliance" and not a council in order to establish the nature of the dialogue as a meeting. This means that the body wields no authority over participating churches or national Baptist unions, serving only as a forum for collaboration.[9]

In 2020, the Argentinian Tomás Mackey became president of the Alliance.[10]

The Alliance has a Baptist confession of faith.[12]

The alliance's stated goals are to: "(1) To Unite Baptists Worldwide; (2) To Lead in World Evangelization; (3) To Respond to People in Need; and (4) To Defend Human Rights."[13]

The Baptist World Alliance maintains ecumenical relations with the Pontifical Council for Promoting Christian Unity. One series of International Conversations between the BWA and the Catholic Church took place from between 1984 and 1988 moderated by the Reverend Dr David T. Shannon, sometime President of Andover Newton Theological School, and the Most Reverend Bede Heather, Bishop of Parramatta.[17] While this dialogue produced the report called Summons to Witness to Christ in Today's World, the second phase did not push through because of opposition from within the Baptist World Alliance itself.[18] Negotiations continued, however, so that a series of consultations transpired from 2000 to 2003. During this period the Baptists and Catholics discussed important doctrines that divide these denominations.[18] These second series of conversations resulted in formal meetings between 2006 and 2010. The current Co-Moderators are Paul Fiddes, Professor of Systematic Theology in the University of Oxford and formerly Principal of Regent's Park College, Oxford, and Arthur J. Serratelli, Bishop of Paterson.[19]