The Bantu expansion is a major series of migrations of the original Proto-Bantu-speaking group,[3][4] who spread from an original nucleus around West Africa-Central Africa across much of sub-Saharan Africa. In the process, the Proto-Bantu-speaking settlers displaced or absorbed pre-existing hunter-gatherer and pastoralist groups that they encountered.

The primary evidence for this expansion is linguistic – a great many of the languages spoken across Sub-Equatorial Africa are remarkably similar to each other, suggesting the common cultural origin of their original speakers. The linguistic core of the Bantu languages, which comprise a branch of the Niger–Congo family, was located in the adjoining regions of Cameroon and Nigeria. However, attempts to trace the exact route of the expansion, to correlate it with archaeological evidence and genetic evidence, have not been conclusive; thus although the expansion is widely accepted as having taken place, many aspects of it remain in doubt or are highly contested.[5]

The expansion is believed to have taken place in at least two waves, between about 3,000 and 2,000 years ago (approximately 1,000 BC to AD 1). Linguistic analysis suggests that the expansion proceeded in two directions: the first went across the Congo forest region (towards East Africa),[6] and the second – and possibly others – went south along the African coast into Gabon, the Democratic Republic of the Congo, and Angola, or inland along the many south-to-north flowing rivers of the Congo River system. The expansion reached South Africa, probably as early as AD 300.[7][8][9][10][11][12][13][14]

Bantuists believe that the Bantu expansion most probably began on the highlands between Cameroon and Nigeria. The 60,000-km2 Mambilla region straddling the borderlands here has been identified as containing remnants of "the Bantu who stayed home", as the bulk of Bantu-speakers moved away from the region. Archaeological evidence from the separate works of Jean Hurault (1979, 1986 & 1988) and Rigobert Tueche (2000) in the region reveals that this region has been inhabited by the same culture for 5 millennia, from 3000 B.C to date.[15] The majority of the groups of the Bamenda highlands (occupied for 2 millennia to date), somewhat south and contiguous with the Mambilla region, have an ancient history of descent from the north in the direction of the Mambilla region.

Initially, archaeologists believed that they could find archaeological similarities in the ancient cultures of the region that the Bantu-speakers were held to have traversed. Linguists, classifying the languages and creating a genealogical table of relationships, believed they could reconstruct material culture elements. They believed that the expansion was caused by the development of agriculture, the making of ceramics, and the use of iron, which permitted new ecological zones to be exploited. In 1966, Roland Oliver published an article presenting these correlations as a reasonable hypothesis.[16]

The hypothesized Bantu expansion pushed out or assimilated the hunter-forager proto-Khoisan, who had formerly inhabited Southern Africa. In Eastern and Southern Africa, Bantu speakers may have adopted livestock husbandry from other unrelated Cushitic-and Nilotic-speaking peoples they encountered. Herding practices reached the far south several centuries before Bantu-speaking migrants did. Archaeological, linguistic, genetic, and environmental evidence all support the conclusion that the Bantu expansion was a significant human migration.

The Niger–Congo family comprises a huge group of languages spread throughout Sub-Saharan Africa. The Benue–Congo branch includes the Bantu languages, which are found throughout Central, Southern, and Eastern Africa.

A characteristic feature of most Niger–Congo languages, including the Bantu languages, is their use of tone. They generally lack case inflection, but grammatical gender is characteristic, with some languages having two dozen genders (noun classes). The root of the verb tends to remain unchanged, with either particles or auxiliary verbs expressing tenses and moods. For example, in a number of languages the infinitival is the auxiliary designating the future.

Before the expansion of Bantu-speaking farmers, Central, Southern, and Southeast Africa were populated by Pygmy foragers, Khoisan-speaking hunter-gatherers, Nilo-Saharan-speaking herders, and Cushitic-speaking pastoralists.

It is thought that Central African Pygmies and Bantus branched out from a common ancestral population c. 70,000 years ago.[17] Many Batwa groups speak Bantu languages; however, a considerable portion of their vocabulary is not Bantu in origin. Much of this vocabulary is botanical, deals with honey collecting, or is otherwise specialised for the forest and is shared between western Batwa groups. It has been proposed that this is the remnant of an independent western Batwa (Mbenga or "Baaka") language.[18]

Before the Bantu expansion, Khoisan-speaking peoples inhabited Southern Africa. Their descendants have largely mixed with other peoples and adopted other languages. A few still live by foraging often supplemented by working for neighbouring farmers in the arid regions around the Kalahari desert, while a larger number of Nama continue their traditional subsistence by raising livestock in Namibia and adjacent South Africa.

Prior to the arrival of Bantus in Southeast Africa, Cushitic-speaking peoples had migrated into the region from the Ethiopian Highlands and other more northerly areas. The first waves consisted of Southern Cushitic speakers, who settled around Lake Turkana and parts of Tanzania beginning around 5,000 years ago. Many centuries later, around AD 1,000, some Eastern Cushitic speakers also settled in northern and coastal Kenya.[19] 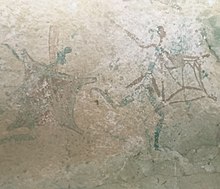 San rock art depicting a shield-carrying Bantu warrior. The movement of Bantu settlers, who migrated southwards and settled in the summer rainfall regions of Southern Africa within the last 2000 years, established a range of relationships with the indigenous San people from bitter conflict to ritual interaction and intermarriage.

It seems likely that the expansion of the Bantu-speaking people from their core region in West Africa began around 4000-3500 BC. Although early models posited that the early speakers were both iron-using and agricultural, definitive archaeological evidence that they used iron does not appear until as late as 400 BC, though they were agricultural.[24] The western branch, not necessarily linguistically distinct, according to Christopher Ehret, followed the coast and the major rivers of the Congo system southward, reaching central Angola by around 500 BC.[25]

It is clear that there were human populations in the region at the time of the expansion, and pygmies are their closest living relatives. However, mtDNA genetic research from Cabinda suggests that only haplogroups that originated in West Africa are found there today, and the distinctive L0 of the pre-Bantu population is missing, suggesting that there was a complete population replacement. In South Africa, however, a more complex intermixing could have taken place.[26]

Further east, Bantu-speaking communities had reached the great Central African rainforest, and by 500 BC, pioneering groups had emerged into the savannas to the south, in what are now the Democratic Republic of Congo, Angola, and Zambia.

Another stream of migration, moving east by 3,000 years ago (1000 BC), was creating a major new population center near the Great Lakes of East Africa, where a rich environment supported a dense population. Movements by small groups to the southeast from the Great Lakes region were more rapid, with initial settlements widely dispersed near the coast and near rivers, due to comparatively harsh farming conditions in areas farther from water. Pioneering groups had reached modern KwaZulu-Natal in South Africa by AD 300 along the coast, and the modern Limpopo Province (formerly Northern Transvaal) by AD 500.[27][28][29]

From the 11th century to 17th century

Between the 11th and 15th centuries, the relatively powerful Bantu-speaking states on a scale larger than local chiefdoms began to emerge: in the Great Lakes region, the savanna south of the Central African rainforest, the present-day South African region: Kingdom of Mapungubwe (c.1075–c.1220) and the Zambezi River where the Monomatapa kings built the famous Great Zimbabwe complex. Such processes of state-formation occurred with increasing frequency from the 16th century onward. They were probably due to denser population, which led to more specialised divisions of labour, including military power, while making outmigration more difficult. Other factors were increased trade among African communities and with European and Arab traders on the coasts, technological developments in economic activity, and new techniques in the political-spiritual ritualisation of royalty as the source of national strength and health.[30]

By the time Great Zimbabwe had ceased being the capital of a large trading empire, speakers of Bantu languages were present throughout much of southern Africa. Two main groups developed: the Nguni (Xhosa, Zulu, Swazi), who occupied the eastern coastal plains, and the Sotho–Tswana, who lived on the interior plateau.

In the late 18th and early 19th century, two major events occurred. The Trekboers were colonizing new areas of southern Africa, moving northeast from the Cape Colony, and they came into contact with the Xhosa, the Southern Nguni. At the same time, major events were taking place further north in modern-day KwaZulu-Natal. At that time, the area was populated by dozens of small clans, one of which was the Zulu, then a particularly small clan of no local distinction whatsoever. In 1816, Shaka acceded to the Zulu throne. Within a year, he had conquered the neighboring clans, and had made the Zulu into the most important ally of the large Mtetwa clan, which was in competition with the Ndwandwe clan for domination of the northern part of modern-day KwaZulu-Natal.

Manfred K. H. Eggert stated that "the current archaeological record in the Central African rainforest is extremely spotty and consequently far from convincing so as to be taken as a reflection of a steady influx of Bantu speakers into the forest, let alone movement on a larger scale."[31]