Bank of China (Chinese: 中国银行; pinyin: Zhōngguó Yínháng; often abbreviated as 中行 or BOC) is one of the four biggest state-owned commercial banks in China. Bank of China is legally separate from its subsidiary Bank of China (Hong Kong), although they maintain close relations in management and administration and co-operate in several areas including reselling BOC's insurance and securities services.

It was founded in 1912 by the Republican government to replace the Daqing Bank. It is the second oldest bank in mainland China still in existence (after the Bank of Communications, founded in 1908). From its establishment until 1942, it issued banknotes on behalf of the Government along with the "Big Four" banks of the period: the Farmers Bank of China, Bank of Communications and Central Bank of the Republic of China. Its headquarters are in Xicheng District, Beijing.[3]

As of 31 December 2009, it was the second-largest lender in China overall, and the fifth-largest bank in the world by market capitalization value.[4]

As of end 2017, it was the fourth-largest bank in the world in terms of assets, ranked after the other three Chinese banks.[5]

The Bank of China's history began in 1905, when the Qing government established Daqing Hubu Bank[6] (大淸戶部銀行) in Beijing, which was in 1908 renamed to Daqing Bank (大淸銀行). When the Republic of China was established in 1912, Chen Jintao was named head of financial reform in President Sun Yat-sen's government. Chen Jintao transformed the bank into the Bank of China, becoming its founder.[7][8][9][10]

It is the second largest lender in China overall, and the fifth largest bank in the world by market capitalization value.[4] Once 100% owned by the central government, via China Central Huijin and National Council for Social Security Fund (SSF), an Initial public offering (IPO) of its shares took place in June 2006, the free float is at present over 26%. In the Forbes Global 2000 it ranked as the 4th-largest company in the world.[11]

It is the most globally-active of China's banks, with branches on every inhabited continent. Outside of mainland China, BOC also operates in 27 countries and areas including Australia, Canada, United Kingdom, Ireland, France, Germany, Italy, Luxembourg, Russia, Hungary, United States, Panama, Brazil, Japan, Republic of Korea, Singapore, Taiwan, Philippines, Vietnam, Malaysia, Thailand, Indonesia, Kazakhstan, Bahrain, Zambia, South Africa, and a branch office in the Cayman Islands.[12] In December 2010, the Bank of China New York branch began offering renminbi products for Americans.[13] It was the first major Chinese bank to offer such a product. 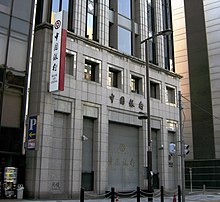 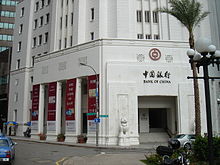 Bank of China building in Singapore 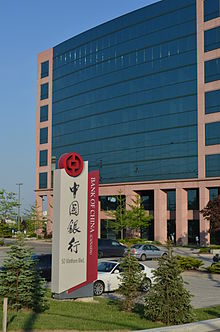 Bank of China in Shenyang

In 2001, BOC regrouped its Hong Kong operations into Bank of China (Hong Kong); then BOCHK listed on the Hong Kong Stock Exchange in October 2002. Two-thirds of its share capital are in free float. The bank's headquarters in Hong Kong are located in the Bank of China Tower, designed by the renowned architect I.M. Pei, and was opened to the public in 1990 as the tallest building in Hong Kong at that time.[citation needed]

It listed on the Hong Kong Stock Exchange (independently from BOCHK) (SEHK:3988) by floating the largest initial public offering (IPO) in the world by any institution since 2000 on June 1, 2006, raising US$9.7 billion. The IPO attracted HK$286 billion (US$36.7 billion) in retail orders and was the most heavily oversubscribed in the history of the Hong Kong Stock Exchange. The offer was around 76 times oversubscribed. Although some financial analysts advised caution due to the worrying amounts of non-performing loans, this hardly deterred investors. The IPO share price started at HK$2.95 per share and jumped 15% (to HK$3.40) after the first day of trading. 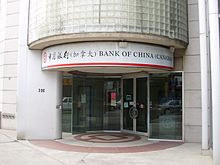 A branch located in Toronto's Chinatown

Bank of China (Canada), commonly known as BOCC, is the Canadian subsidiary of the Bank of China (BOC). The Bank of China began its business in Canada by opening a representative office in Toronto on September 8, 1992. BOCC was incorporated as a subsidiary of BOC in 1993 under Schedule II of the Bank Act.[30] BOCC provides the following types of banking services in Canada: bank accounts to both personal and commercial banking clients, remittance services (including bank drafts and wire transfers), loans and mortgages, foreign exchange services, and China visa application assistance services where by it acts as agent, however plans for a China Visa Application Centre are being made and it is anticipated that the Consulate General of the People Republic of China in Toronto will entrust all future China Visa applications to Bank of China Canada's Visa Application Centre.

In Canada, BOCC has ten locations located in Markham, Scarborough (under the name "GTA Toronto" branch), Toronto (several branches, in North York and downtown), Mississauga, Vancouver, Montreal, and Calgary. It previously had branches in Burnaby and Richmond. As well, the bank is a member of the Canadian Bankers Association (CBA); registered member with the Canada Deposit Insurance Corporation (CDIC), a federal agency insuring deposits at all of Canada's chartered banks; and, a member of Interac, which handles transactions between automated teller machines of different banks and debit card transactions.

As of 30 September 2015, largest shareholders of the Bank of China ordinary shares (both A shares and H shares) were:[33]

As of 30 September 2015, largest shareholders of the Bank of China preference shares (both domestic and offshore) were:[34]

After COVEC withdrew from completing its construction of the A2 highway in Poland, Bank of China was to pay a performance guarantee to the Polish government's road organization GDDKiA. However, with Export-Import Bank of China, they refused to pay this; only Deutsche Bank honoured its obligations under the court decision.[36]

On August 8, 2008, the family of Daniel Wultz, an American teenager killed in a 2006 terrorist attack in Israel, filed suit against the Bank of China in U.S. District Court for the District of Columbia. The case was subsequently transferred to the United States District Court, Southern District of New York, where litigation continues. On October 29, 2012, the Honorable J. Scheindlin issued a ruling compelling Bank of China to provide discovery.[37][38][39][40][41]

In 2012, the families of eight terror victims of the 2008 Mercaz HaRav massacre in Jerusalem filed a $1 billion lawsuit against the Bank of China. The suit asserted that in 2003 the bank's New York branch wired millions of dollars to Hamas from its leadership in Syria and Iran. The Bank of China subsequently denied providing banking services to terrorist groups: "The Bank of China has always strictly followed the UN's anti-money laundering and anti-terrorist financing requirements and regulations in China and other judicial areas where we operate."[42][43][44]