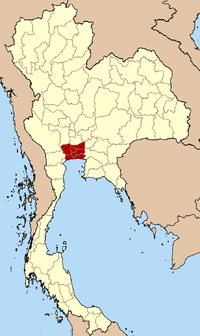 The Bangkok Metropolitan Region (BMR) (Thai: กรุงเทพมหานครและปริมณฑล; RTGS: krung thep maha nakhon lae parimonthon; lit. 'Bangkok and environs'), may refer to a government-defined "political definition" of the urban region surrounding the metropolis of Bangkok, or the built-up area, i.e., urban agglomeration of Bangkok, Thailand, which varies in size and shape, and gets filled in as development expands.

The political definition is defined as the metropolis and the five adjacent provinces of Nakhon Pathom, Pathum Thani, Nonthaburi, Samut Prakan, and Samut Sakhon.

Due to the success of the service and tourism industry in Bangkok, the city has gained in popularity for work among provincial Thais from the rural areas and with people from many countries in the Indochina region as well as many South Asian countries. In the past 20–30 years, there has been a large influx of Indians into Thailand (especially Punjabis, Gujaratis, Tamils and Pashtuns), and also Persians, Portuguese, Khmer Krom, Mons, Chinese, as well as others emigrating to Thailand and Bangkok. There are large numbers of workers who legally reside outside the metropolitan area and travel into the city for day jobs. The population of the Bangkok metropolis ("the city") increases to nine million during the day, from eight million at night. The morning influx into the greater metropolitan region is not very significant, rather the influx is seasonal depending upon crop seasons in the rest of the country.

Bangkok has seen rapid urbanization since its population reached two million in the 1960s. Since the 1980s, greater Bangkok's built-up areas have spilled beyond Bangkok's borders to neighboring provinces, initially to the north and south. Despite a general suburbanization trend, Bangkok remained centralized and the city core remained extremely dense until the early 2000s as heavy commuter traffic limited choices. The countryside between once independent towns and the capital became ever more filled in, with the advent and expansion of urban rail transit, as well as cheap credit enabling automobile adoption by the working class. The outward push of suburbanization has intensified as park and ride lots near train stations have sprung up.

In a manner similar to Los Angeles, Bangkok is transforming into a region where traffic flows in all directions rather than simply to the central core, as it once did. Suburbanziation has swallowed ever more fields and swamps, though even parts of Bangkok itself are not built-up. The first areas to suburbanize were in Pathum Thani, Nonthaburi, and Samut Prakan Provinces. Other areas more recently have agglomerated in Samut Sakhon and Nakhon Pathom. Samut Prakan, Nonthaburi, Pathum Thani and Samut Sakhon all have historic city centers.

Due to a lack of strict zoning laws, the metropolitan areas' growth appears haphazard. Central areas like Yaowarat, Siam, Sukhumvit, and Sathorn have seen skyrocketing land speculation as foreign investors are allowed to own condominiums, giving rise to Manhattanization. At the same time, fringe areas are being developed and the boundaries are no longer visible between each provincial city center. Due to the speed of this urban sprawl over the past twenty years,[when?] the Bangkok Metropolitan Administration has sought to tackle rising problems of commute times, pollution, and deteriorating air quality. Air quality has been declining year by year,[2][3][4][5] and the city still lacks an effective mass transit network outside Bangkok proper and a clean and effective plan to resolve environmental issues.

As of 31 October 2012, some 7,384,934 vehicles were registered in the metro area, roughly one vehicle for every two persons.[14] To alleviate the ensuing congestion, massive railway development is ongoing, but its construction is causing large scale disturbance to major thoroughfares.

Bangkok's last undisturbed forested zone, Bang Kachao, in Samut Prakan's Phra Pradaeng District, also known as "the green lung" or (Thai: กระเพาะหมู; RTGS: krapho mu) ('pig's stomach', due to its shape) is threatened by urban sprawl, especially since a new city plan was implemented by Samut Prakan authorities. The plan has changed the pure green area to a "green and white" area, which allows residents to grow crops. Bang Kachao covers over 11,818 rai in six tambons in Phra Pradaeng.[15]