بندرعباس‎) is a port city and capital of Hormozgān Province on the southern coast of Iran, on the Persian Gulf. The city occupies a strategic position on the narrow Strait of Hormuz, and it is the location of the main base of the Iranian Navy. Bandar Abbas is also the capital and largest city of Bandar Abbas County. At the 2016 census, its population was 526,648.[2]

Bandar Abbas has always been a port, and as such its various names have all addressed this function. The most common name over time (Gameroon) has traditionally been said to derive from Persian gümrük, customhouse (from Late Greek kommerkion, from Latin commercium, "commerce"), but is now speculated to be from Persian kamrūn, shrimp (which in Portuguese is "camarão", similar to the former Portuguese name).[3] Its current name is derived from that of Shah Abbas I [4] paired with 'port.'

Bandar Abbas has been romanized as Bandar ‘Abbās and Bandar ‘Abbāsī. It has also been referred to as Jaroon to the Arabs and Cameron to the English. Bandar Abbas was formerly known as Cambarão and Porto Comorão to Portuguese traders, as Gombroon to English traders and as Gamrun or Gumrun to Dutch merchants.[5]

The earliest record of Bandar Abbas is during the reign of Darius the Great (between 522 and 486 BCE). Darius's commander, Silacus, embarked from Bandar Abbas to India and the Red Sea. During Alexander's conquest of the Persian Empire, Bandar Abbas was known under the name of Hormirzad.

In the year 630 CE, Maharaja Derbar Raja of Gemeron was defeated in battle and escaped to Ceylon, and he was later blown off course by a storm to the remote shores of Kuala Sungai Qilah, Kedah (now Malaysia). The inhabitants of Kedah found him to be a valiant and intelligent person, and they made him the king of Kedah. In the year 634 CE, a new kingdom was formed in Kedah consisting of Persian royalty and native Malay of Hindu faith, the capital was Langkasuka (see Kedah Sultanate and Early history of Kedah). 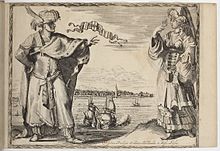 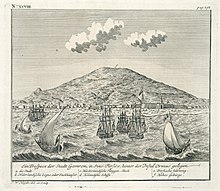 By the 16th century, Bandar Abbas was known as Gamrūn to the Persians. In 1565, a European navigator called it Bamdel Gombruc (that is, Bandar Gümrük, or "Customhouse Port"), citing this as the Persian and Turkish name. Bandar Abbas was conquered by the Portuguese in 1514, and was an important location to protect their commerce in the Persian Gulf and India.[6][7] They named the city Comorão, due to the presence of lobsters and crabs on its shores.

English and Dutch trading posts in Bandar Abbas in 1704 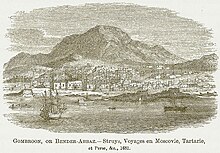 In 1614, Comorão was taken by ‘Abbās the Great from the Portuguese and renamed Bandar-e ‘Abbās ("Port of ‘Abbās"). Backed by the English navy, ‘Abbās developed the city (known to the English-speaking world as Gombraun) into a major port. By 1622, the Portuguese and English names had been officially combined to form Combrù or Combu, although the inhabitants still called it Bandar-e ‘Abbās. Sir Thomas Herbert said the official English name was Gumbrown, but pronounced [gŏmrōōn]. He wrote in 1630 that "some (but I commend them not) write it Gamrou, others Gomrow, and othersome Cummeroon."[citation needed] By the 1670s, the city was known as Gameroon.

In 1622 CE Shah Abbas defeated Portuguese troops with the help of British troops and Iranian commander Imam Quli Khan. In honor of this victory Gumbroon was renamed Bandar Abbas Port. In the current division of Bandar Abbas in Hormozgan province and one of the most important strategic and commercial center is in the vicinity of the Persian Gulf and Oman Sea.

Between 1794 and 1868, Bandar Abbas was under the control of the Sultanate of Oman and Zanzibar through a lease agreement with Persia. The details of the original lease apparently differed between the Arabic and Persian versions. The Omanis controlled the coastal stretch of some 100 miles from Sadij to Khamir, and inland about 30 miles, as far as Shamil. They also controlled the islands of Hormuz and Qeshm. In 1823, the Persians attempted to oust the Omanis, but the sultan managed to keep his hold on Bandar through bribery and tribute of the governor of Shiraz. In 1845–46, an army under the governor general of Fars menaced Bandar to extort tribute, while another army under the governor of Kerman besieged Minab. The Omanis threatened to blockade Persia, but the British resident at Bushir convinced them to back down.[8]

The Persians recovered the city in 1854, while the sultan was in Zanzibar. Under British pressure following the Anglo-Persian War in 1856, Persia renewed Oman's lease on favourable terms. It was clarified that the leased territory belonged to the province of Fars and that the Persian flag would fly over Bandar Abbas. The rental rate was also increased. Under British pressure the agreement was renewed in 1868, but at a higher rate of rent and for a shorter duration. Two months after its renewal, the lease was cancelled by the Persian government, citing a clause which permitted its termination if the sultan of Oman were overthrown.[8]

An earthquake in July 1902 damaged parts of the city, including the governor's house and the customs office, and nearby Kishm island.[9]

Mohammad Reza Shah Pahlavi paid particular attention to Bandar Abbas as a strategic port and during his time the government invested huge amounts of capital in the infrastructure.

Bandar Abbas serves as a major shipping point, mostly for imports, and has a long history of trade with India, particularly the port of Surat. Thousands of tourists visit the city and nearby islands including Qeshm and Hormuz every year.

Bandar Abbas has a hot desert climate (Köppen climate classification BWh). Maximum temperature in summers can reach 49 °C (120 °F) while in winters the minimum temperature may drop to 5 °C (41 °F). The annual rainfall is around 170 millimetres (6.7 in) and the average relative humidity is 65%.

In the summer, Bandar Abbas sees some of the highest average dew points of any city in the world, averaging 27 °C (81 °F) and frequently exceeding 30 °C (86 °F). As a result, heat indices generally top 50 °C (122 °F) for most days during the summer.[10][11] This immense humidity causes summer diurnal ranges to be lower than in most desert climates, and is a result of air flow from the warm waters of the Persian Gulf. 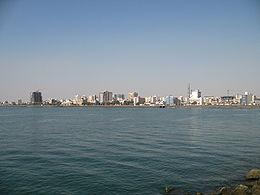 Bandar Abbas is accessible via the following highways:

Since 1993, Bandar Abbas has been the southern terminus of Islamic Republic of Iran Railways' main North–South corridor that links it to Yazd, Qom, Tehran and Qazvin to the north.[citation needed] 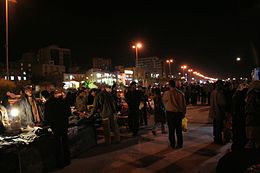 Aluminium Hormozgan is Bander Abbas's main football (soccer) team. The team was founded in 2006. In 2012 they were promoted to the Iran Pro League but after their first season there they were relegated back to the Azadegan League where they currently play. Bander Abbas also has a second less supported team, Shahrdari Bandar Abbas, which was founded in 2005 and is the municipality's team.[citation needed]