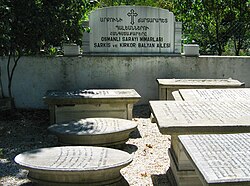 Graves of the Balyan family in the Armenian cemetery on Nuh Kuyusu Caddesi, Bağlarbaşı, Üsküdar, Istanbul.

Recently renovated graves of the Balyan family in the Armenian cemetery in Üsküdar, Istanbul.

The Balyan family (Armenian: Պալեաններ; Turkish: Balyan ailesi or Palyan ailesi) was a prominent Ottoman Armenian family of court architects in the service of Ottoman sultans and other members of the Ottoman dynasty during the 18th and 19th centuries. For five generations, they designed and constructed numerous major buildings in the Ottoman Empire, including palaces, mansions, konaks, kiosks, yalis, mosques, churches, and various public buildings, mostly in Constantinople (present-day Istanbul).

Mason Bali (Mason Balen, Turkish: Meremmetçi Bali Kalfa or Meremmetçi Balen Kalfa), a masonry craftsman from the Belen village of Karaman in central Anatolia, was the founder of the dynasty. He moved to Istanbul, where he learned of an Armenian palace architect of Sultan Mehmed IV (1648–1687), whom he met and replaced as armenian himself. When Bali died in 1725, his son Magar took his place as architect at the sultan’s court.[citation needed]

Architect Magar (Turkish: Mimar Magar) was charged with important projects and was consequently frequently promoted to higher ranks. However, as a result of a denunciation, he was driven away from the court of Sultan Mahmud I (1730–1754) to exile in the eastern Anatolian town of Bayburt. There, Magar taught his elder son Krikor architecture before being pardoned and returning to Istanbul. Following his retirement, his son Krikor took over his position. Magar’s second son Senekerim collaborated with his brother Krikor. Magar died in Bayburt.[citation needed]

Krikor Balyan (Armenian: Գրիգոր Պալեան, also known as Krikor Amira Balyan; 1764–1831) was the first member of the family to use the surname Balyan. He was called Baliyan or Balyan after his grandfather and later adopted this as the family name Balyan.[citation needed] He was the son-in-law of Mason Minas and father-in-law of Ohannes Amira Severyan, both of whom were palace architects.[citation needed] Krikor received his credential of architecture from Sultan Abdul Hamid I (r. 1774–87). He became unofficial advisor to Sultan Selim III (r. 1789–1807), and was close to Sultan Mahmud II (r. 1808–1839). He was exiled in 1820 to Kayseri in central Anatolia, because of his involvement in a dispute between Gregorian and Catholic Armenians. He was pardoned and allowed to return to Istanbul shortly after a friend of his in the palace, Amira Bezjian.[citation needed]

Senekerim Balyan (Armenian: Սենեքերիմ Պալեան; 1768–1833) was the son of Architect Magar and the younger brother of Krikor Balyan. He worked together with his brother, but remained in the background.[citation needed] He rebuilt the Beyazit Fire Tower, which had been constructed in wood in 1826 by his brother Krikor, but destroyed after a fire. He died in Jerusalem and was buried in the Armenian church yard.[specify]

Senekerim's works include the Beyazıt Fire Tower (1828) and the Surp Asdvadzazdin Armenian Church in Ortaköy (1824).

Garabet Amira Balyan (Armenian: Կարապետ Պալեան; 1800–1866) was born in Constantinople. At his father's death, he was very young and not experienced enough to take over his father's position by himself. Thus he served alongside his uncle-in-law Mason Ohannes Serveryan. Garabet served during the reigns of Mahmud II (1808–1839), Abdul Mecid I (1839–1861), and Abdulaziz (1861–1876), and constructed numerous buildings in Istanbul. The best known of his works is Dolmabahçe Palace, which he built in collaboration with his son Nigoğayos.[1] Another notable architectural work of his is Beylerbeyi Palace, which was built in cooperation with his other son Sarkis.

Garabet Balyan was also active in the Armenian community's educational and administrative matters and carried out research work on Armenian architecture. His four sons, Nigoğayos, Sarkis, Hagop, and Simon, succeeded him after he died of a heart attack in 1866 while conversing with friends.[2] 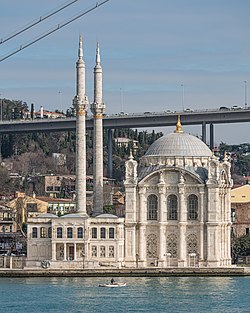 Ortaköy Mosque in front of the Bosphorus Bridge 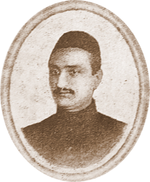 Nigoğayos Balyan (Armenian: Նիկողայոս Պալեան; also known as Nigoğos Balyan; 1826–1858) was the first son of Garabet Armira Balyan. In 1843, he was sent to Paris together with his brother Sarkis to study architecture at the Collège Sainte-Barbe de Paris. Due to an illness, however, he and his brother had to return to Istanbul in 1845. Working alongside his father Garabet, Nigoğayos gained experience. He was appointed arts advisor to Sultan Abdulmecid I (1839–1861). He founded also a school for domestic architects in order to teach Western architecture.[citation needed]

Nigoğayos worked together with his father on the building of Dolmabahçe Palace (1842–1856). He participated in the preparations for the Armenian National Constitution.[4] Nigoğayos died in Istanbul in 1858 of typhoid fever at the age of 32.

Sarkis Balyan (Armenian: Սարգիս Պալեան; 1835–1899) was the second son of Garabet Balyan. In 1843, he followed his elder brother Nigoğayos to Paris. He had to return to Istanbul in 1845 due to an illness of his brother. In 1847, Sarkis went to Paris again to attend Collège Sainte-Barbe de Paris, which he finished after three years. Later, he studied at the Academy of Fine Arts.[specify]

Known as a fast worker, his professional life was interrupted by the death of brother Hagop in 1875 and by Abdülhamid II's accession to the throne (1876–1909). Due to political accusations, he was forced into exile in Europe for 15 years, but eventually returned to Turkey through the intercession of Hagop Kazazian Pasha on his behalf.[5]

His most important work is the Valide Sultan Kiosk. Interested in all branches of the fine arts, Sarkis supported Armenian writers, musicians, and particularly theater actors. He was also a member of the Armenian Patriarchate’s Assembly. He was awarded the title Ser Mimar (Chief Architect of Ottoman Empire).[citation needed]

Hagop Balyan (Armenian: Հակոբ Պալեան; 1838–1875) was the third son of Garabet Balyan. He worked alongside his brother Sarkis on various projects in Istanbul. Hagop died in Paris in 1875 at the age of 37; he was buried in the Père Lachaise Cemetery.

Simon Balyan (Armenian: Սիմոն Պալեան; 1848–1894) was the youngest son of Garabet Balyan. He was also an architect.

Levon Balyan (Armenian: Լեւոն Պալեան; 1855–1925) was the son of Nigoğayos Balyan. He attended Collège Sainte-Barbe in Paris in 1869.

Born in Amman, Jordan he is 15 years old he graduated from the Armenian school Yuzbashian Gulbenkian in 6th grade then he went to the bishop school, he changed the school went to N.O.S.

Buildings and structures designed and constructed by Balyan family members:[6]