Balanga, officially the City of Balanga (Tagalog: Lungsod ng Balanga; Kapampangan: Lakanbalen ning Balanga), is a 4th class city and capital of the province of Bataan, Philippines. According to the 2015 census, it has a population of 96,061 people.[3]

Paterno St. in Barangay Poblacion, Balanga, during the 1970s

Balanga, the capital of Bataan, was formerly a village of Abucay before it was established as a mission of the Dominican Order in the Provincial Charter of April 21, 1714, and later declared a vicariate on April 18, 1739, under the patronage of Saint Joseph. Upon the establishment of Bataan as a separate province in 1754, Balanga was made its capital by General Pedro Manuel Arandia due to its favorable location, at the heart of the new territorial jurisdiction.

The word Balanga originates from the Kapampangan word "balañga" (clay pot, or "bang" in Tagalog), which the town used to produce and which were among the best that can be found in the country.

On December 30, 2000, Balanga was inaugurated as a City by the Republic Act 8984 authored by Congressman Enrique "Tet" Garcia.[5]

The city has extended its urban fringe to the west of Roman Superhighway and a new growth center in Barangay Tuyo has been delineated in the Comprehensive Land Use Plan. During the past years, the city saw a high record of residential growth. Consequently, with the expansion of the physical limits of the urban core, as well as the expected large increases in population, and the city's attractiveness to commercial and employment activities, the City Government of Balanga decided to undertake a Master Planning exercise and to propose various developmental projects that would establish Balanga as a well-planned community with quality and character that is innovative and special, although this is currently hindered by an unreliable electricity supply.[6]

Balanga City is primarily a residential-agricultural city, with a rapidly growing commercial sector. It has a total land area of 11,163 hectares (8.13% of Bataan). It borders Pilar to the south, Abucay to the north, Morong to the west, and Manila Bay to the east.

Pursuant to the Local government in the Philippines",[11][12] the political seat of the municipal government is located at the City Hall. In the History of the Philippines (1521–1898), the Gobernadorcillo is the Chief Executive who holds office in the Presidencia. During the period of American rule (1898–1946) (History of the Philippines (1898-1946)), the elected Mayor and local officials, including the appointed ones, hold office at the Municipal Town or City Hall. The legislative and executive departments perform their functions in the Sangguniang Panglungsod (Session Hall) and the Regional and Metropolitan Trial Courts, respectively, and are located in the second floor of the City Hall and in the Halls of Justice.

Landmarks and places of interest 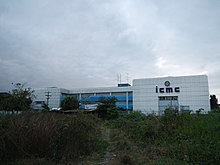 Balanga City is the educational center of the province of Bataan. It currently has one public university and several private colleges offering various courses such as accountancy, business administration, computer science and information technology, elementary and secondary education, engineering, and health professions like nursing and midwifery.

Tomas del Rosario College is one of the oldest private educational institutions in the city. It is located on Capitol Drive in Barangay San Jose.