The Municipality of Baie-James (French: Municipalité de Baie-James) was a municipality in northern Quebec, Canada, which existed from 1971 to 2012. Located to the east of James Bay, Baie-James covered 297,332.84 km2 (114,800.85 sq mi) of land, making it the largest incorporated municipality in Canada — only eight unorganized territories were larger.[4] Its territory almost entirely (about 98%) covered the administrative region of Jamésie, although it contained less than five percent of the population. Essentially, it was the remainder of the Jamésie Territory's land after all of the major population centres were removed.

On July 24, 2012, the Quebec government signed an accord with the Cree that would result in the abolition of Baie-James and the creation of a regional government known as Eeyou Istchee James Bay Territory.[5]

The hydroelectric power plants of the La Grande Complex were all located within the municipal boundaries of Baie-James, making the municipality strategically important to Quebec's energy policy. Other important economic sectors are mining, softwood logging, forestry, and tourism.

The municipality was created in 1971 and was run by the board of directors of the Société de développement de la Baie James. It managed the territory of the James Bay and Northern Quebec Agreement between the 49th and 55th parallel, with the exception of the Cree Category 1 lands and the enclaves of Chapais, Chibougamau, Lebel-sur-Quévillon and Matagami.

In December 2001, the municipal council was reformed. It became a municipality of a special type directed by the mayors of the four enclave towns, as well as the chairpersons of the local community councils of Radisson, Valcanton and Villebois. An eighth seat is reserved for a representative coming from the non-urban territory. The municipality gained additional authority and can exert certain powers as a regional county. 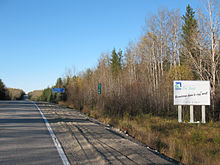 The primary roads to and within Baie-James are:

Air transportation is through the La Grande Rivière Airport near Radisson, which provides scheduled air service to Montreal and Puvirnituq.

Nearby lakes include Lake Naococane.