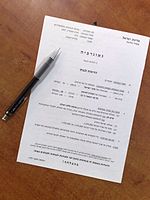 A Bagrut certificate is awarded by the Israeli Ministry of Education to students who pass the ministry's required written (and in some cases oral) subject-matter examinations with a passing mark (55% or higher) in each exam. The Bagrut certificate however should not be confused with a high school diploma (te'udat g'mar tichon, Hebrew: תעודת גמר תיכון‎، Arabic: شهادة انهاء الثانويّة), which is a certificate awarded by the Ministry of Education attesting that a student has completed 12 years of study. Bagrut scores are one of the criteria examined in applications to elite military units and Israeli academic institutions.[2] Other criteria include students' high school grades and the Psychometric Entrance Test.

Bagrut exams are frequently compared[by whom?] to the New York State Regents Examinations, the College Board's Advanced Placement (AP) tests, the British A-levels, the German Abitur, and the European Matura.

Bagrut examinations assess knowledge on subjects studied in high school. The process of matriculation in Israel is supervised by the country's Ministry of Education. The exams of all compulsory subjects and most elective subjects are designed and written by the Ministry, thereby creating a standard measure of the students' knowledge throughout the country. In academically oriented high schools, the last two years of studies are geared to preparing students for the bagrut exams.

Most exams are available in different levels of difficulty, expressed in "units of study". In most subjects, students may choose the number of units in which they are tested. In order to receive a "full" matriculation certificate, the student must take and pass at least one subject matter exam at the 5-unit level of difficulty and earn a total of at least 21 combined study units in all bagrut exams taken. Correspondingly, the make up of a student's classes during his or her high school years is matched to the student's expected units of study they will test in their bagrut exams. So for example, a student who is planning to take the 5-unit mathematics exam will take mathematics courses specifically designed for a 5-unit level of difficulty all throughout their high school career.

65.5% of Israeli high school 2014 graduates or other individuals studying for the 2014 exam (usually post-compulsory military service persons completing Bagrut requirements later in life in order to apply for higher education) had passed the requirements to be eligible to receive a Bagrut certificate. Of the overall population who was of high school graduation age in 2019, 76.1% were eligible to receive a Bagrut certificate.[3]

A copy of the 2010 mathematics exam (in the four and five units levels) was leaked to students, but a teacher reported it to authorities and all tests were replaced.[4]

In 2011, the percentage of 17-year-olds who passed the matriculation exams rose to 48.3 percent and the number of students sitting for the exams in both the Jewish and the Arab school systems increased.[5]