A cheeseburger is a hamburger topped with cheese. Traditionally, the slice of cheese is placed on top of the meat patty, but the burger can include variations in structure, ingredients and composition. The cheese is usually added to the cooking hamburger patty shortly before serving, which allows the cheese to melt. As with other hamburgers, a cheeseburger may include toppings, such as lettuce, tomato, onion, pickles, bacon, mayonnaise, ketchup, mustard or other toppings.

In fast food restaurants, the cheese used is usually processed cheese, but any other meltable cheeses may be used. Common examples include cheddar, Swiss, mozzarella, blue Cheese, and pepper jack.

By the late 19th century, the opening of the vast grasslands of the Great Plains to cattle ranching had made it possible for many Americans to consume beef almost daily. The hamburger was, and remains, one of the cheapest sources of beef in America.[1]

Adding cheese to hamburgers became popular in the late-1920s to mid-1930s, and there are several competing claims as to who created the first cheeseburger. Lionel Sternberger is reputed to have introduced the cheeseburger in 1926 at the age of 16 when he was working as a fry cook at his father's Pasadena, California sandwich shop, "The Rite Spot", and "experimentally dropped a slab of American cheese on a sizzling hamburger."[2][3][4][5][6] An early example of the cheeseburger appearing on a menu is a 1928 menu for the Los Angeles restaurant O'Dell's which listed a cheeseburger smothered with chili for 25 cents.[7][8][9]

Other restaurants also claim to have invented the cheeseburger. For example, Kaelin's Restaurant in Louisville, Kentucky, said it invented the cheeseburger in 1934.[10] One year later, a trademark for the name "cheeseburger" was awarded to Louis Ballast of the Humpty Dumpty Drive-In in Denver, Colorado.[11] According to Steak 'n Shake archives, the restaurant's founder, Gus Belt, applied for a trademark on the word in the 1930s.[12][13][14]

The steamed cheeseburger, a variation almost exclusively served in central Connecticut, is believed to have been invented at a restaurant called Jack's Lunch in Middletown, Connecticut, in the 1930s.[15]

In the United States, National Cheeseburger Day is celebrated annually on 18 September.[17] 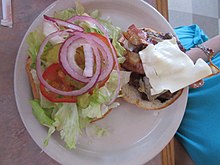 The ingredients used to create cheeseburgers follow similar patterns found in the regional variations of hamburgers, although most start with ground beef. Common cheeses used for topping are American, Swiss, and other meltable cheeses. Popular toppings include lettuce, tomato, onion, pickles, bacon, avocado or guacamole, sliced sautéed mushrooms or onions, cheese sauce or chili, but the variety of possible toppings is broad.

A cheeseburger may have more than one patty or more than one slice of cheese—it is reasonably common, but by no means automatic, for the number to increase at the same rate with cheese and meat interleaved. A stack of two or more patties follows the same basic pattern as hamburgers: with two patties will be called a double cheeseburger; a triple cheeseburger has three, and while much less common, a quadruple has four.[18][19]

Sometimes cheeseburgers are prepared with the cheese enclosed within the ground beef, rather than on top. This is sometimes known as a Jucy Lucy.[20]

Traditionally, this dish breaches the kosher laws (Hebrew: כַּשְׁרוּת‎; kashrut) observed by Judaism as it combines ground beef and cheese. Mixtures of milk and meat (Hebrew: בשר בחלב‎, basar bechalav, literally "meat in milk") are prohibited according to Jewish religious law (Hebrew: הלכה‎; halakha), following a verse in the Book of Exodus in which Jews are forbidden from "boiling a (kid) goat in its mother's milk" (Exod. 34:26).[21][22] This prohibition appears again in Deuteronomy.[23] This dietary law sparked controversy in Jerusalem when McDonald's began opening franchises there that sold cheeseburgers.[24] Since that time, McDonald's has opened both kosher and non-kosher restaurants in Israel.[25]

In an attempt to provide a "kosher cheeseburger", a kosher restaurant in New York City created a controversial cheeseburger variation which replaces cheese with soy cheese.[26]