Baarle-Hertog (Dutch pronunciation: [ˌbaːrlə ˈɦɛrtɔx]; French: Baerle-Duc, pronounced [ba.ɛʁl(ə).dyk]), is a Flemish municipality of Belgium, much of which consists of a number of small Belgian exclaves fully within the Netherlands.

Surrounded by the Dutch province of North Brabant, Baarle-Hertog however is part of the Belgian province of Antwerp. On 1 January 2006 it had a population of 2,306. The total area is 7.48 square kilometres (2.89 square miles) which gives a population density of 308 inhabitants per km² (798 inhabitants/sq mi). 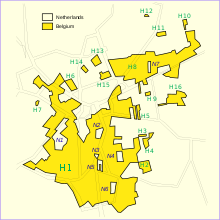 Map showing the enclaves of Baarle-Hertog

Baarle-Hertog is noted for its complicated borders with Baarle-Nassau, Netherlands.[2]

The border's complexity results from a number of medieval treaties, agreements, land-swaps and sales between the Lords of Breda and the Dukes of Brabant. Generally speaking, predominantly agricultural or built environments became constituents of Brabant and other parts devolved to Breda. These distributions were ratified and clarified as a part of the border settlements agreed under the Treaty of Maastricht in 1843. The tight integration of the European Union and in particular the Schengen Treaty have made many of the practicalities of the situation substantially simpler since the 1990s.

In total it consists of 24 separate parcels of land, none of which is contiguous with the rest of Belgium. The largest single section of the municipality of Baarle-Hertog, namely Zondereigen (named after its main hamlet) is located within mainland Belgium right on the contiguous border (north of the town of Merksplas). In addition to this there are twenty Belgian exclaves fully within the Netherlands and three other sections straddling the contiguous Dutch-Belgian border. There are also seven Dutch enclaves within the Belgian exclaves (i.e., counter-exclaves) that are part of the territory of the Netherlands. Six of these Dutch enclaves are located within the largest Belgian exclave, and a seventh in the second-largest Belgian exclave. An eighth Dutch exclave is located near Ginhoven.

During the First World War, this situation meant that the German Imperial Army could not occupy these parts of Belgium without crossing the Netherlands, which the Dutch government did not allow. Thus, these pieces of Belgium became a place where refugees could safely stay.[3] A clandestine radio transmitter was smuggled in and from there worked with the Belgian resistance. The Dutch government fenced off these areas and controlled access in or out of them, building a church and school for the Belgian people who were effectively stranded within the enclaves.[4][circular reference] This situation did not exist in the Second World War, as both countries were occupied by Nazi Germany.

Some houses in the town of Baarle-Hertog/Baarle-Nassau are divided between the two countries. At one time, according to Dutch laws restaurants had to close earlier. For some restaurants on the border, this simply meant that the customers had to move to a table on the Belgian side.[5] In 2020, restrictions due to the COVID-19 pandemic differ between the two countries, for instance preventing a Belgian citizen living metres away from an open Dutch bar from patronising it.[6]

Many fireworks shops are found in Baarle-Hertog, as Belgian laws controlling the sale of fireworks are more lenient than those of the Netherlands. Many Dutch tourists come to Baarle-Hertog to buy fireworks to celebrate the New Year.

Two villages in the municipality, Zondereigen and Ginhoven, are located in the main territory of Belgium.

These are all part of Baarle-Nassau Commune.

These are all part of Baarle-Hertog Commune, and are surrounded by Baarle-Nassau Commune (Netherlands).

It has a joint library with Baarle-Nassau with Belgian and Dutch staff.[9]