listen)) is a province of Vietnam. It is located in the Southeast region of the country and the Southern Key Economic Zone 2, bordering Bình Phước Province to the north, Ho Chi Minh City (HCMC) to the south and southwest, Tây Ninh Province to the west, and Đồng Nai Province to the east. The province was created from Sông Bé Province on 1 January 1997.

Bình Dương is considered to be the gateway to HCMC, the economic cultural centre of the country. Endowed with convenient geography conditions, Bình Dương has an extremely important road network. Major highways of the country cross Bình Dương such as National Road (NR) no. 13, NR no. 14, the HCMC Route and the Trans-Asian Highway. Bình Dương is only 10–15 kilometres (6.2–9.3 mi) from Tân Sơn Nhất International Airport and important ports. All of the advantages create favourable conditions to achieve social and economic development.[2]

Bình Dương Province is situated on relatively level terrain, and is crossed by the Saigon, Đồng Nai, and Bé rivers. It also has some hills. Bình Dương can be seen from the Lái Thiêu central church. Although Bình Dương is flat, it is higher than Ho Chi Minh City. Across Bình Dương there are many different topographic regions, including low mountainous terrain with slight undulation, flat plains and alluvial valleys. There are some low mountains, including Châu Thới in Dĩ An and Cậu mountain (also called Lấp Vò) in Dầu Tiếng district and some low hills. Natural effects have created many different types of landform including worn areas, accumulative areas (due to the deposition of corrosive materials in the flow) and some areas that are worn, accumulative and depositional at the same time. This is due to rainfall and the flow affecting the ground, with the effects of wind, temperature, climate, the erosion and collapse due to gravity of the geology. The impact took place over millions of years.[3]

Bình Dương's climate, like the climate of the rest of the Southeast region, is hot and rainy, with high humidity. It has a tropical monsoon climate, divided into two distinct dry and wet seasons. The rainy season usually starts in May and lasts until late October. In the early months of the rainy season, there are regular short but heavy showers, while July, August, and September usually have continuous rain, sometimes lasting for 1–2 days. Bình Dương seldom experiences hurricanes and is only otherwise affected by local storms. The average annual temperature in Bình Dương is 26–27 °C (79–81 °F), with the highest temperature recorded reaching 39.3 °C (102.7 °F), but the overnight low can fall to 16–17 °C (61–63 °F). In the dry season, the average annual humidity is between 76–80%, with the highest at 86% in September and the lowest at 66% in February. The average rainfall each year is 1,800–2,000 mm, but rainfall at Sở Sao crossroads in Bình Dương regularly measures up to 2,113.3 mm.[3][4]

Originally, the area now known as Bình Dương was heavily forested, and was dominated by peoples of the Xtiêng, Chơ Ro, Mnong, and Khmer Krom ethnic groups. In the 17th century, however, ethnic Vietnamese settlers arrived in the region from the east. Most were peasants, seeking to escape poverty by gaining land of their own. There were also a number of refugees from a war between two feudal houses. In 1698, there were enough people in the area that a prominent Vietnamese general was sent to establish official institutions and enforce law. From that point, Bình Dương developed rapidly, with extensive clearance of forests to make room for crops. The province is now dominated by ethnic Vietnamese.

They are further subdivided into 4 commune-level towns (or townlets), 42 communes, and 45 wards. 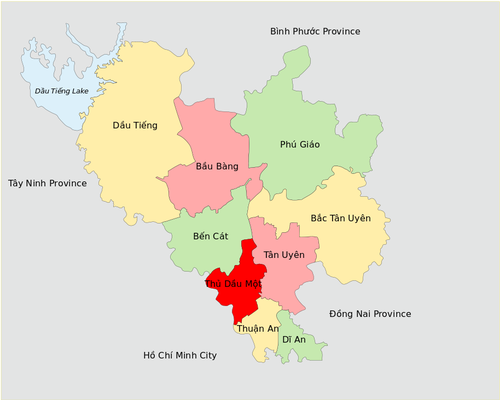 The area is considered to be good cropland, and agriculture is an important industry in the province. Bình Dương is also home to a significant manufacturing industry, and in the first half of 2004, the province had the second highest levels of foreign investment in Vietnam. Nike, Adidas, H&M and McDonald's have set up factories to manufacture goods they sell locally and abroad in the province. The southern Dĩ An and Thuận An wards are highly urbanised and are now encompassed within the Ho Chi Minh City metropolitan area.

Thủ Dầu Một is the economic and administrative center of Bình Dương province. Located in the southern key economic region and the Ho Chi Minh City region, Thủ Dầu Một holds a special position, lying on HCM City's radial arterial road and the HCM City-Thủ Dầu Một-Chơn Thành Expressway. In addition, Thủ Dầu Một is a city with the role of creating links and facilitating Bình Dương's socio-economic and cultural development, and is also the core city of the province, with its satellite cities being the districts’ centres via interprovincial routes. At present, Thủ Dầu Một has been exerting great efforts and has already reached a number of significant outcomes, with the economic structure transforming positively towards increasing the proportion of services and industry. The city has been developing towards civilisation and modernity, whilst focusing on upgrading its technical and social infrastructure and gradually developing itself towards being green, clean, beautiful and smart, enhancing people's living conditions.[7]

Japan is currently the largest foreign investor among 64 countries and territories investing in the southern province of Bình Dương with 304 valid projects worth nearly US$5.7 billion.[8][9] 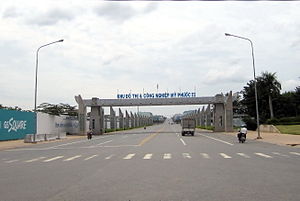 As one of the important elements, the system of cultural institutions has gotten development at the same time as main works in Bình Dương New City. Speeding up investment in cultural institutions in the new city has helped the local residents and tourists to have more selections for their entertainment demand.[11] Over the past 5 years, Bình Dương's tourism sector has reached stable growth with an annual average increase of 17% in revenue and 0.5% in the number of tourists. The Provincial People's Committee is actively implementing projects on ecotourism and traditional craft village tourism development along with Đồng Nai Province to bring into full play and preserve the local historical and cultural features. Between 2016 and 2020, the tourism sector will strive to account for around 27.2% of the local economic structure. The province will focus on effectively tapping geographic advantages. Some tourist potentials include diversifying tourism types and tourism promotion activities and strengthening tourism cooperation with HCM city and other localities in the region. Bình Dương is now home to ecotourism zones, historical-cultural relics together with traditional craft villages on things such as lacquer, pottery and wooden shoes.[12]

According to VOV,[13] eight must-visit places in Bình Dương (mainly in Thủ Dầu Một) are: 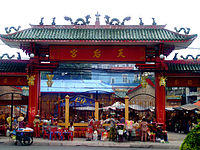 On this occasion, thousands of visitors flocked into Thủ Dầu Một since the 13th of the first lunar month to celebrate the first full moon on the 15th day of the lunar calendar. During this festival, the pagoda attracts thousands of people each day who come to pray for luck, happiness and success. It is common to see people eating vegan food and drinking water. The First Full Moon of the New Year Festival in Bình Dương was more special than in other provinces and Ho Chi Minh City because local businesses and residents give visitors free food, water and motorbike repair services.[14]

There are 10 sister cities/regions of Bình Dương Province:[15]