Avianca Costa Rica, formerly known as LACSA (Spanish: Lineas Aéreas Costarricenses S.A.), minority owned by the Synergy Group, is the national airline of Costa Rica and is based in San José. It operates international scheduled services to over 35 destinations in Central, North and South America.[1][2][3] The airline previously used the TACA/LACSA moniker when it was a subsidiary of Grupo TACA. Since May 2013, following Avianca's purchase of Grupo TACA, Avianca Costa Rica became one of seven nationally branded airlines (Avianca Ecuador, Avianca Honduras, etc.) operated by Avianca Holdings group of Latin American airlines. 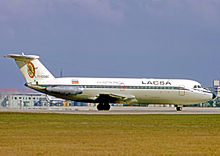 LACSA BAC One-Eleven at Miami in 1971

LACSA was established on 17 October 1945 by Pan American World Airways, the Costa Rican government and Costa Rican private interests. It started operations on 1 June 1946 and was designated the national carrier in 1949. Its domestic network was transferred to its wholly owned subsidiary Sansa in September 1959.

LACSA operated the Douglas DC-6B four-engined piston airliner from 1960 until 1976 on their regular passenger, and eventually freight, scheduled flights to Miami International Airport. The airline introduced the first of their British Aircraft Corporation BAC One-Eleven twin-engined jet airliners onto their Caribbean passenger route network in April 1967.[4]

The airline also operated a subsidiary in the Cayman Islands, Cayman Brac Airways (CBA) Ltd.,[5] which it sold a 51% controlling interest in the late 1960s to the Cayman Islands government which in turn used the air carrier to form Cayman Airways. LACSA served Grand Cayman for many years as an intermediate stop on its services between San José, Costa Rica and Miami.[6]

Beginning 1998, TACA/LACSA was one of the member airlines comprising the TACA Airlines alliance along with Aviateca of Guatemala, Nica of Nicaragua, Isleña of Honduras, and five other regional airlines.[7][8] In 2008, a new fleet of Embraer 190 jets was introduced.[9] Also in 2008 a new TACA logo was introduced,[10] followed by a new fleet of Embraer 190 airplanes registered in Costa Rica and operated under the LACSA code. In 2009, Aerovías del Continente Americano S.A. (Avianca) and TACA announced their merger plans to be completed in 2010. By 2013, the airlines began operating as a single commercial brand using the Avianca name. [11]

According to the May 31, 1973 LACSA system timetable, the airline was serving the following international destinations:[12]

This same timetable states that all international flights were being operated with British Aircraft Corporation BAC One-Eleven twin jets at this time with the exception of the San José-San Andres Island route which was being flown with a Convair 440 propliner.

The airline was operating to such international destinations in 1984 as:

These cities were flown to using Lacsa's Boeing 727 aircraft.[13]

As of July 2020 the Avianca Costa Rica fleet consisted of the following aircraft:[14]