Autumn, also known as fall in North American English,[1] is one of the four temperate seasons. Outside the tropics, autumn marks the transition from summer to winter, in September (Northern Hemisphere) or March (Southern Hemisphere), when the duration of daylight becomes noticeably shorter and the temperature cools considerably. Day length decreases and night length increases as the season progresses until the Winter Solstice (December 21). One of its main features in temperate climates is the shedding of leaves from deciduous trees.

Some cultures regard the autumnal equinox as "mid-autumn", while others with a longer temperature lag treat it as the start of autumn.[2] Meteorologists (and most of the temperate countries in the southern hemisphere)[3] use a definition based on Gregorian calendar months, with autumn being September, October, and November in the northern hemisphere,[4] and March, April, and May in the southern hemisphere. Persians celebrate the beginning of the autumn as Mehregan to honor Mithra (Mehr).

In North America, autumn traditionally starts with the September equinox (21 to 24 September)[5] and ends with the winter solstice (21 or 22 December).[6] Popular culture in the United States associates Labor Day, the first Monday in September, as the end of summer and the start of autumn; certain summer traditions, such as wearing white, are discouraged after that date.[7] As daytime and nighttime temperatures decrease, trees change color and then shed their leaves.[8] In traditional East Asian solar term, autumn starts on or around 8 August and ends on or about 7 November. In Ireland, the autumn months according to the national meteorological service, Met Éireann, are September, October and November.[9] However, according to the Irish Calendar, which is based on ancient Gaelic traditions, autumn lasts throughout the months of August, September and October, or possibly a few days later, depending on tradition. In the Irish language, September is known as Meán Fómhair ("middle of autumn") and October as Deireadh Fómhair ("end of autumn").[10][11]

In southern hemisphere countries such as Australia[12] and New Zealand, which tend to base their seasonal calendars meteorologically rather than astronomically,[13] autumn officially begins on 1 March and ends on 31 May.

Autumnal scene with yellow, orange and red leaves on trees and fallen on the ground

The word autumn /ˈɔːtəm/ is derived from Latin autumnus, archaic auctumnus, possibly from the ancient Etruscan root autu- and has within it connotations of the passing of the year.[14] Alternative etymologies include Proto-Indo-European *h₃ewǵ- (“cold”) or *h₂sows- (“dry”).[15]

After the Roman era, the word continued to be used as the Old French word autompne (automne in modern French) or autumpne in Middle English,[16] and was later normalised to the original Latin. In the Medieval period, there are rare examples of its use as early as the 12th century, but by the 16th century, it was in common use.

Before the 16th century, harvest was the term usually used to refer to the season, as it is common in other West Germanic languages to this day (cf. Dutch herfst, German Herbst and Scots hairst). However, as more people gradually moved from working the land to living in towns, the word harvest lost its reference to the time of year and came to refer only to the actual activity of reaping, and autumn, as well as fall, began to replace it as a reference to the season.[17][18][better source needed]

The alternative word fall for the season traces its origins to old Germanic languages. The exact derivation is unclear, with the Old English fiæll or feallan and the Old Norse fall all being possible candidates. However, these words all have the meaning "to fall from a height" and are clearly derived either from a common root or from each other. The term came to denote the season in 16th-century England, a contraction of Middle English expressions like "fall of the leaf" and "fall of the year".[19][better source needed] Compare the origin of spring from "spring of the leaf" and "spring of the year".[20][better source needed]

During the 17th century, English emigration to the British colonies in North America was at its peak, and the new settlers took the English language with them. While the term fall gradually became nearly obsolete in Britain, it became the more common term in North America.[21]

The name backend, a once common name for the season in Northern England, has today been largely replaced by the name autumn.[22]

Harvest straw bales in a field of Schleswig-Holstein, Germany

Association with the transition from warm to cold weather, and its related status as the season of the primary harvest, has dominated its themes and popular images. In Western cultures, personifications of autumn are usually pretty, well-fed females adorned with fruits, vegetables and grains that ripen at this time. Many cultures feature autumnal harvest festivals, often the most important on their calendars. Still extant echoes of these celebrations are found in the autumn Thanksgiving holiday of the United States and Canada, and the Jewish Sukkot holiday with its roots as a full-moon harvest festival of "tabernacles" (living in outdoor huts around the time of harvest). There are also the many North American Indian festivals tied to harvest of ripe foods gathered in the wild, the Chinese Mid-Autumn or Moon festival, and many others. The predominant mood of these autumnal celebrations is a gladness for the fruits of the earth mixed with a certain melancholy linked to the imminent arrival of harsh weather.

This view is presented in English poet John Keats' poem To Autumn, where he describes the season as a time of bounteous fecundity, a time of 'mellow fruitfulness'.

In North America, while most foods are harvested during the autumn, foods particularly associated with the season include pumpkins (which are integral parts of both Thanksgiving and Halloween) and apples, which are used to make the seasonal beverage apple cider.

Autumn, especially in poetry, has often been associated with melancholia. The possibilities and opportunities of summer are gone, and the chill of winter is on the horizon. Skies turn grey, the amount of usable daylight drops rapidly, and many people turn inward, both physically and mentally.[23] It has been referred to as an unhealthy season.[24]

Similar examples may be found in Irish poet William Butler Yeats' poem The Wild Swans at Coole where the maturing season that the poet observes symbolically represents his own ageing self. Like the natural world that he observes, he too has reached his prime and now must look forward to the inevitability of old age and death. French poet Paul Verlaine's "Chanson d'automne" ("Autumn Song") is likewise characterised by strong, painful feelings of sorrow. Keats' To Autumn, written in September 1819, echoes this sense of melancholic reflection, but also emphasises the lush abundance of the season. The song "Autumn Leaves", based on the French song "Les Feuilles mortes", uses the melancholic atmosphere of the season and the end of summer as a metaphor for the mood of being separated from a loved one.[25] 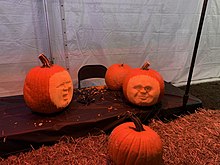 Autumn is associated with Halloween (influenced by Samhain, a Celtic autumn festival),[26] and with it a widespread marketing campaign that promotes it. Halloween, October 31, is in autumn in the northern hemisphere. The television, film, book, costume, home decoration, and confectionery industries use this time of year to promote products closely associated with such a holiday, with promotions going from late August or early September to 31 October, since their themes rapidly lose strength once the holiday ends, and advertising starts concentrating on Christmas. 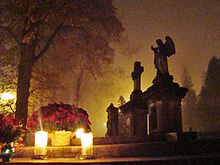 All Saints' Day at a cemetery in Sanok – flowers and lit candles are placed to honor the memory of deceased relatives. Poland, 1 November 2011

In some parts of the northern hemisphere, autumn has a strong association with the end of summer holiday and the start of a new school year, particularly for children in primary and secondary education. "Back to School" advertising and preparations usually occurs in the weeks leading to the beginning of autumn.

Easter falls in autumn in the southern hemisphere.

Thanksgiving Day is a national holiday celebrated in Canada, in the United States, in some of the Caribbean islands and in Liberia. Thanksgiving is celebrated on the second Monday of October in Canada and on the fourth Thursday of November in the United States, and around the same part of the year in other places. Similarly named festival holidays occur in Germany and Japan.

Television stations and networks, particularly in North America, traditionally begin their regular seasons in their autumn, with new series and new episodes of existing series debuting mostly during late September or early October (series that debut outside the fall season are usually known as mid-season replacements). A sweeps period takes place in November to measure Nielsen Ratings.

American football is played almost exclusively in the autumn months; at the high school level, seasons run from late August through early November, with some playoff games and holiday rivalry contests being played as late as Thanksgiving. In many American states, the championship games take place in early December. College football's regular season runs from September through November, while the main professional circuit, the National Football League, plays from September through to early January. Summer sports, such as stock car racing, Canadian football, Major League Soccer, and Major League Baseball, wrap up their seasons in early to late autumn; MLB's championship World Series is known popularly as the "Fall Classic".[27] (Amateur baseball is usually finished by August.) Likewise, professional winter sports, such as ice hockey, basketball, and most leagues of association football in Europe, are in the early stages of their seasons during autumn; American college basketball and college ice hockey play teams outside their athletic conferences during the late autumn before their in-conference schedules begin in winter.

The Christian religious holidays of All Saints' Day and All Souls' Day are observed in autumn in the Northern hemisphere.

In Indian mythology, autumn is considered to be the preferred season for the goddess of learning Saraswati, who is also known by the name of "goddess of autumn" (Sharada).

In Asian mysticism, Autumn is associated with the element of metal, and subsequently with the colour white, the White Tiger of the West, and death and mourning.

Although colour change in leaves occurs wherever deciduous trees are found, coloured autumn foliage is noted in various regions of the world: most of North America, Eastern Asia (including China, Korea, and Japan), Europe, the forest of Patagonia, eastern Australia and New Zealand's South Island.

Eastern Canada and New England are famous for their autumnal foliage,[29][30] and this attracts major tourism (worth billions of US dollars) for the regions.[31][32]

Allegories of autumn in art