Autocracy is a system of government in which supreme political power to direct all the activities of the state is concentrated in the hands of one person, whose decisions are subject to neither external legal restraints nor regularized mechanisms of popular control (except perhaps for the implicit threat of coup d'etat or mass insurrection).[1]

In earlier times, the term autocrat was coined as a favorable feature of the ruler, having some connection to the concept of "lack of conflicts of interests" as well as an indication of grandeur and power. The Russian Emperor was styled "Autocrat of all the Russias" as late as the early 20th century.

Autocracy comes from the Ancient Greek autós ("self") and krátos ("power", "strength") from Kratos, the Greek personification of authority. In the Medieval Greek language, the term Autocrates was used for anyone holding the title emperor, regardless of the actual power of the monarch. Some historical Slavic monarchs such as Russian tsars and emperors included the title Autocrat as part of their official styles, distinguishing them from the constitutional monarchs elsewhere in Europe. This is not to be confused with the use of auto- as in automatic or automobile, to refer to the lack of need for human rule or power at all instead of power by one.

Comparison with other forms of government

Both totalitarian and military dictatorship are often identified with, but need not be, an autocracy. Totalitarianism is a system where the state strives to control every aspect of life and civil society.[2] It can be headed by a supreme leader, making it autocratic, but it can also have a collective leadership such as a commune, military junta, or a single political party as in the case of a one-party state.

In an analysis of militarized disputes between two states, if one of the states involved was an autocracy the chance of violence occurring doubled.[3]

Examples from early modern Europe suggests early statehood was favorable for democracy.[4] According to Jacob Hariri, outside Europe, history shows that early statehood has led to autocracy.[5] The reasons he gives are continuation of the original autocratic rule and absence of "institutional transplantation" or European settlement.[5] This may be because of the country's capacity to fight colonization, or the presence of state infrastructure that Europeans did not need for the creation of new institutions to rule. In all the cases, representative institutions were unable to get introduced in these countries and they sustained their autocratic rule. European colonization was varied and conditional on many factors. Countries which were rich in natural resources had an extractive[?] and indirect rule whereas other colonies saw European settlement.[6] Because of this settlement, these countries possibly experienced setting up of new institutions. Colonization also depended on factor endowments and settler mortality.[5]

Mancur Olson theorizes the development of autocracies as the first transition from anarchy to state. For Olson, anarchy is characterized by a number of "roving bandits" who travel around many different geographic areas extorting wealth from local populations leaving little incentive for populations to invest and produce. As local populations lose the incentive to produce, there is little wealth for either the bandits to steal or the people to use. Olson theorizes autocrats as "stationary bandits" who solve this dilemma by establishing control over a small fiefdom and monopolize the extortion of wealth in the fiefdom in the form of taxes. Once an autocracy is developed, Olson theorizes that both the autocrat and the local population will be better off as the autocrat will have an "encompassing interest" in the maintenance and growth of wealth in the fiefdom. Because violence threatens the creation of rents, the "stationary bandit" has incentives to monopolize violence and to create a peaceful order.[7]

Douglass North, John Joseph Wallis and Barry R. Weingast describe autocracies as limited access orders that arise from this need to monopolize violence. In contrast to Olson, these scholars understand the early state not as a single ruler, but as an organization formed by many actors. They describe the process of autocratic state formation as a bargaining process among individuals with access to violence. For them, these individuals form a dominant coalition that grants each other privileges such as the access to resources. As violence reduces the rents, members of the dominant coalition have incentives to cooperate and to avoid fighting. A limited access to privileges is necessary to avoid competition among the members of the dominant coalition, who then will credibly commit to cooperate and will form the state.[8]

Because autocrats need a power structure to rule, it can be difficult to draw a clear line between historical autocracies and oligarchies. Most historical autocrats depended on their nobles, the military, the priesthood, or other elite groups.[9] Some autocracies are rationalized by assertion of divine right; historically this has mainly been reserved for medieval kingdoms.

It has been argued that authoritarian regimes such as China and Russia and totalitarian states such as North Korea have attempted to export their system of government to other countries through "autocracy promotion".[11] A number of scholars are skeptical that China and Russia have successfully exported authoritarianism abroad.[12][13][14][15] 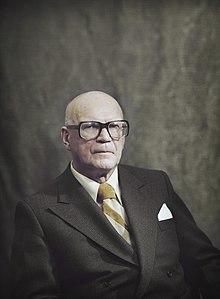 Urho Kekkonen (1900–1986), the 8th President of the Republic of Finland, has been perceived as an autocrat during his more than 25-year presidency (1956–1982),[16][17] with some who viewed him most negatively saying he was the closest Finland's presidents in history to a dictator.[18]