Soldier of the Landwehr-Regiment Nr. 6 in battle dress

The joint "Imperial and Royal Army" (kaiserlich und königliche Armee or k.u.k.) units were generally poorly trained and had very limited access to new equipment because the governments of the Austrian and Hungarian parts of the empire often preferred to generously fund their own units instead of outfitting all three army branches equally. All of the Honvédség and the Landwehr regiments were composed of three battalions, while the joint army k.u.k. regiments had four.

The long-standing white infantry uniforms were replaced in the later half of the 19th century with dark blue tunics,[1] which in turn were replaced by the pike grey M1908 uniform used in the initial stages of World War I. In September 1915, field gray was adopted as the new official uniform colour.[2] As the KuK Army was plagued with supply shortages, when the new Field-gray uniforms were first introduced, remaining stocks of the preexisting Pike-grey uniforms remained in use alongside the newer Feldgrau model.

The last known surviving member of the Austro-Hungarian Army was World War I veteran Franz Künstler, who died in May 2008 at the age of 107.

From the Compromise of 1867 to the World War

The major decisions 1867-1895 were made by Archduke Albrecht, Duke of Teschen, who was the nephew of the Emperor Franz Joseph and his leading advisor in military affairs. According to historians John Keegan and Andrew Wheatcroft:

He was a firm conservative in all matters, military and civil, and took to writing pamphlets lamenting the state of the Army’s morale as well as fighting a fierce rearguard action against all forms of innovation…. Much of the Austrian failure in the First World War can be traced back to his long period of power…. His power was that of the bureaucrat, not the fighting soldier, and his thirty years of command over the peacetime Habsburg Army made it a flabby instrument of war.[3]

Austria-Hungary avoided major wars in the era between 1867 and 1914 but engaged in a number of minor military actions. Nevertheless, the general staff maintained plans for major wars against neighboring powers, especially Italy, Serbia and Russia. By contrast, the main enemies Russia and Serbia had engaged in large scale warfare in the decade before the First World War.[4]

In the late 19th century the army was used to suppress unrest in urban areas of the empire: in 1882 and 1887 in Vienna[5] and notably against German nationalists at Graz and Czech nationalists in Prague in November 1897.[6] Soldiers under the command of Conrad von Hotzendorf were also used against Italian rioters in Trieste in 1902.[7]

The most significant action by soldiers of the Dual Monarchy in this period was the Austro-Hungarian occupation of Bosnia and Herzegovina in the summer of 1878. When troops under the command of Josip Filipović and Stjepan Jovanović entered the provinces expecting little or no resistance, they were met with ferocious opposition from elements of both Muslim and Orthodox populations there. Despite setbacks at Maglaj and Tuzla, Sarajevo was occupied in October. Austro-Hungarian casualties amounted to over 5,000 and the unexpected violence of the campaign led to recriminations between commanders and political leaders.[8]

Size and ethnic and religious composition

In 1868, the number of active-duty troops in the army was 355,000, and the total could be expanded to 800,000 upon mobilization. However, this was significantly less than the European powers of France, the North German Confederation and Russia, each of which could field more than one million men.[9] Though the population of the empire had risen to nearly 50 million by 1900, the size of the army was tied to ceilings established in 1889. Thus, at the start of the 20th century, Austria-Hungary conscripted only 0.29% of its population, compared to 0.47% in Germany, 0.35% in Russia and 0.75% in France.[10] The 1889 army law was not revised until 1912, which allowed for an increase in annual conscriptions.[11]

To aid communication between the multitude of ethnicities, the army developed a simple language called Army Slavic, based primarily on Czech.

From a religious standpoint, the Austro-Hungarian army officer corps was dominated by Roman Catholics. In 1896, out of 1000 officers, 791 were Roman Catholics, 86 Protestants, 84 Jews, 39 Greek-Orthodox, and one Uniate. Of the pre–World War military forces of the major European powers, the Austro-Hungarian army was almost alone in its regular promotion of Jews to positions of command.[13] While the Jewish population of the lands of the Dual Monarchy 4.4% including Bosnia and Herzegovina), Jews made up nearly 18% of the reserve officer corps.[12] There were no official barriers to military service for Jews, but in later years this tolerance eroded to some extent, as important figures such as Conrad von Hötzendorf and Archduke Franz Ferdinand sometimes expressed anti-Jewish sentiments. Franz Ferdinand was also accused (by Conrad) of discriminating against Protestant officers.[14]

Following the 1867 constitutional arrangements, the Reichsrat was dominated by German Liberals, who generally regarded the army as a relic of feudalism. In Budapest, legislators were reluctant to authorize funds for the joint army but were generous with the Hungarian branch of the army, the Honvédség. In 1867 the military budget accounted for about 25% of all government spending, but the economic crash of 1873 hit Austria-Hungary hard and foreign observers questioned whether the Dual Monarchy could manage a major war without subsidies.[15] Despite increases throughout the 1850s and 1860s, in the latter half of the century Austria-Hungary was still spending less on its army than were other major European powers.[15] While the budget continued to rise—from 262 million crowns in 1895 to 306 million in 1906—this was still far less per capita than for other major European states, including Italy, and about on par with Russia, which had a much larger population.[16] Further contributing to the monarchy's military weakness was the low rate of conscription: Austria-Hungary conscripted only 0.29% of its population annually, compared to 0.47% in Germany and 0.75% in France. Attempts to increase the yearly intake of recruits were proposed but repeatedly blocked by officials in Budapest until an agreement was reached in 1912.[10]

In the emerging field of military aviation, Austria-Hungary lagged behind other European states. While balloon detachments had been established in 1893, they were mostly assigned to the fortress artillery, except for a brief period from 1909 to 1911 when they were under command of the multifaceted Verkehrs Brigade.[17] Realization that heavier-than-air machines were necessary or useful came late, and Austria-Hungary acquired only five airplanes by 1911. In 1914 the budget for military aviation was approximately ​1⁄25th the amount spent by France. Austria-Hungary entered the war with only 48 first-line aircraft.[17]

Austria-Hungary had a complex military structure. The country had three main distinct ground forces. As a union the Monarchy had a common government of three ministers (Minister of the Imperial Household and Foreign Affairs; Minister of War and Minister of Finance). The Imperial Minister of War had authority over the Common Army, the Navy, and, shortly before and during WWI, the newly established independent Air Troops.

The Common Army was the premier land force. It was the best equipped and had the main role to secure the borders of the Monarchy. In case of war it was to absorb the Austrian Landwehr and the Hungarian Honvéd within its command structure. For that reason the Common Army was organised in army corps even in peacetime, while the Landwehr and Honvéd were organised in territorial districts. The provinces of Bosnia and Herzegovina were governed as a condominium between the Austrian and the Hungarian parts of the dual monarchy. As such the local troops of Bosnian Riflemen were subordinated through the Governor of Bosnia and Herzegovina to the Imperial Minister of War. The general peacetime order of battle of the Common Army included:

The Austrian part of the monarchy (officially called Kingdoms and Lands Represented in the Imperial Council, unofficially and for short Cisleithania) had its own government. It included the Imperial and Royal Ministry of National Defence (completely independent from the Imperial War Ministry). In peacetime it had complete authority and responsibility for the Imperial-Royal Landwehr and its:

The Hungarian part of the monarchy (officially called Lands of the Crown of Saint Stephen, unofficially and for short Transleithania) also had its own government. One of its ministries was the Royal Hungarian Honvéd Ministry (also completely independent from the Imperial War Ministry). In peacetime it had complete authority and responsibility for the: 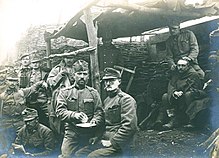 Austro-Hungarian soldiers resting in a trench 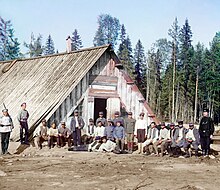 Official designations were as follows:

After war was declared, 3.35 million men (including the first call-up of the reserves and the 1914 recruits) gathered for action.

The Austro-Hungarian Imperial Army was officially under the control of the Commander-in-Chief, Emperor Franz Josef. By 1914, however, Franz Josef was 84 years old and the chief of staff, Count Franz Conrad von Hötzendorf, effectively had more power over the armed forces. Conrad favored an aggressive foreign policy and advocated the use of military action to solve Austria-Hungary's territorial disputes with Italy and Serbia.[19]

Archduke Friedrich, Duke of Teschen was appointed Supreme Commander of the Austro-Hungarian army by Franz Joseph on July 11, 1914. It was thought he would not interfere with the operational and tactical plans of Conrad von Hötzendorf. Friedrich remained Supreme Commander until February 1917, when Emperor Charles I decided to assume the office himself. 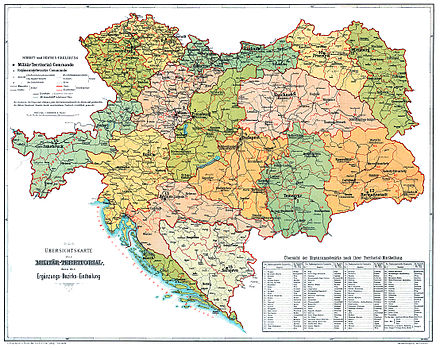 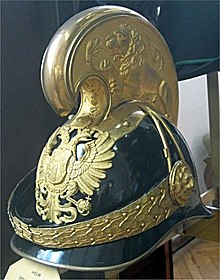 The Imperial-Royal Landwehr (k.k. or kaiserlich österreichisch/königlich böhmisch) was the standing army of Austria responsible for the defence of Austria itself.

The mountain infantry had the following units: 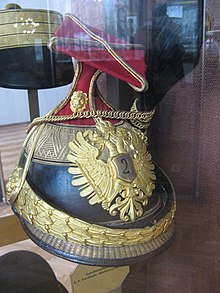 The Royal Hungarian Landwehr (königlich ungarische Landwehr) or Royal Hungarian Honvéd (k.u. Honvéd) was the standing army of Hungary. A part of the Honvéd was the Royal Croatian Landwehr (Kraljevsko hrvatsko domobranstvo), which consisted of 1 infantry division (out of 7 in Honvéd) and 1 cavalry regiment (out of 10 in the Honvéd).

In 1915 units that had nicknames or names of honour lost them by order of the War Ministry. Thereafter units were designated only by number. For instance, the k.u.k. Infanterie-Regiment (Hoch und Deutschmeister) Nr. 4 became Infanterie-Regiment No. 4 (4th Infantry Regiment).

The Standschützen (singular: Standesschütze[A. 1]) were originally rifle guilds and rifle companies that had been formed in the 15th and 16th centuries, and were involved time and again in military operations within the borders of the Austrian County of Tyrol. A Standschütze was a member of a Schützenstand ("shooting club"), into which he was enrolled,[A. 2] which automatically committed him to the voluntary, military protection of the state of Tyrol (and Vorarlberg). In effect they were a type of Tyrolean local militia or home guard. 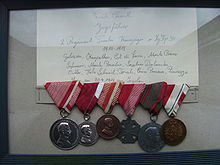 The following were the medals awarded to a Zugsführer (Staff-Sergeant) of the 2nd Regiment of the Tyrolian Imperial Rifles (later transferred to the 30th High Mountain Company), who saw action at:

He received the following decorations:

The triangular folded style of ribbon seen on medals of the Austro-Hungarian Army could be seen with armies of former territories or successor states of Austria-Hungary, including the Royal Hungarian Army and the Croatian Home Guard (World War II).

Ranks and rank insignia of the Austro-Hungarian Army 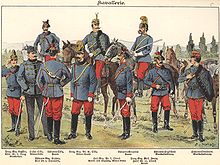 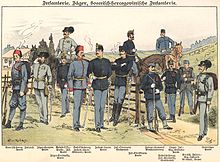 Please note, that the first name is always in German.

The ranks displayed after the "/" are the Hungarian and Croatian equivalents of the Austrian ranks, since they were used in this format in the Magyar Királyi Honvédség / königlich ungarische Landwehr (Royal Hungarian Home Defence Forces) as well as in the Kraljevsko Hrvatsko Domobranstvo / königlich kroatische Landwehr (Royal Croatian Home Guard).

The English equivalents are from the Austrian Bundesheer's homepage.