Austrian cuisine is a style of cuisine native to Austria and composed of influences from Central Europe and throughout the former Austro-Hungarian Empire.[1] Austrian cuisine is most often associated with Viennese cuisine, but there are significant regional variations. 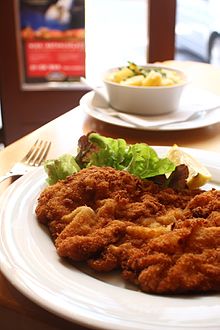 Wiener Schnitzel, a traditional Austrian dish made with boneless meat thinned with a mallet (escalope-style preparation), and fried with a coating of flour, egg, and breadcrumbs

Breakfast is of the "continental" type, usually consisting of bread rolls with either jam or cold meats and cheese, accompanied by coffee, tea or juice. The midday meal was traditionally the main meal of the day, but in modern times as Austrians work longer hours further from home this is no longer the case. The main meal is now often taken in the evening.

A mid-morning or mid-afternoon snack of a slice of bread topped with cheese or ham is referred to as a Jause; a more substantial version akin to a British "ploughman's lunch" is called a Brettljause after the wooden board on which it is traditionally served. 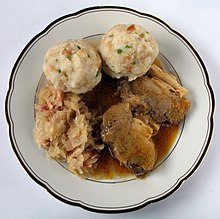 The most popular meats in Austria are beef, pork, chicken, turkey and goose. The prominent Wiener Schnitzel is traditionally made of veal. Pork in particular is used extensively, with many dishes using offal and parts such as the snout and trotters.

Austrian butchers use a number of special cuts of meat, including Tafelspitz (beef), and Fledermaus (pork). Fledermaus (German for "bat") is a cut of pork from the ham bone that resembles the winged animal. It is described as "very juicy, somewhat fatty, and crossed by tendons"; the latter fact makes it suitable for steaming, braising or frying after tenderization in a marinade.[4]

Austrian cuisine has many different sausages, like Frankfurter, Krainer Wurst from Carniola (Krain), Debreziner (originating from Debrecen in Hungary), or Burenwurst, Blunzn made out of pig-blood and Grüne Würstl—green sausages. Green means raw in this context—the sausages are air dried and are consumed boiled. Bacon in Austria is called Speck, bacon can be smoked, raw, salted, spiced, etc. Bacon is used in many traditional recipes as a salty spice. Leberkäse is a loaf of corned beef, pork and bacon—it contains neither liver nor cheese despite the name. Vanillerostbraten is a garlicky beef dish.

Austria has an old hunting tradition since there are many woods across the country. In the autumn season many restaurants in Austria traditionally offer game on their menu along with seasonal vegetables and fruits like pumpkins from Styria. Usual game are:

The German names of game animals followed by -braten signifies a dish of roast game: Hirschbraten is roast venison.

The original Sachertorte, as served at Vienna's Hotel Sacher

Austrian cakes and pastries are a well-known feature of its cuisine. Perhaps the most famous is the Sachertorte, a chocolate cake with apricot jam filling, traditionally eaten with whipped cream. Among the cakes with the longest tradition is the Linzer torte. Other favourites include the caramel-flavoured Dobostorte and the delicately layered Esterhazy Torte, named in honour of Prince Esterházy (both originating from Hungary during the Austro-Hungarian empire), as well as a number of cakes made with fresh fruit and cream. Punschkrapfen is a classical Austrian pastry, a cake filled with cake crumbs, nougat chocolate, apricot jam and then soaked with rum. Tirolerkuchen is a hazelnut and chocolate coffee cake.

These cakes are typically complex and difficult to make. They can be eaten at a café or bought by the slice from a bakery. A "Konditorei" is a specialist cake-maker, and the designations "Café-Konditorei" and "Bäckerei-Konditorei" are common indicators that the café or bakery in question specialises in this field.

Austrian desserts are usually slightly less complicated than the elaborate cakes described above. The most famous of these is the Apfelstrudel (apple strudel), layers of thin pastry surrounding a filling of apple, usually with cinnamon and raisins. Other strudels are also popular, such as those filled with sweetened curd cheese called Topfen, sour cherry (Weichselstrudel), sweet cherry and poppy seed strudel (Mohnstrudel).

Another favourite is Kaiserschmarr'n, a rich fluffy sweet thick pancake made with raisins and other fruits, broken into pieces and served with a fruit compote (traditionally made of plums called Zwetschkenröster) for dipping, while a speciality of Salzburg is the meringue-like "Salzburger Nocken". The Danish pastry is said to originate from Vienna and in Denmark is called wienerbrød (Viennese bread). The Danish pastry uses a dough in the classic cuisine referred to as "Viennese Dough", made of thin layers of butter and flour dough, imported to Denmark by Austrian bakers hired during a strike among the workers in Danish bakeries in 1850.[5] 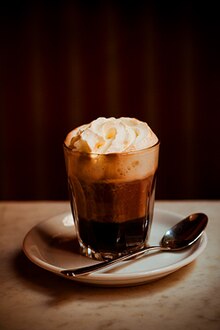 An Einspänner is classically served in a glass

Austria is credited in popular legend with introducing coffee to Europe after bags of coffee beans were left behind by the retreating Turkish army after the Battle of Vienna in 1683. Although the first coffeehouses had appeared in Europe some years earlier, the Viennese café tradition became an important part of the city's identity.

Coffee is served in a variety of styles, particularly in the Viennese cafés. An Austrian Mokka or kleiner Schwarzer is similar to espresso, but is extracted more slowly. Other styles are prepared from the Mokka:

Italian styles such as cappuccino, espresso and caffè latte are also commonly served.

Traditionally, coffee is served with a glass of still water.

Drinking coffee together is an important social activity in Austrian culture. It is quite common for Austrians to invite friends or neighbours over for coffee and cake. This routine activity can be compared to the British afternoon tea tradition. It is also very common to go to a coffeehouse while dating.

Almdudler is an Austrian soft drink based on mountain herbs and with a flavour reminiscent of elderflower beverages. It is considered the "national drink of Austria", and is popularly used as a mixer with white wine or water. While Red Bull is popular all across the West, the energy drink company started in Austria. The headquarters of the Red Bull company are located at Fuschl near Salzburg.

Beer is generally sold in the following sizes: 0.2 litre (a Pfiff), 0.33 litre (a Seidel, kleines Bier or Glas Bier) and 0.5 litre (a Krügerl or großes Bier or Hoibe). At festivals one litre Maß and two litre Doppelmaß in the Bavarian style are also sometimes dispensed. The most popular types of beer are pale lager (known as Märzen in Austria), naturally cloudy Zwicklbier, and wheat beer. At holidays like Christmas and Easter bock beer is also available.

Austrian beers are typically in the pale lager style, with the exceptions noted above. A dark amber "Vienna Style" lager was pioneered in the city during the 19th century but is no longer common there.

Wine is principally cultivated in the east of Austria. The most important wine-producing areas are in Lower Austria, Burgenland, Styria, and Vienna. The Grüner Veltliner grape provides some of Austria's most notable white wines; Zweigelt is the most widely planted red wine grape. Southern Burgenland is a region that mainly grows red grapes; the "Seewinkel" area, east of the Neusiedler See in Burgenland's north, has more mixed wine cultures and is famous for its sweet wines. Wine is even grown within the city limits of Vienna – the only European capital where this is true – and some is even produced under the auspices of the city council.

Young wine (i.e., wine produced from grapes of the most recent harvest whose alcoholic fermentation is not finished yet and is not separated yet from his yeast) is called Heuriger and gives its name to inns in Vienna and its surroundings, which serve Heuriger wine along with food. In Styria, Carinthia and Burgenland, the Heuriger inns are known as Buschenschanken.

In Upper Austria, Burgenland, Lower Austria, Styria and Carinthia, Most, the fresh juice of grapes or apples is produced, while Sturm ("storm"), a semi-fermented grape juice is drunk after the grape harvest. Most and Sturm are pre-stages of wine.

At the close of a meal, sometimes schnaps (fruit brandy), typically of up to 60% alcohol, is drunk. In Austria schnaps is made from a variety of fruits, for example apricots, rowanberries, gentian roots, various herbs and even flowers. The produce of small private schnaps distilleries, of which there are around 20,000 in Austria, is known as Selberbrennter or Hausbrand. 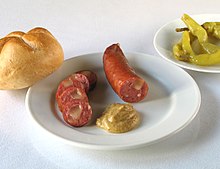 A Käsekrainer Sausage with a Kaiser roll and mustard

For food consumed in between meals there are many types of open sandwiches called "belegte Brote", or different kinds of sausage with mustard, ketchup and bread, as well as sliced sausage, Leberkäse rolls or Schnitzelsemmeln (rolls filled with schnitzel).

Open sandwiches in Vienna, with a Pfiff-size beer

Traditionally you can get a Wurstsemmel (a roll filled, usually, with Extrawurst, a special kind of thinly sliced sausage, often with a slice of cheese and a pickle or cornichon) at a butcher or at the delicatessen counter in a supermarket.

There are also other common yet informal delicacies that are typical of Austrian food. For example, the Bosna or Bosner (a spiced bratwurst in a hot dog roll), which is an integral part of the menu at Austria's typical fast-food joint, the sausage stand (Würstelstand). Most Austrian sausages contain pork.

In Lower Austria, local delicacies such as Waldviertel poppies, Marchfeld asparagus and Wachau apricots are cultivated. Famous are the "Marillenknödel": small dumplings filled with apricots and warm butter-fried breadcrumbs on it. Their influence can be felt in the local cuisine, for example in poppy seed noodles "Mohnnudeln". Game dishes are very common. Lower Austria is striking for the differences within its regional cuisine due to its size and the variety of its landscape.

Burgenland's cuisine has been influenced by Hungarian cuisine owing to its former position within the Hungarian part of the Austro-Hungarian Empire. Dishes consist mainly of fish, chicken or pork. Potatoes are the most common side dish, for example, crushed potatoes with onions called "Greste Krumpian" (= Geröstete Kartoffeln, which comes from "geröstet", meaning "roasted", and the Hungarian term "krumpli" for potatoes). Because of Hungarian influence, Burgenlandish dishes are often spicier than elsewhere in Austria, often indicated with the terms "Zigeuner..." ("Gypsy") or "Serbisch..." ("Serbian"). Polenta is a popular side-dish within Burgenland's Croatian minority. On St Martin's Day (November 11) a Martinigans (St Martin's goose) is often prepared, and carp is a typical Christmas dish.

In Styrian Buschenschanken (seasonal wine taverns), Verhackertes (a spread made from finely chopped raw bacon) is served. Schilcher, a very dry rosé, is the regional style of wine in West Styria. A typically Styrian delicacy is pumpkin seed oil, which lends itself particularly to salads on account of its nutty taste. Many varieties of pumpkin dish are also very popular. Heidensterz, resembling a dry, almost crumbly version of grits made from buckwheat flour, is a local dish enjoyed in cold weather. Especially in autumn, game dishes are very common.[6]

Various types of dumplings are an important part of Upper Austrian cuisine, as they are in neighbouring Bavaria and Bohemia. Linzer Torte, a cake that includes ground almonds or nuts and redcurrant jam, is a popular dessert from the city of Linz, the capital of Upper Austria. Linzeraugen are fine, soft biscuits filled with redcurrant jam called Ribiselmarmelade, which has a sharp flavour.

Tyrolean bacon and all sorts of dumplings including Speckknödel (dumplings with pieces of bacon) and Spinatknödel (made of spinach) are an important part of the local cuisine. Tyrolean cuisine is very simple because in earlier times Tyroleans were not very rich, farming on mountains and in valleys in the middle of the Alpine Region. Tyrolean food often contains milk, cheese, flour and lard.

The cuisine of Vorarlberg has been influenced by the Alemannic cuisine of neighbouring Switzerland and Swabia. Cheese and cheese products play a major role in the cuisine, with Käsknöpfle and Kässpätzle (egg noodles prepared with cheese) being popular dishes. Other delicacies include Krutspätzle (sauerkraut noodles), Käsdönnala (similar to a quiche), Schupfnudla (made from a dough mixing potato and flour), Frittatensuppe (pancake soup), Öpfelküachle (apple cake) and Funkaküachle (cake traditionally eaten on the first Sunday of Lent).