The Australian Open is a tennis tournament held annually over the last fortnight of January at Melbourne Park in Melbourne, Australia. The tournament is the first of the four Grand Slam tennis events held each year, preceding the French Open, Wimbledon, and the US Open. It features men's and women's singles; men's, women's, and mixed doubles; junior's championships; and wheelchair, legends, and exhibition events. Prior to 1988 it was played on grass courts, but since then three types of hardcourt surfaces have been used; green coloured Rebound Ace up to 2007, blue Plexicushion from 2008 to 2019, and blue GreenSet since 2020.[1][2]

First held in 1905 as the Australasian championships, the Australian Open has grown to become one of the biggest sporting events in the Southern Hemisphere.[3] Nicknamed "the happy slam"[4] and often referred to as the "Grand Slam of Asia/Pacific"[5][6] the tournament is the highest attended Grand Slam event, with more than 812,000 people attending the 2020 tournament. It was also the first Grand Slam tournament to feature indoor play during wet weather or extreme heat with its three primary courts, Rod Laver Arena, Melbourne Arena and the refurbished Margaret Court Arena equipped with retractable roofs.

The Australian Open is managed by Tennis Australia, formerly the Lawn Tennis Association of Australia (LTAA), and was first played at the Warehouseman's Cricket Ground in Melbourne in November 1905. This facility is now known as the Albert Reserve Tennis Centre and was a grass court.[7]

The new facilities at Melbourne Park (formerly Flinders Park) were envisaged to meet the demands of a tournament that had outgrown Kooyong's capacity. The move to Melbourne Park was an immediate success, with a 90 per cent increase in attendance in 1988 (266,436) on the previous year at Kooyong (140,000).[10]

Because of Australia's geographic remoteness, very few foreign players entered this tournament in the early 20th century. In the 1920s, the trip by ship from Europe to Australia took about 45 days. The first tennis players who came by boats were the US Davis Cup players in November 1946.[10] Even inside the country, many players could not travel easily. When the tournament was held in Perth, no one from Victoria or New South Wales crossed by train, a distance of about 3,000 kilometres (1,900 mi) between the East and West coasts. In Christchurch in 1906, of a small field of 10 players, only two Australians attended and the tournament was won by a New Zealander.[11]

Margaret Court Arena at the Australian Open with the old Rebound Ace surface. Rod Laver Arena, the centre court, in the background

The first tournaments of the Australasian Championships suffered from the competition of the other Australasian tournaments. Before 1905, all Australian states and New Zealand had their own championships, the first organised in 1880 in Melbourne and called the Championship of the Colony of Victoria (later the Championship of Victoria).[12] In those years, the best two players – Australian Norman Brookes (whose name is now written on the men's singles cup) and New Zealander Anthony Wilding – almost did not play this tournament. Brookes took part once and won in 1911, and Wilding entered and won the competition twice (1906 and 1909). Their meetings in the Victorian Championships (or at Wimbledon) helped to determine the best Australasian players. Even when the Australasian Championships were held in Hastings, New Zealand, in 1912, Wilding, though three times Wimbledon champion, did not come back to his home country. It was a recurring problem for all players of the era. Brookes went to Europe only three times, where he reached the Wimbledon Challenge Round once and then won Wimbledon twice. Thus, many players had never played the Austral(as)ian amateur or open championships: the Doherty brothers, William Larned, Maurice McLoughlin, Beals Wright, Bill Johnston, Bill Tilden, René Lacoste, Henri Cochet, Bobby Riggs, Jack Kramer, Ted Schroeder, Pancho Gonzales, Budge Patty, and others, while Brookes, Ellsworth Vines, Jaroslav Drobný, came just once. Even in the 1960s and 1970s, when travel was less difficult, leading players such as Manuel Santana, Jan Kodeš, Manuel Orantes, Ilie Năstase (who only came once, when 35 years old) and Björn Borg came rarely or not at all. 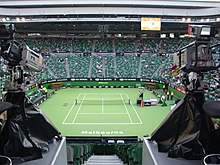 Inside Rod Laver Arena prior to an evening session in 2007

Beginning in 1969, when the first Australian Open was held on the Milton Courts at Brisbane, the tournament was open to all players, including professionals who were not allowed to play the traditional circuit.[13] Nevertheless, except for the 1969 and 1971 tournaments, many of the best players missed this championship until 1982, because of the remoteness, the inconvenient dates (around Christmas and New Year's Day) and the low prize money. In 1970, George MacCall's National Tennis League, which employed Rod Laver, Ken Rosewall, Andrés Gimeno, Pancho Gonzales, Roy Emerson and Fred Stolle, prevented its players from entering the tournament because the guarantees were insufficient. The tournament was won by Arthur Ashe.[14]

In 1983, Ivan Lendl, John McEnroe and Mats Wilander entered the tournament. Wilander won the singles title[15] and both his Davis Cup singles rubbers in the Swedish loss to Australia at Kooyong shortly after.[16] Following the 1983 Australian Open, the International Tennis Federation prompted the Lawn Tennis Association of Australia to change the site of the tournament, because the Kooyong stadium was then inappropriate to serve such a big event. In 1988 the tournament was first held at Flinders Park (later renamed Melbourne Park).[17] The change of the venue also led to a change of the court surface from grass to a hard court surface known as Rebound Ace.[18] Mats Wilander was the only player to win the tournament on both grass and hard courts. In 2008, after being used for 20 years, the Rebound Ace was replaced by a cushioned, medium-paced,[19] acrylic surface known as Plexicushion Prestige. Roger Federer and Serena Williams are the only players to win the Australian Open on both Rebound Ace and Plexicushion Prestige. The main benefits of the new surface are better consistency and less retention of heat because of a thinner top layer.[18] This change was accompanied by changes in the surfaces of all lead-up tournaments to the Australian Open. The change was controversial because of the new surface's similarity to DecoTurf, the surface used by the US Open.[20]

Rafael Nadal vs Philipp Kohlschreiber at the 2010 Australian Open

Before the Melbourne Park stadium era, tournament dates fluctuated as well, in particular in the early years because of the climate of each site or exceptional events. For example, the 1919 tournament was held in January 1920 (the 1920 tournament was played in March) and the 1923 tournament in Brisbane took place in August when the weather was not too hot and wet. After a first 1977 tournament was held in December 1976 – January 1977, the organisers chose to move the next tournament forward a few days, then a second 1977 tournament was played (ended on 31 December), but this failed to attract the best players. From 1982 to 1985, the tournament was played in mid-December. Then it was decided to move the next tournament to mid-January (January 1987), which meant there was no tournament in 1986. Since 1987, the Australian Open date has not changed. However, some top players, including Roger Federer and Rafael Nadal, have said that the tournament is held too soon after the Christmas and New Year holidays, thus preventing players from reaching their best form, and expressed a desire to shift it to February.[21] Such a change, however, would move the tournament outside the summer school holiday period, potentially impacting attendance figures.

In 2008 New South Wales authorities made clear their desire to bid for hosting rights to the tournament once Melbourne's contract expired in 2016.[22] The proposal met a scathing response from Wayne Kayler-Thomson, the head of the Victorian Events Industry Council, who labelled it "disappointing that NSW cannot be original and seek their own events instead of trying to cannibalise other Australian cities."[23] The prospect of moving the tournament is unlikely as over the following years the Melbourne Park precinct was upgraded with enhanced facilities for players and spectators. Notably a retractable roof was placed over Margaret Court Arena, making the Open the first of the four Grand Slams to have retractable roofs available on three of their show courts.[24] The player and administrative facilities, as well as access points for spectators, were improved and the tournament site expanded its footprint out of Melbourne Park into nearby Birrarung Marr.[25] A fourth major show court, seating 5,000 people is expected to be completed in the coming years.[26]

In December 2018, tournament organisers announced the Australian Open would follow the examples set by Wimbledon and the US Open and introduce tie-breaks in the final sets of men's and women's singles matches. Unlike Wimbledon and the US Open, which initiate conventional tie-breaks at 12-12 games and 6-6 games respectively, the Australian Open utilises a first to 10 points breaker at 6 games all.[27]

In 2019, the tournament organisers decided to replace the official court manufacturer for GreenSet retaining the iconic blue cushioned acrylic hardcourt. Its use started in 2020.[28]

From 1973 to 2018, the Seven Network served as the host broadcaster of the Australian Open. In March 2018, it was announced that the Nine Network had acquired the rights to the tournament beginning in 2020, for a period of five years. The network later bought the rights for the 2019 tournament as well.[29] The Open's broadcast rights are lucrative in the country, as it occurs near the end of the Summer non-ratings season — which gives its broadcaster opportunities to promote their upcoming programming lineup.[30][31]

In Europe the tournament is broadcast on Eurosport. Other broadcasters in the region have included the BBC in the United Kingdom, SRG in Switzerland, NOS in Netherlands and RTS in Serbia. In the United Kingdom, the BBC dropped its live coverage of the 2016 tournament just a month before the start due to budget cuts, leaving Eurosport as the exclusive live broadcaster.[citation needed]

Panorama of Rod Laver Arena during the 2020 Australian Open

The following record of attendance begins in 1987, when the tournament moved from being held in December to in January (the immediate preceding tournament was December 1985). 1987 was the last year that the Kooyong Tennis Club hosted the tournament; since 1988 it has been held at Melbourne Park. The average growth rate over the period covered below is more than 7%.

The names of the tournament winners are inscribed on the perpetual trophy cups.

Ranking points for the men (ATP) and women (WTA) have varied at the Australian Open through the years but presently players receive the following points:

The Australian Open is played at Melbourne Park, which is located in the Melbourne Sports and Entertainment Precinct; the event moved to this site in 1988. Currently three of the courts have retractable roofs, allowing play to continue during rain and extreme heat. As of 2017, spectators can also observe play at Show Courts 2 and 3, which have capacities of 3,000 each,[67] as well as at Courts 4–15, 19 and 20 with the aid of temporary seating grandstands of capacity anywhere from 50 to 2,500.[68]

Between 2008 and 2019, all of the courts used during the Australian Open were hard courts with Plexicushion acrylic surfaces (though Melbourne Park does have eight practice clay courts these are not used for the tournament). This replaced the Rebound Ace surface used from the opening of Melbourne Park. The ITF rated the surface's speed as medium.[70] In 2020, the courts were switched to GreenSet, though retained their distinctive blue appearance.

Unlike the other three Grand Slam tournaments, which became open in 1968, the Australian tournament opened to professionals in 1969. Thus, the records here break at the 1969 tournament. Citations for these records.[76]