Location of Aurora within the Regional Municipality of York.

Aurora (2016 population 55,445[2]) is a town in central York Region in the Greater Toronto Area, within the Golden Horseshoe of Southern Ontario, Canada. It is located north of the City of Richmond Hill and is partially situated on the Oak Ridges Moraine. In the Canada 2016 Census, the municipal population of Aurora was the 95th largest in Canada, compared to 97th for the 2006 Census. Aurora has been ranked in the top 10 wealthiest towns in Canada.[3][4]

Lieutenant-Governor John Graves Simcoe gave the order for Yonge Street to be extended to Holland Landing in 1793, the first step toward the establishment of a community where Aurora now stands. Yonge Street opened between 1794 and 1796. In 1795, the first house in Aurora was built at Yonge St and Catherine Av.[5] The government began granting deeds to land in 1797. By 1801 there were fourteen homes.[6]

In 1804, Richard Machell became the first merchant at the crossroads of Yonge and Wellington and the hamlet soon became known as Machell's Corners. Charles Doan was another early businessman at Machell's Corners and became the first postmaster and later the first reeve. The post office was originally known as "Whitchurch".[7]:10 As postmaster, he was influential in renaming the village Aurora, after the goddess Aurora from Roman mythology.[7]:10[a] Machell proposed to rename the town "Match-Ville", ostensibly for the match factory in the town, but the name Aurora was more popular and ultimately chosen as the town's name.[7]:12 Flour and grist mills were built around 1827. With the coming of the railway in 1853, Aurora emerged as an important centre north of Toronto. The Fleury plough works foundry opened in 1859, making agricultural implements.[8]

The settlement was incorporated as a village in 1863 with Charles Doan as the first reeve. Records from 1885 describe Aurora as the "largest village in the county" an "enterprising and stirring business community" with several factories and mills, five churches, a school house with 210 students, and two weekly newspapers. The population in 1881 was 1540.[11][12] The population reached 2,107 by 1888.

Aurora was the childhood home of Lester B. Pearson, Prime Minister of Canada from 1963 to 1968, when his father, Rev. Edwin Pearson, was the Methodist minister.[7]:40

Aurora is noted for preserving its historical built form and in 2008 was awarded The Prince of Wales Prize for Municipal Heritage Leadership.[13] In 2009 the town received the Lieutenant Governor's Ontario Heritage Award for Community Leadership in heritage conservation and promotion.[14] Northeast Old Aurora was designated in 2006 as a provincial Heritage Conservation District.[15]

On April 8, 2010, the town re-opened the historic and fully renovated Church Street School as the Aurora Cultural Centre.

Aurora is twinned with Leksand, Sweden.[16]

Aurora is situated just north of the Oak Ridges Moraine and borders Newmarket in the north, Richmond Hill in the south, King City in the west and Whitchurch–Stouffville in the east.

The Town of Aurora municipal government is composed of a mayor and six councillors elected on an "at large" basis. The councillor with the highest votes becomes the deputy mayor and may proxy for the mayor. The mayor is a member of York Regional Council. In the municipal elections of 2018, Tom Mrakas was elected mayor. The town is part of the federal riding of Newmarket—Aurora. The riding is represented in the House of Commons of Canada by Kyle Peterson, a member of the Liberal Party of Canada, who was first elected in the 2015 federal election. Aurora is also part of the provincial riding of Newmarket—Aurora. The member of Provincial Parliament is Christine Elliott, who was elected in the 2018 Ontario general election. Elliot belongs to the Progressive Conservative Party of Ontario.

Public health services are managed by York Region. There is no hospital within Aurora's boundaries; the nearest is Southlake Regional Health Centre in Newmarket.

Aurora is served by schools from three publicly funded school boards: the York Region District School Board (the English Public Board), the York Catholic District School Board (the English Catholic Board), and Conseil scolaire de district catholique Centre-Sud (the French-language Catholic Board). The Conseil scolaire Viamonde (the secular French-language board) also has Aurora in its territory.

Aurora residents have access to a wide range of other educational facilities including daycares and nurseries. The Aurora Public Library is a public library funded and operated by the town.

A largely undeveloped portion of Aurora is subject to the Ontario Government's Greenbelt legislation which enforces limits on growth in designated Green Belt locations. In Aurora, this affects mostly the south-eastern areas of the town.

Growth is occurring in the north-eastern locations, particularly in the form of high-density residential homes and townhouses along Bayview Ave and north of Wellington St. E. (also known as "Aurora Rd."), and commerce along Wellington St. E. on Aurora's eastern border between Leslie St. and Hwy. 404.

One other area of growth will be via intensification along the Yonge and Wellington Street corridors. As part of the town's Official Plan review, a sub-committee of Council developed a plan in 2010, called the Aurora Promenade, that sets out new and redevelopment for the coming years.[22] More than 30 public meetings, open-houses and workshops were held to create the plan. It is anticipated that 2,930 additional residents will live along the Yonge and Wellington Street corridors, close to new major transportation systems being implemented by Viva. The study was expected to stimulate new and redevelopment along both corridors in the coming years and to reinvigorate the downtown core.

The Aurora Public Library is located in the northeast corner of the intersection of Yonge Street and Church Street. A library was first established in Aurora in 1855, and was moved to the current location in 2001. The library is open all days of the week, but closed on Sundays between May 17 and September 11, and between December 20 and January 2. 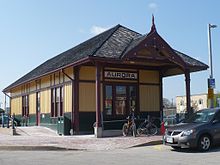 Major roads running through Aurora include Bathurst Street at its western border, Yonge Street, Bayview Avenue, Leslie Street, and Highway 404 at its eastern border and Bloomington Road at the southern border. Wellington Street is the town's major east-west road, with the Yonge-Wellington area having the busiest traffic volume in Aurora. St John's Sideroad is the northernmost main road in the town, located about 100 metres from its northern border.

The Town of Aurora is serviced by York Region Transit (YRT), including several local routes as well as its Viva Blue Bus Rapid Transit service.[23]

The Aurora GO Station is a stop on GO Transit's Barrie Line. Trains depart approximately every 15–30 minutes southbound towards Toronto during weekday morning peak periods, and northbound towards Barrie approximately every 30 minutes during the afternoon peak. On evenings, weekends, holidays, as well as during the weekday midday period, trains operate approximately every hour between Aurora and Toronto with GO Bus connections at Aurora to and from Barrie.[24] Under the GO Transit Regional Express Rail plan, by a target date of 2024 service will be increased to run every 15 minutes during peak, midday, evenings, and weekends between Aurora and Toronto using electric trains rather than the current diesel trains, and every along the full route between Barrie and Toronto every 30 minutes during peak and every 60 minutes off-peak.[25]

Local media include Metroland-owned The Banner (formerly the Era Banner) and The Auroran (a member of the Simcoe York Group of Newspapers) newspapers and Aurora programming provided by Rogers Cable (formerly Aurora Cable Internet).

Radio stations from Toronto are typically available, as in the nearby towns of Newmarket, south into Richmond Hill and Bradford.

Aurora has a long history of theatre, with its own community theatre group, Theatre Aurora. Founded in 1958 as the Aurora Drama Workshop, the group joined with the Aurora Musical Society in 1973 to form Theatre Aurora. The next year the group moved into its current home at the Factory Theatre on Henderson Drive. The group has performed a wide variety of shows, and currently produces five shows each year, along with two youth shows.[27]

The auto parts giant Magna International, founded by Frank Stronach, is based in Aurora

TC Transcontinental has a printing plant for magazines in Aurora, formerly operated by Quebecor World and Quad/Graphics.

The Aurora armoury is a recognized Federal Heritage building, listed in 1991 on the Register of the Government of Canada Heritage Buildings.[28]

Aurora is also home to Hillary House and Koffler Museum of Medicine. Hillary House is recognized by the National Historic Sites and Monuments Board as one of Canada's best examples of Gothic Revival architecture.[29]

Aurora FC is a semi-professional soccer team that plays in League1 Ontario in both the men's and women's divisions. It is also a youth soccer club.[30] 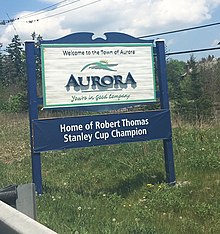