Augustin Pyramus (or Pyrame) de Candolle (UK: /kænˈdɒl/,[1] US: /kɒ̃ˈdɔːl/,[2] French: [kɑ̃dɔl]; 4 February 1778 – 9 September 1841) was a Swiss botanist. René Louiche Desfontaines launched de Candolle's botanical career by recommending him at an herbarium. Within a couple of years de Candolle had established a new genus, and he went on to document hundreds of plant families and create a new natural plant classification system. Although de Candolle's main focus was botany, he also contributed to related fields such as phytogeography, agronomy, paleontology, medical botany, and economic botany.

De Candolle originated the idea of "Nature's war", which influenced Charles Darwin and the principle of natural selection.[3] de Candolle recognized that multiple species may develop similar characteristics that did not appear in a common evolutionary ancestor; a phenomenon now known as convergent evolution. During his work with plants, de Candolle noticed that plant leaf movements follow a near-24-hour cycle in constant light, suggesting that an internal biological clock exists. Though many scientists doubted de Candolle's findings, experiments over a century later demonstrated that ″the internal biological clock″ indeed exists.

Augustin Pyramus de Candolle was born on 4 February 1778 in Geneva, Switzerland, to Augustin de Candolle, a former official, and his wife, Louise Eléonore Brière. His family descended from one of the ancient families of Provence in France, but relocated to Geneva at the end of the 16th century to escape religious persecution.[4]

At age seven de Candolle contracted of a severe case of hydrocephalus, which significantly affected his childhood.[5] Nevertheless, he is said to have had great aptitude for learning, distinguishing himself in school with his rapid acquisition of knowledge in classical and general literature and his ability to write fine poetry. In 1794, he began his scientific studies at the Collège de Genève, where he studied under Jean Pierre Étienne Vaucher, who later inspired de Candolle to make botanical science the chief pursuit of his life.[4]

He spent four years at the Geneva Academy, studying science and law according to his father's wishes. In 1798, he moved to Paris after Geneva had been annexed to the French Republic. His botanical career formally began with the help of René Louiche Desfontaines, who recommended de Candolle for work in the herbarium of Charles Louis L'Héritier de Brutelle during the summer of 1798.[6] The position elevated de Candolle's reputation and also led to valuable instruction from Desfontaines himself.[6] de Candolle established his first genus, Senebiera, in 1799.[6]

De Candolle's first books, Plantarum historia succulentarum (4 vols., 1799) and Astragalogia (1802), brought him to the notice of Georges Cuvier and Jean-Baptiste Lamarck. de Candolle, with Cuvier's approval, acted as deputy at the Collège de France in 1802. Lamarck entrusted him with the publication of the third edition of the Flore française (1805–1815),[a][4][8] and in the introduction entitled Principes élémentaires de botanique, de Candolle proposed a natural method of plant classification as opposed to the artificial Linnaean method.[9][4] The premise of de Candolle's method is that taxa do not fall along a linear scale; they are discrete, not continuous.[10] Lamarck had originally published this work in 1778, with a second edition in 1795. The third edition, which bears the name of both Lamarck and de Candolle, was in reality the work of the latter, the former having only lent his name and access to his collection.[11]

In 1804, de Candolle published his Essai sur les propriétés médicales des plantes and was granted a doctor of medicine degree by the medical faculty of Paris. Two years later, he published Synopsis plantarum in flora Gallica descriptarum. de Candolle then spent the next six summers making a botanical and agricultural survey of France at the request of the French government, which was published in 1813. In 1807 he was appointed professor of botany in the medical faculty of the University of Montpellier, where he would later become the first chair of botany in 1810. His teaching at the University of Montpellier consisted of field classes attended by 200–300 students, starting at 5:00 am and finishing at 7:00 pm.[12] While in Montpellier, de Candolle published his Théorie élémentaire de la botanique (Elementary Theory of Botany, 1813),[4] which introduced a new classification system and the word taxonomy.[13] Candolle moved back to Geneva in 1816 and in the following year was invited by the government of the Canton of Geneva to fill the newly created chair of natural history.[4] 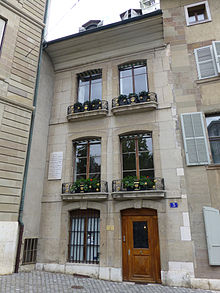 De Candolle spent the rest of his life in an attempt to elaborate and complete his natural system of botanical classification. de Candolle published initial work in his Regni vegetabillis systema naturale, but after two volumes he realized he could not complete the project on such a large scale. Consequently, he began his less extensive Prodromus Systematis Naturalis Regni Vegetabilis in 1824. However, he was able to finish only seven volumes, or two-thirds of the whole.[4] Even so, he was able to characterize over one hundred families of plants, helping to lay the empirical basis of general botany.[14] Although de Candolle's main focus was botany, throughout his career he also dabbled in fields related to botany, such as phytogeography, agronomy, paleontology, medical botany, and economic botany.[15]

In 1827 he was elected an associated member of the Royal Institute of the Netherlands.[16]

In 2017, a book[20] was written in French about his life and one of his greatest contributions, the Botanical Garden of Geneva.

He is remembered in the plant genera Candollea and Candolleodendron,[21] several plant species like Eugenia candolleana or Diospyros candolleana and the mushroom Psathyrella candolleana.[22] Candollea, a scientific journal that publishes papers on systematic botany and phylotaxonomy,[23] was named after de Candolle and his descendants in honor of their contribution to the field of botany.[18] He was a mentor to the French-Mexican botanist Jean-Louis Berlandier and is credited with encouraging Marie-Anne Libert to investigate cryptogamic flora.[24]

de Candolle also had the unexpected distinction of triggering the adoption of pre-paid postage in the Canton and City of Geneva, in a long address which he gave to the governing council in 1843. This led to them issuing Switzerland's second postage stamp, the famous Double Geneva later in that year [25] (see also postage stamps and postal history of Switzerland).

De Candolle was the first to put forward the idea of "Nature's war",[3] writing of plants being "at war one with another" with the meaning of different species fighting each other for space and resources.[26] Charles Darwin studied de Candolle's "natural system" of classification in 1826 when at the University of Edinburgh,[27] and in the inception of Darwin's theory in 1838 he considered "the warring of the species", adding that it was even more strongly conveyed by Thomas Malthus, producing the pressures that Darwin later called natural selection.[26] In 1839 de Candolle visited Britain and Darwin invited him to dinner, allowing the two scientists the opportunity to discuss the idea.[3]

De Candolle was also among the first to recognize the difference between the morphological and physiological characteristics of organs. He ascribed plant morphology as being related to the number of organs and their positions relative to each other rather than to their various physiological properties. Consequently, this made him the first to attempt to attribute specific reasons for structural and numerical relationships amongst organs, and thus to distinguish between major and minor aspects of plant symmetry.[14] To account for modifications of symmetry in parts of different plants, an occurrence that could hinder the discovery of an evolutionary relationship, de Candolle introduced the concept of homology.[28]

De Candolle also made contributions to the field of chronobiology. Building upon earlier work on plant circadian leaf movements contributed by such scientists as Jean-Jacques d'Ortous de Mairan and Henri-Louis Duhamel du Monceau, de Candolle observed in 1832 that the plant Mimosa pudica had a free-running period of leaf opening and closing of approximately 22–23 hours in constant light, significantly less than the approximate 24-hour period of the Earth's light-dark cycles.[29][30] Since the period was shorter than 24 hours, he hypothesized that a different clock had to be responsible for the rhythm; the shortened period was not entrained—coordinated—by environmental cues, thus the clock appeared to be endogenous.[31] Despite these findings, a number of scientists continued to search for "factor X", an unknown exogenous factor associated with the earth's rotation that was driving circadian oscillations in the absence of a light dark schedule, until the mid-twentieth century.[32] In the mid-1920s, Erwin Bunning repeated Candolle's findings and came to similar conclusions, and studies that showed the persistence of circadian rhythm in the South Pole and in a space lab further confirmed the existence of oscillations in the absence of environmental cues.[32]

The standard author abbreviation DC. is used to indicate this person as the author when citing a botanical name.[33]