Wayback Machine Auckland CBD Chancellor (education)
Not to be confused with University of Auckland. 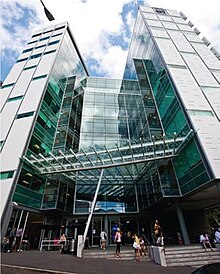 AUT was founded as Auckland Technical School in 1895, offering evening classes only. Daytime classes began in 1906 and its name was changed to Auckland Technical College. In 1913 it was renamed Seddon Memorial Technical College. In the early 1960s educational reforms resulted in the separation of secondary and tertiary teaching; two educational establishments were formed; the tertiary (polytechnic) adopting the name Auckland Technical Institute (ATI) in 1963 and the secondary school continuing with the same name. For three years they co-existed on the same site, but by 1964 the secondary school had moved to a new site in Western Springs and eventually became Western Springs College. In 1989 ATI became Auckland Institute of Technology (AIT), and the current name was adopted when university status was granted in 2000.[6]

Sir Paul Reeves served as university chancellor from 2005 until his death in 2011.[7]

City Campus spreads over several sites in the heart of central Auckland. The largest site is situated on Wellesley Street East and is home to most of the academic units and central administration, including the Vice-Chancellor's Office and research centres. The Faculties of Business, Economics and Law, Design and Creative Technologies, Culture and Society and Te Ara Poutama share this location.

AUT has recently completed a number of buildings, including the new WZ building designed to house the engineering, computer science and mathematics students under one roof. The first 8 levels of the 12-storey $120 million building opened in July 2018 to coincide with the start of the second academic semester. The building itself was designed to be a teaching tool, with structural components visible, ceilings left exposed for viewing and the building management systems being visible on screens for analysis by students. Sustainability was also a goal, with rain water being collected for use in the labs, occupancy sensors in the rooms to ensure that areas are not being unnecessarily lit and solar fins on the outside of the building to regulate heat from the sun and ease load on the air-conditioning system.[10]

Another recent building completion is the $98 million WG precinct. Named after the former Chancellor of the university, the Sir Paul Reeves Building hosts the School of Communication Studies. The 12-storey building was officially opened by Prime Minister John Key on 22 March 2013. It provides an additional learning space of about 20,000 square metres that consists of convention spaces, screen and television studios and a motion capture, sound and performance studio.[11]

In 2016, the University invested significantly in the construction of the Mana Hauora (MH) Building. Construction of MH was completed in December 2016, and was officially opened by Prime Minister Bill English in March 2017.[13] As the largest building on campus, MH is now the new heart of the campus and incorporates a number of sustainability design features. In 2017, three awards were given in recognition of the new MH Building at the New Zealand Institute of Architects (NZIA) Auckland Regional Awards.[14]

In July, 2019, controversy arose when AUT cancelled an event commemorating the Tiananmen Square massacre, and allegations arose that this was due to interference from the Government of China, due to contact between Chinese officials and the university.[15] AUT denied that China had pressured them,[16] although this claim has been heavily disputed, including by some university staff.[17]

North Campus is located on Akoranga Drive in Northcote. The Faculty of Health and Environmental Sciences (including the Sport and Recreation division) and School of Education share this campus, which has park-like grounds. AUT's main sport and fitness centre is located at the campus, encompassing a gymnasium, weights room, testing equipment, golf swing clinic, and indoor courts. The campus also offers a library, student services centre, early childhood centre, AuSM branch, PrintSprint shop, health counselling and wellbeing centre, university bookshop, and food outlets. In addition, the campus provides five health clinics (oral, physiotherapy, podiatry, psychotherapy, and ultrasound), which are now located at the NorthMed Health Clinic building at 3 Akoranga Drive, Northcote (since July 2017).[18] North Campus is closely linked with the nearby AUT Millennium Institute of Sport and Health.[19]

AUT maintains a number of facilities off campus, including the AUT Radio Telescope, New Zealand's first radio telescope. The 12m telescope is located near Warkworth and is part of New Zealand's and Australia's involvement in the international mega-science project, the Square Kilometre Array.[22] The AUT/New Zealand Alliance won the 'Highly Commended' award in the Innovation Excellence in Research category at the 2016 New Zealand Innovation Awards.[4]

AUT's Centre for Refugee Education, located in Mangere, provides an on-arrival six-week education programme for the 1,000 refugees who come to New Zealand each year under the government quota scheme.[23] The education programme teaches English language skills at early childhood, primary, secondary and adult levels, as well as orientation to life in New Zealand. With a new set of learners arriving every two months, and with ages ranging from early childhood to adult, the teaching team has developed a curriculum that gives refugees English and life skills, but remains flexible in order to tailor the lessons to each new intake.[4]

AUT has five faculties. These are:

AUT has 17 schools that sit within these faculties. These are:

The AUT Business School has been recognised as one of the top business schools in the world by the Association to Advance Collegiate Schools of Business (AACSB) International.[24]

As a relatively new university, AUT came in eighth place in the 2006 Performance-Based Research Fund (PBRF) round, but has shown the greatest improvement in PBRF rating of New Zealand's eight universities.

Research partnerships and exchanges have been established with some of the world's leading universities. AUT's growing research profile has seen an increase in research programme enrolments and external funding, as well as research institutions.[25]

The University opened new research centres and institutes in 2016, bringing the total number to more than 60, covering a wide range of disciplines. In 2016, AUT's quality-assured research outputs increased by 9% to more than 2000 outputs, including publication in leading international journals.[4]:23

The New Zealand Tourism Research Institute (NZTRI), brings together local and international experts in tourism and hospitality.[26] It was established in 1999 by Professor Simon Milne, and is located in the School of Hospitality and Tourism. In 2010 the institute brought together 19 researchers as well as 15 PhD students, several other graduate students being linked to the Institute in more informal ways.

NZTRI conducts research projects around the world and has developed strong links with Huế University in Vietnam, Wageningen University in the Netherlands, University of Akureyri in Iceland, McGill University and York University in Canada among others. Its research programme areas include coastal and marine tourism, community development, cultural heritage tourism, event tourism, health and wellness tourism, hospitality research, indigenous tourism, Pacific Islands tourism, tourism marketing, and tourism technology. The institute has a team of research officers, international interns and other allied staff.[27][28]

The Pacific Media Centre (PMC) is located within the School of Communication Studies. It was founded in 2007 to develop media and journalism research in New Zealand, particularly involving Māori, Pacific Islands, ethnic and vernacular media topics.[29] It is recognised as a diversity project by the Human Rights Commission (New Zealand),[30] and has been featured by the Panos London Media Development programme for its development communication work.[31]

The centre publishes Asia-Pacific journalism, and has published Pacific Scoop since 2009.[32][33] It also publishes media and communication studies books, like the 2009 book Communication, Culture and Society in Papua New Guinea: Yo Tok Wanem?, in collaboration with other publishers or overseas universities.[34][35] The center was featured as a Creative Commons case study in 2010.[36] Founding director David Robie, a New Zealand author, journalist and media academic, won a Vice Chancellor's Award in 2011 for excellence in university teaching.[37][38]

Pacific Media Watch is PMC's daily independent Asia-Pacific media monitoring service and research project.[39][40][41] The site was launched in Sydney in October 1996,[42] and has links with the University of the South Pacific,[43] the University of PNG (UPNG) and the Australian Centre for Independent Journalism (ACIJ).[44] Since moving to AUT in 2007, it has become a digital repository[45] and received a grant from the Pacific Development and Conservation Trust in 2010 to "expand its educational and research role for the Pacific region".[46][47] PMW has established a Pactok server archive,[48] and added a D-Space archive in 2010.[49][50][51] Representatives of Pacific Media Watch report on the region's news developments, provide advocacy for media freedom,[52] and published a media freedom report on the South Pacific in 2011.[53][54][55]

PMC has also published 'Pacific Journalism Review', a peer-reviewed research journal on media issues and communication in the South Pacific and Australia, since 2002.[56] The journal was previously published at the University of Papua New Guinea from 1994 to 1999. The editorial policy focuses on the cultural politics of the media, including new media and social movements, the culture of indigenous peoples, the politics of tourism and development, the role of the media and the formation of national identity. It also covers environmental and development studies in the media and communication, and vernacular media in the region. In October 2010, PJR was awarded the "Creative Stimulus Award" for academic journals in the inaugural Academy Awards of the Global Creative Industries in Beijing, China.[57] The journal has advocated free speech and freedom of information in the Asia-Pacific region.[58]

Within these research institutes exist a large number of research centres and units. The NIPHMHR administers the Pacific Islands Families Study.[60]

AUT now features amongst the world's elite institutions in 11 subjects, featuring in the QS World University Rankings for:[64]

AUT is the first and only tertiary provider in New Zealand to be awarded the Rainbow Tick,[65] which attests to the University's work to ensure inclusiveness for the LGBTQI community, and in positively responding to issues of gender diversity.[66]

Vesbar at the AUT Wellesley campus

AuSM (Auckland Student Movement) is the students' association at AUT. Every student attending a course run by AUT University is a member of AuSM, and its primary function is to promote and maintain the rights and welfare of students. It provides advocacy and support, assignment binding, student diary and wall planner, Student Job Search, discounted phone cards, and food bank.[69] The AuSM Advocacy Team provide advice to students with academic grievances, grade appeals, harassment, or tenancy issues.

The AuSM Student Representative Council is composed of a President, a Vice President, and Māori Affairs, Pasifika, Diversity, International, Disability and Postgraduate Officers. There are Business and Law, Design and Creative Technologies, Health and Environmental Sciences, Culture and Society and Te Ara Poutama Faculty Representatives. There are also City Campus, North Campus and South Campus Representatives. AuSM representatives sit on various committees, focus groups and boards to speak out on behalf of 24,000 AuSM members. Former presidents include April Pokino (2014–2015), Kizito Essuman (2012–2013), Veronica Ng Lam (2010–2011), Andre D'cruz (2009), and Jan Herman (2007–2008). The 2018 president is Dharyin Colbert[70] (in 2017 it was Urshula Ansell).[71]

AuSM supports more than 40 affiliated clubs, and organises concerts, comedy shows, live DJs, dance parties, the annual Orientation Festival and other events. AuSM sponsored the AUT Titans at the Australian University Games in 2009, winning gold in netball and touch rugby. The AuSM lodge is based in Tongariro National Park, accommodates up to 12 people and is available to AuSM members from $160 per night for up to 12 people.[73] Campus venue Vesbar is owned and operated by AuSM for its students, and operates throughout the year.[74]