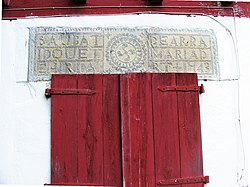 Atalburu (from Basque atari 'doorway' buru 'head') is the name given to the lintel above the main entrance of traditional Basque houses.

It was usual for each new house, particularly in the province of Lower Navarre, to engrave on these stones:

The text may have religious references, for example:

Traditionally, all Basque houses have a name, but this was seldom written on the atalarri and more commonly found on the armarria. On modern houses, the house name is frequently engraved on a stele near the door. Once a house is named, the name is virtually never changed.