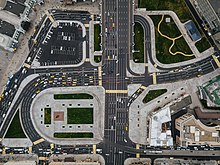 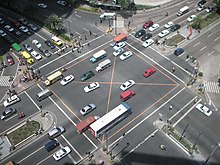 The intersection between Ayala Avenue and Makati Avenue in Makati City, the Philippines

An intersection is an at-grade junction where two or more roads or streets meet or cross. Intersections may be classified by number of road segments, traffic controls or lane design. In general, there are two types of intersections including signalized and unsignalized intersections.[1]

One way to classify intersections is by the number of road segments (arms) that are involved. 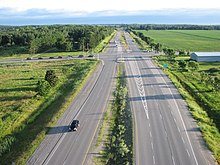 Intersection along the Veterans Memorial Parkway, an at-grade limited-access road in London, Ontario.

Another way of classifying intersections is by traffic control technology:

At intersections, turns are usually allowed, but are often regulated to avoid interference with other traffic. Certain turns may be not allowed or may be limited by regulatory signs or signals, particularly those that cross oncoming traffic. Alternative designs often attempt to reduce or eliminate such potential conflicts.

At intersections with large proportions of turning traffic, turn lanes (also known as turn bays)[3] may be provided. For example, in the intersection shown in the diagram,[clarification needed] left turn lanes are present in the right-left street.

Turn lanes are marked with an arrow bending into the direction of the turn which is to be made from that lane. Multi-headed arrows indicate that vehicle drivers may travel in any one of the directions pointed to by an arrow.

Traffic signals facing vehicles in turn lanes often have arrow-shaped indications. Green arrows indicate protected turn phases, when vehicles may turn unhindered by oncoming traffic. Red arrows may be displayed to prohibit turns in that direction. Red arrows may be displayed along with a circular green indication to show that turns in the direction of the arrow are prohibited, but other movements are allowed. In some jurisdictions, a red arrow prohibits a turn on red.[6]

Disadvantages to turn lanes include increased pavement area, with associated increases in construction and maintenance costs, as well as increased amounts of stormwater runoff. They also increase the distance over which pedestrians crossing the street are exposed to vehicle traffic. If a turn lane has a separate signal phase, it often increases the delay experienced by oncoming through traffic. Without a separate phase, left crossing traffic does not get the full safety benefit of the turn lane. 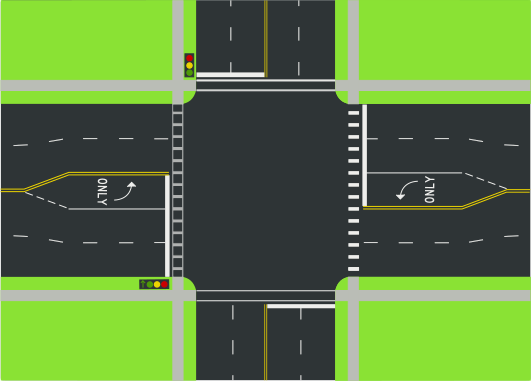 Diagram of an example intersection of two-way streets as seen from above (traffic flows on the right side of the road). The east-west street has left turn lanes from both directions, but the north-south street does not have left turn lanes at this intersection. The east-west street traffic lights also have green left turn arrows to show when unhindered left turns can be made. Some possible markings for crosswalks are shown as examples.

Times Square is the hub of the Broadway theater district and a major cultural venue in Midtown Manhattan, New York City. The pedestrian intersection also has one of the highest annual attendance rates of any tourist attraction in the world, estimated at 60 million.[9]

Intersections generally must manage pedestrian as well as vehicle traffic. Pedestrian aids include crosswalks, pedestrian-directed traffic signals ("walk light") and over/underpasses. Traffic signals can be time consuming to navigate, especially if programmed to prioritise vehicle flow over pedestrians, while over and underpasses which rely on stairs are inaccessible to those who can't climb them. Walk lights may be accompanied by audio signals to aid the visually impaired. Medians can offer pedestrian islands, allowing pedestrians to divide their crossings into a separate segment for each traffic direction, possibly with a separate signal for each.

Some intersections display red lights in all directions for a period of time. Known as a pedestrian scramble, this type of vehicle all-way stop allows pedestrians to cross safely in any direction, including diagonally. All green for non motorists is known from the crossing at Shibuya Station, Tokyo.[10]

Poor visibility at junctions can lead to drivers colliding with cyclists and motorcyclists. Some junctions use advanced stop lines which allow cyclists to filter to the front of a traffic queue which makes them more visible to drivers.

A European study found that in Germany and Denmark, the most important crash scenario involving vulnerable road users was:

In the case of railways or rail tracks the term at grade applies to a rail line that is not on an embankment nor in an open cut. As such, it crosses streets and roads without going under or over them. This requires level crossings. At-grade railways may run along the median of a highway. The opposite is grade-separated. There may be overpasses or underpasses.