Asian people[28] or Asiatic people[29] are people who descend from a portion of Asia's population.

A variety of definitions and geographical data are presented by organizations and individuals for classifying the ethnic groups in Asia.

In parts of anglophone Africa, especially East Africa and in parts of the Caribbean, the term "Asian" is more commonly associated with people of South Asian origin, particularly Indians, Pakistanis, Bangladeshis and Sri Lankans.[30] In South Africa the term Asian is used in the pan-continental sense. Due to the high number of Indians in South Africa, in official documentation the designation "Indian" is used to refer to both South- and East-Asians.[31][better source needed]

Arab States of the Persian Gulf

In the Arab states of the Persian Gulf, the term "Asian" generally refers to people of South Asian and Southeast Asian descent due to the large Indian, Pakistani, Bangladeshi and Filipino expatriate population in these countries.[32][33][34] However, there are instances where the term is used solely to refer to those of South Asian descent.[35]

The Canadian Census uses the term 'Asian' pan-continentally. In its presentation of the "ethnic origin" results of the 2016 census, Statistics Canada under the category "Asian origins" includes: West Central Asian and Middle Eastern (includes "Arab, not otherwise specified"), South Asian, East and Southeast Asian, and "other" Asian origins.[37]

Statistics Norway uses the term 'Asian' pan-continentally and considers people of Asian background to be people from all Asian countries.[40][41]

Statistics Sweden uses the term 'Asian' to refer to immigrants of Asian background from all Asian countries, including the Middle East.[42][43]

In the United Kingdom, the term "Asian" is more commonly associated with people of South Asian origin, particularly Indians, Pakistanis, Bangladeshis and Sri Lankans.[30][44] The UK usage of the term "Asian" is reflected in the "ethnic group" section of UK census forms, which treat "Asian" and "Chinese" as separate (see British Asian).[45] Most respondents to the UK 2001 Census of non-Chinese East Asian and Southeast Asian descent chose to write-in their ethnicity in the "Other Ethnic Group" category rather than the "Other Asian" category, reflecting the association of the word Asian in the UK with South Asian.[46] Despite there being a strong presence of East Asians in the United Kingdom there are considerably more South Asians, for example the 2001 Census recorded 1.05 million people of Indian origin and 247,000 of Chinese origin in the UK.[47] Peter J. Aspinall of the Centre for Health Services Studies, University of Kent, recommends privileging the term "South Asian" over the term "Asian", since the term "Asian" is a "contested term".[44] 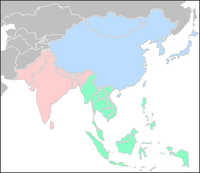 Asian ancestries as defined by the 2000 U.S. Census.

In 1968, an Asian activist conference decided on favoring the name "Asian American" over the competing terms—"yellow", "Mongoloid", "Asiatic", and "Oriental"—since the Filipinos at the meeting thought they were "brown" rather than "yellow" and the conference thought the term "Oriental" was Eurocentric, since they originate from lands "east" only from Europe's standpoint and, since the term "Oriental" suggested to them "passivity".[48]

Earlier Census forms from 1980 and prior listed particular Asian ancestries as separate groups along with White and Black or Negro.[49] Previously, Asian Americans were classified as "other".[50] But the 1980 Census marked the first general analyses of Asians as a group, combining several individual ancestry groups into "Asian or Pacific Islander." By the 1990 Census, Asian or Pacific Islander (API) was included as an explicit category, although respondents had to select one particular ancestry.[51][52][53]

The 2000 and 2010 U.S. Census Bureau definition of the Asian race is: "people having origins in any of the original peoples of the Far East, Southeast Asia, or the Indian subcontinent (for example, Cambodia, China, India, Indonesia, Japan, Korea, Malaysia, Pakistan, the Philippine Islands, Thailand, and Vietnam)".[54]

Sandra S. Lee et al. (2001) said, in regards to the categories of the 2000 US Census, that it is difficult to determine why Asian Americans are a "race" while Latino and Hispanic are an "ethnic group." Lee said, referring to the Hispanic or Latino category, that the category of Asian Americans, quite similarly, comprises different populations of diverse origins. Lee said that people of South Asian origin were categorically identified as "Hindu," regardless of their religion, in the early 20th century. Lee said that the policy changed to classify people from the Indian subcontinent as "white." Lee said that, more recently, South Asian Americans were added to the long list of groups that comprise the category of Asian American. Referring to their classification as "Asian," Lee said that, in the United States, the classification of people from the Indian subcontinent depends on their historical location.[55]

In 1930 and 1940, Indian Americans were identified as a separate race, Hindu, and in 1950 and 1960 they were racially classified as Other Race, and then in 1970 they were classified as White. Since 1980, Indians and all other South Asians have been classified as part of the Asian ethnic group.[56] Sociologist Madhulika Khandelwal described how "....as a result of activism, South Asians came to be included as 'Asians' in the census only in the 80's. Prior to that many South Asians had been checking 'Caucasian' or 'Other'."[57]

Edward J. Imwinkelried (1982), Professor of Law at Washington University, said that the "Mongoloid (including Asiatics and Indians)" is one of the groups into which the hair analyst can categorize hair.[62]

Norman J. Sauer (1992), of the Department of Anthropology at Michigan State University, said that, in forensic anthropology, modern race identification studies have to do with some combination of the "Big Three": the "White", the "Black," and the "Asiatic," with the Asiatic including American Indians.[63]

Luigi Luca Cavalli-Sforza (1994) referred to both "Asian Caucasoids" and "Mongoloids" in Asia which he also called "other Asians" as encompassing "Asian populations". Cavalli-Sforza also referred to "Amerinds" as being the "aboriginal Asian group" of the Americas.[64]

Leonard Lieberman (1997), professor of anthropology at Central Michigan University, said that, in the United States, the stereotype of three distinctive races, the Caucasoid, Negroid, and Mongoloid races, comprising the whole world, was based on immigrants from Northwest Europe, West Africa, and Southeast China. Lieberman said that not all Asians can be designated as "Mongoloid."[65][66]

Matt Cartmill (1999), of the Department of Biological Anthropology and Anatomy, Duke University, said "geography has little to do with the race concept in its actual application", since "Asian individuals [can be] born in the same geographical region" as other races.[67]

Michael Bamshad et al. (2004), of the Department of Human Genetics, University of Utah, found that "107 sub-Saharan African, 67 East Asian and 81 Western European" individuals genetically clustered with "ancestry from a single population" at levels of "almost 100%", but among "263 individuals from South India" the "proportion of ancestry shared with Europeans and Asians varies widely".[68]

A writing style guide published in 2011 by two professors at universities in the United States of America recommends using the term "Asian" to refer to people living in Asian countries such as "China, Japan, Korea, Vietnam, etc." unless a given situation makes using a more specific nationality term more appropriate than using the broader term "Asian".[73]

Willett Enos Rotzell (1900), professor of Botany and Zoology at the Hahnemann Medical College, used the term "Asian" for a race, which he alternatively called the "Yellow or Mongolian race".[74]

Mehmet Yaşar İşcan (1988), of the Department of Anthropology at Florida Atlantic University, said, "Unfortunately, anthropologists who advocate the adoption of 'new' terminology cause a great deal of confusion by trying to replace 'Mongoloid' with 'Asian,' completely ignoring the fact that at least 30% of the inhabitants of Asia (Indians, Iranians, Turks, etc., as well as the 'prototype Caucasians' themselves) are Caucasoid!"[75]

Marta Mirazón Lahr (1995), of the Department of Biological Anthropology at Cambridge University, said "all" "Asian populations" are "grouped under the name Mongoloid".[76]

Karen T. Taylor (2001), forensic art professor at the FBI Academy, said that the term "Asian-derived" is a modern-day euphemism for the "Mongoloid race" and it includes "Native Americans" and "various Asian groups".[77]

Eugénia Maria Guedes Pinto Antunes da Cunha (2006), of the Department of Anthropology, University of Coimbra, said there has been a modern trend in "most of the forensic anthropology literature" to "rename" the term "Mongoloid", a term in which she includes the "North American Indian", with the term "Asian" or "Asiatic". Da Cunha said that, even though the "terminology" has changed, the "underlying assumptions are the same".[78]

Jun Kyung-ran et al. (2007), of the Department of Laboratory Medicine, University of Ulsan, used the term "Asian populations" for the group he also referred to as the "Asian-Mongoloid" in which he included Japanese, Korean, Chinese and Thai for a meta-analysis of alleles in relation to rheumatoid arthritis.[79]

A 2009 book about forensic anthropology said that the "leading handbook in human osteology" has kept on using the "traditional terms"' of "caucasoid, mongoloid, negroid", but "one of the most popular recent forensic anthropology textbooks" has changed to the "more current, politically correct terminology of Asian, white, black, Native American".[80]

Clyde H. Ishii (2014), in an academic journal about plastic surgery, said, "Although many countries use the term 'Asian' referring to people living on that continent, in reality, Asian usually refers to peoples of East, Southeast, and South Asia. Inhabitants of Southwest Asia, such as Arabs and Iranians, are more commonly designated Middle Easterners.3 The term Asian as used in this article refers to people from Asia who have a Mongoloid background (Chinese, Japanese, Koreans, Vietnamese, Filipinos, Indonesians, and others)."[81]