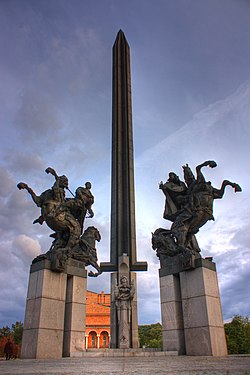 The Asen dynasty (Bulgarian: Асеневци, Asenevtsi) founded and ruled a medieval Bulgarian state, called in modern historiography the Second Bulgarian Empire, between 1185 and 1280.

The Asen dynasty rose as the leaders of Bulgaria after a rebellion against the Byzantine Empire at the turn of the year 1185/1186 caused by the increase in the Imperial taxes.

Some members of the Asen family entered Byzantine service in the thirteenth to fourteenth centuries. The name also occurs as a family name in modern Greek, and could go back to the same name. 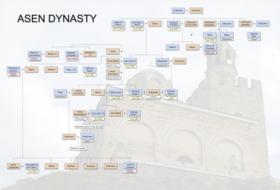 Genealogy of the Asen dynasty

The origins of the dynasty, especially the ethnic background of the three Asen brothers (Teodor I Peter IV, Ivan Asen I and Kaloyan) are still a source of much controversy, debated among historians. There are three main hypothesis regarding their origins:[1]

In their own administrative documents and correspondence, the three rulers viewed themselves as descendants and successors of the Bulgarian Tsars Samuil, Peter I and Simeon I, and the state they founded as a continuation of the First Bulgarian Empire. However, this could be just a way to proclaim their legitimacy for the throne of the Empire.

In a correspondence, of 1199, the Pope talks about the "Roman descent" of Kaloyan. However, considering the actual text says Nos autem audito quod de nobili urbis Romae prosapia progenitores tui originem traxerint ("We heard that your forefathers come from a noble family from the city of Rome"), it is usually dismissed as simply a hidden compliment of the Pope to Kaloyan.

Pope Innocent III in his letter to the Bulgarian King Kaloyan (Calojoannes) in 1204 addressed him "King of Bulgarians and Vlachs" (rex Bulgarorum et Blachorum); in answering the Pope, John called himself imperator omnium Bulgarorum et Blachorum ("Emperor of all Bulgarians and Vlachs'), but signed himself imperator Bulgariae Calojoannes ("Emperor Kaloyan of Bulgaria"); besides, the archbishop of Veliko Tarnovo called himself totius Bulgariae et Blaciae Primas ("Primate of all Bulgaria and Vlachia").

The Bulgarian historiography negate, while the Romanian highlight the role of the Vlachs in the uprising. However, the scientific debate reflects the nationalistic rivality from the 19-20th century, which did not exist in the 12-13th century. Vlachs and Bulgarian Slavs jointly inhabited Bulgaria, and both groups in sufferance were united against the common cause under a leader, regardless of the leader "race". The Asen brothers were associated with the Vlach population of the mountainous regions around Trnovo, Niketas Choniates recorded Vlach shamans during revolt exhibition, but nevertheless of their ethnicity, it was a joint venture of the Bulgarians, Vlachs and Cumans.[14]

The name of the dynasty comes from one of the brothers, namely Asen I. The etymology is most likely of Cuman Turkic origin, derived from "esen" which meant "safe, sound, healthy" and the Belgun nickname seems to be derived from Turkic "bilgün", which meant "wise". Further support to this connection can be found in the charters of the Great Lavra of Mt. Athos from the end of the 12th century, which mention the monastery's problems with some of the Cuman stratiotes, where "Asen" is listed as the name of one of those Cumans.[15]

Bulgarian Emperors from the Asen dynasty

The Asens in Byzantium largely descend from Ivan Asen III, who ruled briefly as Emperor of Bulgaria before fleeing to Constantinople as Ivaylo's uprising was gaining momentum in 1280. A despotes under Michael VIII Palaiologos, Ivan Asen III had already been married to the Byzantine Emperor's eldest daughter, Irene Palaiologina. The couple's five sons and two daughters were the progenitors of one of the highest-regarded Byzantine noble families of their time, along with the Palaiologoi. Among the Byzantine Asens, three bore the title of despotes, three that of sebastokrator, two panhypersebastos, one was a megas doux and two were titled megas primikerios.[17] In Greek, the male form of the family name is rendered as Ἀσάνης (Asanis) and the female as Ασανίνα (Asanina).

The Asens of Byzantium intermarried with other prominent noble dynasties, including the Kantakouzenos, Doukas, Laskaris, Tornikios and Raoul families. Notable members of the Asen family in the Byzantine Empire include: