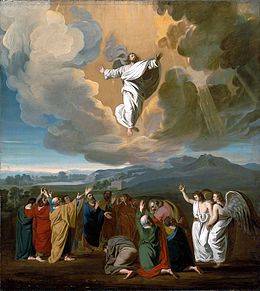 The ascension of Jesus (anglicized from the Vulgate Latin: ascensio Iesu, lit. 'ascent of Jesus') is the Christian teaching that Christ physically departed from Earth by rising into Heaven, in the presence of eleven of his apostles.[1] According to the New Testament narrative, the ascension occurred 40 days after the resurrection.[1] In the Christian tradition, reflected in the major Christian creeds and confessional statements, God exalted Jesus after his death,[2][3] raising him from the dead and taking him to Heaven, where Jesus took his seat at the right hand of God.[4]

In Christian art, the ascending Jesus is often shown blessing an earthly group below him, signifying the entire Church.[5] The Feast of the Ascension is celebrated on the 40th day of Easter, always a Thursday;[4] the Orthodox tradition has a different calendar up to a month later than in the Western tradition, and while the Anglican Communion continues to observe the feast, many Protestant churches have abandoned the observance.[6][7]

In Islam, Jesus was neither crucified nor raised from the dead, and according to the Qur’an, he was rather saved by God and raised to Heaven.[8]

Luke–Acts, a single work from the same anonymous author, provides the only original narrative account of the ascension.[9][1] Luke chapter 24 tells how Jesus leads the eleven disciples to Bethany, a village on the Mount of Olives, where he instructs them to remain in Jerusalem until the coming of the Holy Spirit: "And it came to pass, while he blessed them, he parted from them, and was carried up into heaven. And they worshiped him, and returned to Jerusalem with great joy." The corresponding scene in Matthew chapter 28 ends abruptly with the Great Commission, with no mention of an ascension, and there is a broad consensus among scholars that the brief ascension account in Mark's longer ending (Mark 16:19) is a later addition to the original version of that gospel.[10] The biblical narrative in Chapter 1 of the Acts of the Apostles takes place 40 days after the resurrection. Acts 1 describes a meal at which Jesus commands the disciples to await the coming of the Holy Spirit. Jesus is taken up from the disciples in their sight, a cloud hides him from view, and two men in white appear to tell them that he will return "in the same way you have seen him go into heaven."[11] Luke and Acts appear to describe the same event, but present quite different chronologies, Luke placing it on the same day as the resurrection and Acts forty days afterwards;[12] various proposals have been put forward to resolve the contradiction, but the question remains open.[13]

The Gospel of John has three references to ascension in Jesus' own words: "No one has ascended into heaven but he who descended from heaven, the son of man" (John 3:13); "What if you (the disciples) were to see the son of man ascending where he was before?" (John 6:62); and to Mary Magdalene after his resurrection, "Do not hold me, for I have not yet ascended to my father..." (John 20:17).[1] In the first and second Jesus is claiming to be the apocalyptic "one like a son of man" of Daniel 7;[14] the last has mystified commentators – why should Mary be prohibited from touching the risen but not yet ascended Christ, while Thomas is later invited to do so?[15]

Views on the ascension

In Christian theology, the death, resurrection, and exaltation of Jesus are the most important events, and a foundation of the Christian faith.[17][18] The early followers of Jesus believed that God had vindicated Jesus after his death, as reflected in the stories about his resurrection, ascension, and exaltation.[4] The early followers of Jesus soon believed that Jesus was raised as first of the dead,[19] taken into Heaven, and exaltated,[2][3] taking the seat at the right hand of God in Heaven, as stated in the Apostles' Creed: "He ascended into heaven, and is seated at the right hand of God the Father almighty."[4] Psalms 110:1 played an essential role in this interpretation of Jesus' death and the resurrection appearances: "The Lord said to my Lord, "Sit at my right hand until I make your enemies your footstool." It provided an interpretative frame for Jesus' followers to make sense of his death and the resurrection appearances.[20][4]

Ascension stories were fairly common around the time of Jesus and the gospel-authors,[21] signifying the deification of a noteworthy person (usually a Roman Emperor), and in Judaism as an indication of divine approval.[22] Another function of heavenly ascent was as a mode of divine revelation reflected in Greco-Roman, early Jewish, and early Christian literary sources, in which particular individuals with prophetic or revelatory gifts are thought to have experienced a heavenly journey during which they learned cosmic and divine secrets.[22]

Figures familiar to Jews would have included Enoch (from the Book of Genesis and a popular non-Biblical work called 1 Enoch); the 5th-century sage Ezra; Baruch the companion of the prophet Jeremiah (from a work called 2 Baruch, in which Baruch is promised he will ascend to heaven after 40 days); Levi the ancestor of priests; the Teacher of Righteousness from the Qumran community; the prophet Elijah (from 2 Kings); Moses, who was deified on entering heaven; and the children of Job, who according to the Testament of Job ascended heaven following their resurrection from the dead.[23][24]

Non-Jewish readers would have been familiar with the case of the emperor Augustus, whose ascent was witnessed by Senators; Romulus the founder of Rome, who, like Jesus, was taken to heaven in a cloud; the Greek hero Heracles (Hercules); and others.[16]

The cosmology of the author of Luke-Acts reflects the beliefs of his age,[25] which envisioned a three-part cosmos with the heavens above, an Earth centered on Jerusalem in the middle, and the underworld below.[26][27] Heaven was separated from the Earth by the firmament, the visible sky, a solid inverted bowl where God's palace sat on pillars in the celestial sea.[28] Humans looking up from Earth saw the floor of Heaven, made of clear blue lapis-lazuli (Exodus 24:9–10), as was God's throne (Ezekiel 1:26).[29] According to Dunn, "the typical mind-set and worldview of the time conditioned what was actually seen and how the recording of such seeings was conceptualized,"[25] and "departure into heaven could only be conceived in terms of 'being taken up ', a literal ascension."[25]

In modern times, a literal reading of the ascension-stories has become problematic, due to the differences between the pre-scientific cosmology of the times of Jesus, and the scientific worldview that leaves no place for a Heaven above us.[30][31] Theologian James Dunn describes the ascension as at best a puzzle and at worst an embarrassment for an age that no longer conceives of a physical Heaven located above the Earth.[30] Similarly, in the words of McGill University's Douglas Farrow, in modern times the Ascension is seen less as the climax of the mystery of Christ than as "something of an embarrassment in the age of the telescope and the space probe,"[31] an "idea [that] conjures up an outdated cosmology."[32]

Yet, according to Dunn, a sole focus on this disparity is beside the real importance of Jesus' ascension, namely the resurrection and subsequent exaltation of Jesus.[18] Farrow notes that, already in the third century, the ascension-story was read by Origen in a mystical way, as an "ascension of the mind rather than of the body," representing one of two basic ascension theologies.[33] The real problem is the fact that Jesus is both present and absent,[34] an ambiguity which points to a "something more" to which the eucharist gives entry.[35][note 1]

Liturgy: Feast of the Ascension

Main article: Feast of the Ascension 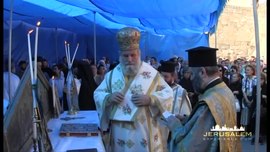 The Feast of the Ascension is a major feast day of the Christian liturgical year, along with the Passion, Easter, Pentecost, and Christmas.[6] Ascension Day is traditionally celebrated on the sixth Thursday after Easter Sunday, the fortieth day from Easter day, although some Roman Catholic provinces have moved the observance to the following Sunday to facilitate the obligation to attend Mass. Saint Jerome held that it was of apostolic origin, but in fact the ascension was originally part of Pentecost (the coming of the Holy Spirit), and developed as a separate celebration only slowly from the late 4th century onward. In the Catholic tradition it begins with a three-day "rogation" to ask for God's mercy, and the feast itself includes a procession of torches and banners symbolising Christ's journey to the Mount of Olives and entry into Heaven, the extinguishing of the Paschal candle, and an all-night vigil; white is the liturgical colour. The Eastern Orthodox tradition has a slightly different calendar up to a month later than in the Western tradition. The feast was retained at the Protestant Reformation. It continues to be observed in Lutheran, Anglican, Methodist, and most Reformed churches. Most other Protestant churches do not celebrate it as they do not adhere to the traditional Christian calendar of feasts.[6][7]

The ascension has been a frequent subject in Christian art.[38] By the 6th century, the iconography of the ascension had been established and by the 9th century, ascension scenes were being depicted on domes of churches.[39][40] The Rabbula Gospels (c. 586) include some of the earliest images of the ascension.[40] Many ascension scenes have two parts, an upper (Heavenly) part and a lower (earthly) part. The ascending Christ may be carrying a resurrection banner or make a sign of benediction with his right hand.[41] The blessing gesture by Christ with his right hand is directed towards the earthly group below him and signifies that he is blessing the entire Church.[5] In the left hand, he may be holding a Gospel or a scroll, signifying teaching and preaching.[5]

The Eastern Orthodox portrayal of the ascension is a major metaphor for the mystical nature of the Church.[42] In many Eastern icons the Virgin Mary is placed at the center of the scene in the earthly part of the depiction, with her hands raised towards Heaven, often accompanied by various Apostles.[42] The upwards-looking depiction of the earthly group matches the Eastern liturgy on the Feast of the Ascension: "Come, let us rise and turn our eyes and thoughts high ..."[5]

Olivet and the Chapel of the Ascension 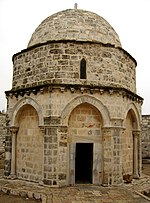 The traditional site of the ascension is Mount Olivet (the "Mount of Olives"), on which the village of Bethany sits. Before the conversion of Constantine in 312 AD, early Christians honored the ascension of Christ in a cave on the Mount, and by 384 the ascension was venerated on the present site, uphill from the cave.[citation needed]

Around the year 390 a wealthy Roman woman named Poimenia financed construction of the original church called "Eleona Basilica" (elaion in Greek means "olive garden", from elaia "olive tree", and has an oft-mentioned similarity to eleos meaning "mercy"). This church was destroyed by Sassanid Persians in 614. It was subsequently rebuilt, destroyed, and rebuilt again by the Crusaders. This final church was later destroyed by Muslims, leaving only a 12×12 meter octagonal structure (called a martyrium—"memorial"—or "Edicule") that remains to this day.[citation needed][43] The site was ultimately acquired by two emissaries of Saladin in the year 1198 and has remained in the possession of the Islamic Waqf of Jerusalem ever since. The Russian Orthodox Church also maintains a convent of the ascension on the top of the Mount of Olives.