The Ascension Cathedral (Russian: Вознесенский собор Vosnesenskiy sobor, Kazakh: Вознесенск кафедралы шіркеуі Voznesensk kafedraly shirkeýi), also known as Zenkov Cathedral, is a Russian Orthodox cathedral located in Panfilov Park in Almaty, Kazakhstan. Completed in 1907, the cathedral is made out of wood but without nails. Its height is 56 meters tall, and is claimed to be the second tallest wooden building in the world.[1][2] 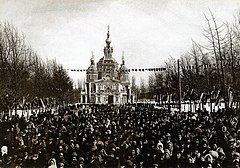 Opening ceremony of the cathedral 1907

In the late 19th century the first bishops of the Turkistan eparchy discussed the need for a Russian Orthodox Church in Almaty. On September 26, 1903, the bishop of Turkestan and Tashkent, Paisii (Vinogradov) consecrated the foundation of the church. Construction took place between 1904 and 1907.

The belfry was erected on September 14, 1906. The cathedral survived the 1911 earthquake with minimal damage, even though it was built without any nails, which some bishops attributed to divine intervention,[3] although some credit might also be given to the advanced anti-earthquake techniques invented or employed by the architect, Andrei Pavlovich Zenkov.[4]

The inner structure of the cathedral was made in art workshops in Moscow and Kiev. The iconostasis was painted by N. Khludov. After the Russian Revolution the cathedral was used to house the Central State Museum of the Kazakh Soviet Socialist Republic. From 1930 to 1940 it was used by notable public organizations. The first radio transmitters in Almaty were situated in the cathedral's belfry.[3] 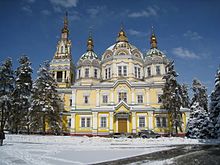 Front View of the cathedral during winter