Enlarge Tanzania Mount Meru (Tanzania)
This article is about the city. For other uses, see Arusha (disambiguation).
City in Arusha Region, Tanzania

Arusha is a city in north eastern Tanzania and the capital of the Arusha Region, with a population of 416,442 plus 323,198 in the surrounding Arusha District (2012 census).[1] Located below Mount Meru on the eastern edge of the eastern branch of the Great Rift Valley, Arusha has a temperate climate. The city is close to the Serengeti National Park, the Ngorongoro Conservation Area, Lake Manyara National Park, Olduvai Gorge, Tarangire National Park, Mount Kilimanjaro, and Mount Meru in the Arusha National Park and is thus considered the safari capital of Tanzania.

Arusha is a major international diplomatic hub. It hosts the East African Community. From 1994 to 2015, the city also hosted the International Criminal Tribunal for Rwanda, but that entity has ceased operations. It is a multicultural city with a majority Tanzanian population of mixed backgrounds: indigenous African, Arab-Tanzanian and Indian-Tanzanian population, plus a small European and an American minority population. Religions of the Arushan population include Christianity, Islam, Sikhism and Hinduism. In 2018 it was declared Arusha would be the capital city of the proposed East African Federation as it was seen as a neutral city due to its significance to the whole of East Africa.

The current site of Arusha was first settled in the 1830s by the agro-pastoral Arusha Maasai from the Arusha Chini community, south of Mount Kilimanjaro.[2]:page 112 They traded grains, honey, beer, and tobacco with the pastoral Kisongo Maasai in exchange for livestock, milk, meat, and skins.[2]:page 112 Demand for Arusha's foodstuffs increased substantially during the 1860s when the Pangani Valley trade route was extended through Old Moshi, Arusha, and ultimately to western Kenya.[2]:page 112 Although it was not yet a town, it was a regional centre and had a number of urban features.[2]:page 113

Arusha was conquered by the Germans in 1896 after the murder of the first two missionaries who attempted to settle on nearby Mount Meru.[2]:page 113 The Germans established a permanent presence in 1900 when a military fort (a boma) was built and soldiers were garrisoned there.[2]:page 113 "The boma was a solid statement, meant to impress German moral and political order on the surrounding countryside. Set on a rise overlooking the plains, the fortress-like building dominated the surrounding landscape" complete with a machine gun.[2]:page 113 Many Africans were forcibly displaced from their ancestral lands by the Germans and forced to dig lime or carry stones to construct the fort.[2]:page 114

The British took Arusha from the Germans in 1916 during World War I.[2]:page 114 German officials left the area, the British deported German missionaries and settlers, and only a skeletal military administration of the town remained.[2]:page 114 But slowly during the 1920s, civilian administration was implemented, missionaries from the United States arrived, British and Greek settlers reoccupied the former German farms, and the town grew, especially after the British moved the regional administration from New Moshi to Arusha.[2]:page 114 The extension of the railroad from Moshi to Arusha in 1928-29 greatly increased commerce.[2]:page 114 The Great Depression soon thereafter, however, squelched commerce, and Arusha in 1940 had less than 2,000 residents.[2]:page 115 Growth resumed during World War II and by 1948, the population had increased to more than 5,000.[2]:page 115 By the 1950s, Arusha was "a polyglot, westernized little town; it has a Greek community, several Germans predating World War I, and some German Jewish refugees post-dating World War II."[3] A state of emergency was declared in the Arusha region in 1953 in response to the Mau Mau Uprising. Journalist John Gunther noted at the time that "a loyal tribe, the Waarusha, threatened to take violent countermeasures against the Kikuyus themselves, if the British did not. The authorities arrested the leading Mau Mau conspirators, screened thousands more, and deported other thousands back to Kenya."[3]

In the 1960s parts of the movie Hatari! with John Wayne were filmed at Momella.

Arusha has been a crucial city in the history of modern Tanzania. Official documents ceding independence to Tanganyika were signed by the United Kingdom at Arusha in 1961. Also, the Arusha Declaration was signed in 1967 in Arusha.

The Arusha Accords were signed at the city of Arusha on August 4, 1993, by representatives of competing factions in the Rwandan civil war.

The Arusha Peace and Reconciliation Agreement for Burundi was signed on 28 August 2000 as part of a process forging peace in that country through power sharing and establishing a transitional government.

The January 2015 Arusha Agreement for South Sudan created a framework for the reunification of South Sudan's ruling SPLM party, which had splintered into three creating a humanitarian crisis as fighting between factions intensified. It provided that all SPLM members who were dismissed be reinstated to their previous positions and a secret ballot system be adopted.[4]

In 1994 the UN Security Council decided by its Resolution 955 of 8 November 1994 that Arusha should host the International Criminal Tribunal for Rwanda. The establishment of the tribunal with its foreign employees has influenced the local economy of the city increasing the cost of living for residents. The tribunal has downsized due to its closure in 2014, but its legal successor, the International Residual Mechanism for Criminal Tribunals established by United Nations Security Council Resolution 1966, will continue entertaining a branch in Arusha, opening on 1 July 2012.

Arusha was officially declared a city on 1 July 2006 by the Tanzanian government.[5]

In 2013, a quarry located in Arusha collapsed and killed 14 miners after heavy rain.[6]

Mount Meru in the background of the city of Arusha

The primary industry of the city is the service sector.

The city hosts numerous small and large businesses from retail to commercial enterprises.

The city of Arusha is home to the largest manufacturing sector in the region with breweries and agro-forest processing, and a large pharmaceuticals maker.

Tourism is also a major part of the economy of the city of Arusha, and the largest dollar-earning economic sector in Tanzania. The city is located on the northern safari circuit near some of the greatest national parks and game reserves in Africa, including Serengeti National Park, Kilimanjaro National Park, Ngorongoro Conservation Area, Arusha National Park, Lake Manyara National Park, and Tarangire National Park.

The city of Arusha is the headquarters of the East African Community and plays host to the Arusha Branch of the International Residual Mechanism for Criminal Tribunals, and the African Court on Human and Peoples' Rights.

The city is home to the famous Arusha International Conference Center, host to many international meetings.

Arusha is also a well known destination for non-governmental organizations that operate out the city in a variety of regions and aid areas such as HIV and AIDS Awareness, children's education, and micro-finance.

Among Arusha's notable districts are the Central Business Area, located by the clock tower; Sekei in the northwest, which is largely residential with a vibrant nightlife; Njiro, a middle-class rapidly growing suburb in the south; and Tengeru, a lively market-town in the east.

North of Arusha are the districts of Karatu, Ngorongoro, Monduli, Arumeru and Longido, about 90 minutes north of Arusha by daladala along the Arusha-Nairobi Road.

Arusha is served by two airports the Kilimanjaro International Airport for international air travellers, some 60 kilometres (37 mi) east, approximately halfway to Moshi. The airport provides international and domestic flights. The Arusha Airport is a regional air hub in the west of the city and serves more than 87,000 passengers yearly.

The city hosts the National Natural History Museum, which contains three exhibits on early man, plants and animals of the region, and the history of the city.[8] The natural national history museum, which is found in a 'boma', used to be an administration outpost for the Germans in the 1900s. It was opened in 1987 as a public museum and displays important assets to the scientific community such as models of Australopithecus people, human ancestors that lived over 2 million years ago.[9]

A small museum adjacent to the Uhuru monument displays information about the proceedings of the 1967 Arusha Declaration. 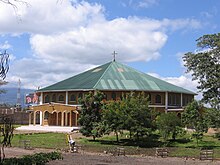 The Cathedral of Arusha (Catholic Church) 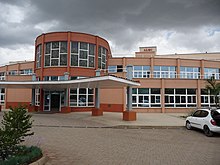 The Arcadia University hosts a film course that has led to the creation of the Arusha African Film Festival, which allows people to come and watch films created by local people. The guidelines allows a multitude of filmmakers to be taken into account for awards, and each year a new theme is chosen for the festival. The AAFF is connected to the East African Film Festival, which also gives ample opportunity for awards and credit to young filmmakers.[12]

Despite its proximity to the equator, Arusha's elevation of 1,400 metres (4,600 ft) on the southern slopes of Mount Meru keeps temperatures relatively low and alleviates humidity. Cool dry air is prevalent for much of the year. The temperature typically ranges between 10 and 30 °C (50 and 86 °F) with an average annual high temperature around 25 °C or 77 °F. It has distinct wet and dry seasons, and experiences an eastern prevailing wind from the Indian Ocean, a few hundred miles east. Under the Köppen climate classification system, it has a subtropical highland climate (Cwb). Areas to the south and west of Arusha away are classified as tropical savanna climate (Aw).

The record[14] high since records began in 2000 is 39 °C or 102.2 °F. The record low is 7 °C or 44.6 °F. Arusha averages 29.8 days per year above 32 °C or 89.6 °F – all between November and March. Arusha's annual rainfall average is 1,180 millimetres (46.46 in), mostly coming during the long rainy season from March to May. Areas immediately to the north and northeast of Arusha can see more rain and cooler temperatures due to the influence of Mt. Meru, whose rain shadow extends toward the southeast side of the mountain.

A street in Arusha town.

Arusha and the northern highlands of Tanzania experience a bimodal rainfall pattern, with two rainy seasons. Many crops are planted twice per year. The long masika rains from March through May are more reliable in Arusha than in surrounding areas because of the influence of Mt. Meru. The short vuli rains are less reliable, usually coming in November and December. The dry kiangazi season is June to October. Higher elevation areas north and northeast of the city are home to farmers growing bananas, coffee, cabbage, potatoes, carrots, leafy greens, and other vegetables. Cultivation in areas to the northwest, west, southwest, south, and southeast focuses on maize, beans and wheat. There is a significant horticulture industry, with several companies growing flowers for export to Europe. 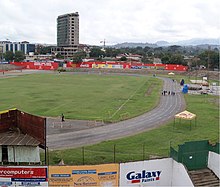 The city is home to Arusha FC, playing in Sheikh Amri Abeid Memorial Stadium, which represents the city in Tanzanian league football.

Arusha is home for the Arusha Motor Sports Club (AMSC),[18] which provides motor entertainment for the city of Arusha. It was created in 1996 with the purpose of providing "motor rallying", which was a new concept at the time for Tanzania, as a new form of entertainment. The AMSC is the largest club in Tanzania that invites foreign competitors to rally and compete for AMSC.

Arusha was the setting for the 1962 film Hatari!, directed by Howard Hawks and starring John Wayne.