Arthur Charles Erickson CC FAIA FRAIC Hon FRIBA (June 14, 1924 – May 20, 2009) was a Canadian architect and urban planner. He studied Asian languages at the University of British Columbia, and later earned a degree from McGill University's School of Architecture.[1] He is renowned for designing some of the most recognizable buildings and sites in Canada, including Roy Thomson Hall, Robson Square, the Museum of Glass and the Simon Fraser University campus.

Erickson was born in Vancouver, British Columbia on June 14, 1924. The son of Oscar Erickson and Myrtle Chatterson, he had an interest and talent for painting from an early age. Like his father, he served in the Canadian Army Intelligence Corps during World War II. It was during this time that he became familiar with the Japanese language, going on to serve in India, Celyon, and Malaysia.[2] This experience fostered his interest in the art and philosophy of these areas.

Erickson’s original intent was to enter into a career in the diplomatic service, however this changed after he stumbled upon an article about Frank Lloyd Wright. Inspired by Wright’s studio and works, Arthur pursued a career in architecture.[2] Erickson’s post-secondary studies included an undergraduate degree at the University of British Columbia, followed by the School of Architecture at McGill University. After graduating from McGill in 1950, Erickson was granted a travel scholarship and traveled in the Mediterranean, Middle East, and Japan. Travelling to these areas allowed him to deepen his exploration of climate and style in their relationship to architecture. Erickson also became a professor, teaching at the University of Oregon and subsequently the University of British Columbia.[3] After teaching, he worked for a few years at Thompson Berwick and Pratt and Partners[4] before he went on to design houses in partnership with Geoffrey Massey. In 1963, Erickson and Massey submitted the winning design for Simon Fraser University.[5]

When he started his career in 1953,[6] Erickson's earlier buildings were often modernist concrete structures designed to respond to the natural conditions of their locations, especially climate. Due to his travels to the Far East, Erickson was fond of integrating light and water into his designs, along with the characteristic horizontal elements and terraces that came from the vernacular architecture of that region.[6] Many buildings, such as the Museum of Anthropology in Vancouver, are inspired by the post and beam architecture of the Coastal First Nations. The tectonics of the post-and-beam style can also be found in the construction of Asian temples and the Canadian and American log cabin, further linking his architectural style to his travels during his education. Additionally, Erickson is also known for numerous futuristic designs such as the Fresno City Hall and the Biological Sciences Building at the University of California, Irvine. His work balanced the style of modernism with an integration of the surrounding natural environment. 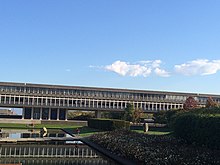 As mentioned above, Erickson’s partnership with Geoffrey Massey led to the winning design submitted for Simon Fraser University. Located on Burnaby Mountain, the unfinished concrete blends in with the surrounding geography in colour but not in shape. When viewed from above in plan, the campus forms a geometric contrast to the snowy mountains of its context. The site and scale of the project is reminiscent of utopian designs from French architects in the late eighteenth century such as Etienne-Louis Bouillee[6]. The design featured a covered plaza with massive skylights in order to respond sensitively to Vancouver’s rainy, cool climate.[7] The university provides a balance between responding to the British Columbia context while exploring the structural ambitions of the modernist period in the 1960s. Erickson and Massey's project was internationally acclaimed and allowed Arthur’s career to become more distinguished while opening the door to new possibilities.

Museum of Anthropology at the University of British Columbia (Vancouver, BC)

Built in 1976, it was created as an inclusion to the campus at the University of British Columbia. This building blends methods of reinforced concrete and the traditional post-and-beam construction to articulate the structure throughout the project. Oversized beams evoke a monumental feeling in many of Erickson's projects, calling on the size and scale of the trees found in the surrounding context. This project is designed to display the Indigenous art of the province, and is well known for Erickson’s use of concrete piers and large stretches of glass. By using concrete beams to represent dematerialized logs and opening up the main atrium through expanses of glass, Erickson refers to the traditional notion of post-and-beam construction while integrating these characteristics into a modernist building.[6]

Built in Vancouver in 1979 as a large civic center, Erickson’s design included waterfalls, a roof garden, several plazas, and stairs with ramps integrated within. This complex is one of the few in North America that integrates everything from public space and landscape to a set of surrounding buildings, spanning from the art gallery to the law courts. As time goes on, more additions are being created that seem to contrast the original intent of the design. Glass barriers were installed near the waterfall, preventing people from getting close to it, as well as on the edges of planters to prevent people from being able to sit on them. It has also since lost the outdoor restaurants, cinema, and large auditorium that once existed on the site.[8]

Designed and built in the city of Toronto, Roy Thomson Hall was not designed to blend into its surroundings in order to be recognized as a landmark and home to the Toronto Symphony Orchestra. Characteristic of Erickson's other designs with additions of water and other natural elements, this project includes a water feature of pond and rocks adjacent the building. Due to its placement below-grade, it can go unnoticed to pedestrians walking by.[9] The interior of the building was designed by Erickson's life partner Francisco Kipacz, the only Canadian published as "Designer of the Year" by the American Press Institute. The interior used a colour palette of grey and silver to harmonize with the concrete structure and create a peaceful atmosphere. This interior has since been retrofitted by the firm KPMB Architects, adding wood planking as well as purple and plum seating throughout the hall in attempt to make the atmosphere warmer.[10] 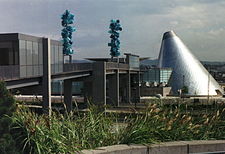 The personal selection of Arthur Erickson as the architect for the Canadian Embassy in Washington, DC by then-Canadian Prime Minister Pierre Trudeau was controversial, because Trudeau overruled the objections and choices of the embassy's design committee. Erickson's biographer Nicholas Olsberg described the building as "making fun of the ridiculous terms to which buildings must adhere in Washington... mocking the US and all of its imperial pretensions."[11]

This museum was built in the city of Tacoma, Washington, as part of an initiative to revitalize the waterfront which was one of the most polluted industrial areas in Washington in the past. Erickson's design for the museum features a 90-foot-tall metal cone erupting from a structure of steel and concrete. The enormous cone acts as a 'chimney' for the museum's amphitheater, where visitors can overlook visiting artists as they create glass art. Large public art displays and concrete plazas overlook the neighbouring waterway, while pools of water interlaced with stairs and switchback ramps to connect each levels. The museum aims to connect the downtown core to the city's waterfront as well, through a 150-foot long bridge named the Chihuly Bridge of Glass. The bridge is named after Tacoma native Dale Chihuly, who was a pioneer of the Studio Glass Movement and has many works on display at the museum.[12] 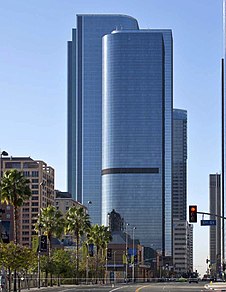 Erickson was the mentor of many other noted local architects and urbanists, including founding members[22] of many of Vancouver's premier design-oriented architectural firms. His buildings were also the subject of paintings by artists including Vancouver-based Tiko Kerr.[23]

In 1971, he received the Royal Bank Award. In 1973, he was made an Officer of the Order of Canada and was promoted to Companion in 1981.[24] Erickson received the Chicago Architectural Award in 1984 alongside Philip Johnson and Joan Burgee.[25] In 1986, he received the AIA Gold Medal, making him the first ever Canadian architect to receive this award.

Erickson lived in Point Grey with his life partner and interior design collaborator, Francisco Kripacz.[11] He died in Vancouver on May 20, 2009.[5] His legacy still lives on through the Arthur Erickson Foundation. The foundation has been registered in the province of British Columbia since 1993 as a non-profit charitable society. Founded originally as the Arthur Erickson House and Garden Foundation in 1993, the organization was created by Erickson's neighbour and fellow landscape architect Elizabeth Watts in order to raise money to buy Erickson's Point Grey home after he went bankrupt.[25] The society succeeded and became owner of the Point Grey residence in Vancouver, BC. After his death, the foundation was expanded to offer education, research, and work in preservation with stewardship, education, and tours offered to keep people informed about the legacy of one of Canada's first internationally acclaimed architects.[2]