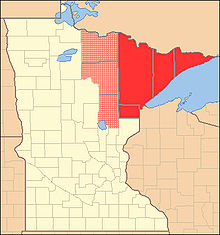 Map of the Arrowhead Region

The Arrowhead Region is located in the northeastern part of the U.S. state of Minnesota, so called because of its pointed shape. The predominantly rural region encompasses 10,635.26 square miles (27,545.2 km2) of land area and includes Carlton, Cook, Lake and Saint Louis counties. Its population at the 2000 census was 248,425 residents. Aitkin, Itasca, and Koochiching counties are also sometimes considered as part of the region. This would increase the land area to 18,221.97 square miles (47,194.7 km2) and the population to 322,073 residents.

The Arrowhead Region is quite rugged and dotted with thousands of lakes surrounded by boreal forest, and is home to Voyageurs National Park, the Boundary Waters Canoe Area Wilderness, and the Superior Hiking Trail, which lie amidst the Superior National Forest. Also located in the Arrowhead is Minnesota's only mountain range, the Sawtooth Mountains. For these reasons, a large portion of the economy depends on tourism; it is a common vacation destination for residents of the Minneapolis-Saint Paul metropolitan region.

The other primary portion of the Arrowhead economy is the iron mining industry. Taconite is mined on the Mesabi Range, shipped by train to Duluth, Silver Bay, and Two Harbors, and shipped by freighter from these ports to major metropolitan areas farther down the Great Lakes such as Chicago, Detroit, and Cleveland. In the first half of the 20th century, iron was also mined on the Vermilion Range.

The area is one of several distinct regions of Minnesota. Its largest cities are Duluth, Hibbing, Cloquet, Virginia, Grand Rapids, Hermantown, and International Falls.

The importance of waterways in and around the Arrowhead

The Arrowhead Region contains three watersheds, the Lake Superior Basin, the Mississippi River Basin, and the Hudson Bay (Rainy River) Basin. A unique geological feature is a point north of Hibbing, Minn. from where water has the potential to flow any one of three ways. The only other location that this phenomenon occurs within North America is at Glacier National Park in Montana.

Waterways have played an important role in the history of the Arrowhead Region, to include the delineation of the United States and Canadian Borders using the Pigeon and Rainy Rivers and numerous other connected waterways as the boundary. This same route has been used for centuries by fur traders for the transportation of furs, trade goods, communication, and ideas. Another significant water trade route to the interior is the St. Louis River. This route could be followed to the present day Mesabi Iron Range or could be transferred to the Mississippi River using the historic Savannah Portage. These two waterways made up the main routes from Lake Superior to the "interior," or lands west of the Great Lakes.

Naming history of the Arrowhead

Author: Writers' Program of the Work Projects Administration in the State of Minnesota.; Minnesota Arrowhead Association.

"THE MINNESOTA ARROWHEAD is a region of superlatives. It contains the State's most rugged topography, lowest and highest altitudes, its only three-way watershed, and richest iron ore deposits; its finest trout streams and best deer hunting; greatest national forest, the Superior; longest and wildest canoe trips; its most elaborately equipped schools; its largest county, St. Louis, one of the most extensive in the nation, covering 6,611.75 square miles and having, in addition to the courthouse in Duluth, two full-time auxiliary courthouses, at Hibbing and Virginia, and one part-time courthouse, at Ely.

In 1924, the Northeastern Minnesota Civic and Commerce Association sponsored an international contest for naming the area. An observing Pittsburgher, Odin MacCrickart, noted that the boundaries outlined by the association roughly suggested the form of a Native American arrowhead. His proposed name, "Minnesota Arrowhead," was adjudged best of the 30,000 letters submitted.

A glance at the map will show that the tip of the Arrowhead is marked by Pigeon Point, one side by the Canadian boundary of rivers and lakes, the base by a curving line from International Falls, through Bemidji, Brainerd, Aitkin, Moose Lake, and Carlton, to Duluth, and the other side by the north shore of Lake Superior. The air-line distance from east to west, Pigeon Point to Bemidji, is about 260 miles; from north to south, International Falls to Malmo, it is about 160 miles. The area approximates 20,500 square miles, or more than 13,000,000 acres. Included are all or parts of the following counties: Cook, Lake, St. Louis, Carlton, Itasca, Aitkin, Koochiching, Beltrami, Crow Wing, Hubbard, and Cass." 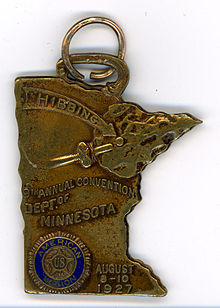 Delineating the Arrowhead Region, past, present, and future

The 1924 contest to name the unnamed region defined this region as "all or parts of the following counties: Cook, Lake, St. Louis, Carlton, Itasca, Aitkin, Koochiching, Beltrami, Crow Wing, Hubbard, and Cass."[citation needed]

The region is often defined by counties of northeastern Minn. Occasionally, Douglas County, Wisc., in the northwestern part of the state, is included in modern maps or definitions. The three main counties are St. Louis, Lake, and Cook Counties in Minn. These three make up the northeasternmost counties in the state. When an expanded definition is made, it often includes all or parts of Koochiching, Itasca, and Carlton Counties of Minn.; the other counties that are adjacent to St. Louis County to the west and south of it.

The most far reaching definitions, either on maps or in description, include Beltrami, Crow Wing, Hubbard, and Cass Counties. These are all to the west or southwest of St. Louis, Lake, and Cook Counties.

Other attempts at geographically defining the Arrowhead have been using land cover and vegetation type, hydrology, and resource extraction (logging and mining), and trying to make a geographic area fit into a generalized stone arrowhead shape.

Outside the Twin Cities, the Arrowhead Region is warmly receptive towards candidates from the Democratic Party in federal and statewide elections. None of the four counties in the region have voted for a Republican presidential candidate since Cook County voted for George W. Bush in 2000.[1]